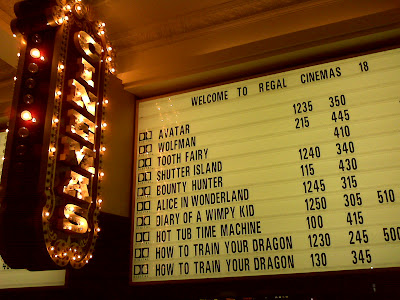 This flick centers around three friends, insurance-salesman Adam (John Cusack), dog-fitness-trainer Nick (Craig Robinson), and Lou (Rob Corddry). As we meet Adam, his girl just moved out on him....Nick is clearing the obstructed bowels of a troubled pooch (complete with Thomas Lennon cameo). The story is thrown into motion when life-long loser Lou comes home off of a bender and whether by accident or not, he ends up revving his car in a closed garage to one of his favorite Motley Crue tunes and is sent to the hospital with what is interpreted by doctors and his friends as a suicide attempt.

A suicide attempt...sounds pretty hilarious so far, right? Well to boost Lou's spirits, the gang packs up with Adam's nephew, Jacob (Clark Duke), and heads up to their old high school hangout at the Kodiak Valley ski resort.

Once they roll through town, they are 100% positive that Kodiak Valley is not the place they remembered. Old hangouts are boarded up and grafitti covered. The streets are barren and I think that I even saw some tumbleweed rolling through town.

They check in and are helped to their room by a terribly rude one-armed bellman, played perfectly by Crispin Glover (think George McFly, Charlie's Angels' Creepy Thin Guy, or most recently Alice in Wonderland's the Knave of Hearts).

The room is a dump, but it is the very room they stayed in 24 years ago when they were in town for Winterfest '86, complete with "Adam Sux Dix and Cox" inscription still scrawled on the bedside table drawer. With their experience falling far below their expectations, they decide to crack open the hot tub on their back patio and oh boy, let the fun begin!

After a short discussion on how gay it may or may not be to be naked and pounding drinks with all dudes in a hot tub; they get the party started... 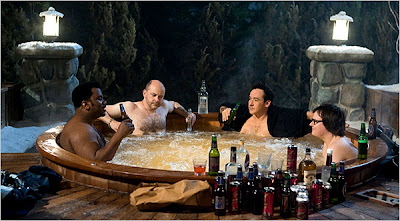 The actually time travel scene was hilarious...well shot with several sight gags that literally had me laughing out loud. It is silly yes, but given the context, pretty damn funny!

Our heroes decide when they get up....hungover and still festering in the tepid water of the hot tub, that they will go for a ski.

Very quickly, things seem off to the guys...everyone is wearing those oh so popular 1980's pastels, a guy is talking on a cell phone that in comparison is about the size of a brick, and the hairstyles, leg-warmers, and turtlenecks are spot on for the era. The guys, dumbfounded by what's going on, head for the ski lodge where their fears are confirmed....Looney Tunes dust trail behind them, their high tail it for their room. When they get there, they are met by the now (or better said, then) two-armed bellman in Crispin Glover. A younger, more polite version of his former self, you should really be thinking young George McFly here.

Thank Goodness that young Jacob was there to descibe to them the rules of space and time! I didn't mention that when we met Jacob, he was clearly into his Xth day of sitting on the couch in the basement of his Uncle Adam, living most of the time in the virtual world Second Life. He is the nerd of the group whom without the wisdom of his Stargate fan-fiction writing self, all might be lost.

In walks Chevy Chase, hot tub repairman, who spends his cameos throughout the movie spewing cryptic talk and hinting he may know that they are from the future and that he may be able to send them back. He isn't given a single funny line, but just having him around makes me happy!

The guys set out to live their life that day exactly the same way they had 24 years ago...reliving that day as a full day of folly, to PROTECT THE FUTURE! But these guys quickly get the butterfly wings a flappin' and doing things just a "little bit" different with their old man wisdom now guiding them!

The rest of the movie is the adventure and the fun! I won't go on from here, but I will tell you that I think the Universe wanted me to see this movie in the way that I did. My first crack was the 3:00pm showing at the Merriam Cinemark. 3 o'clock rolls around...no movie no previews...3:15 greets an impatient house...same deal, but we get: "the projector's broken and it'll just be a minute." Smash cut to 3:40, and they're handing out the free passes! Well I am pissed. I left work at 2:30 and Momma bear and the youngster get home at 5:30, so I am working with some semblence of a time table here!

I start peeling all around town because even though I could see any other movie, I AM IN FOR HOT TUB TIME MACHINE! My cell phone is not giving me movie times fast enough, so I call a friend who is on a LAN line and we start going through my options....AMC Mainstreet...6:00pm; nope....AMC Barrywoods...4:55pm; nope....Screenland Armour....5:00pm; NOPE!!!!

I am at my wits end when the lone light at the end of the tunnel appears. 4:15pm at Ameristar Casino's Stadium 18....I CAN DO THAT. I immediately trasform into Jack Bauer...weaving through construction zones with the dexterity of Dale Jr., I even make it there in time to catch the last half of the previews (within which by the way, I saw the trailer for THE LOSERS, and it looks pretty damn good...the counter flick to this summer's A-Team, with Zoe Saldana...nice!!).

Well as I said, I think the Universe took me to that theater! One of the bands featured in HTTM was POISON....and to that end, the music in HTTM was GREAT, including a great rendition of Jesse's Girl, by Craig Robinson....that guy's got some pipes! So Poison is a featured band, and guess who was playing at the casino that night.... 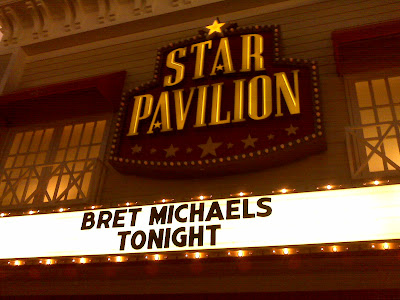 I hope everyone knows that Bret Michaels was (is?) the lead singer for Poison. When I realized that I was in the theater within the building within which Bret Michaels was playing later....I thought for sure the universe was going to have us bump into to each other...but no such luck! But I did get to see this.... 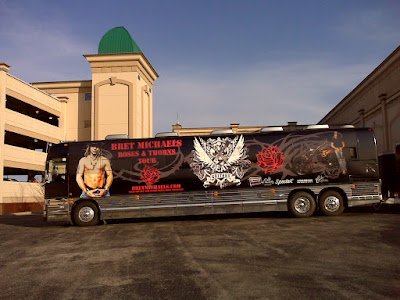 Roses & Thorns tour....oh yeah! No I did not decide to make a night of it and stay for the show!

I am going to a show tonight, though....KEVIN SMITH, BAY-BEE! I am pretty excited as I have always been a fan of Kevin's movies and I have over the last six months become a fan of SMODCAST and also now, Tell 'Em Steve-Dave and the Mo and Glo(ria) Show. His three Q&A's are must-see TV and I am thankful to Mike Schmer for coming up with another ticket in the clutch for me to tag along!

I will certainly be reporting on that soon, so STAY TUNED!

The final word on Hot Tube Time Machine is that it is TOTALLY RADICAL, DUDE...4 and 1/2 horns out of 5 from the Reel Rhino....go see it. See it with friends, see it in a crowded theater because laughs beget laughs...no matter how, just go and see it. It is the comedy I hoped She's Out of My League would be and while I don't think that HTTM will beat How To Train Your Dragon this weekend, but I hope it comes close!