The Reel Rhino Continues to Exist

I have been really, really busy and I have succumb to the curse that befalls most folks that write for any reason, be it professionally or casually...no time.

I do live to write...in 5th grade I won the regional writing award for poetry...I even remember the first few lines:

A look to the future,
A glance to the past,
From cavemen to dinosaurs,
Astronauts to cats.

Yes, that was the AMAZING first stanza that won me a $50 savings bond and also the chance to read said poem at the Millcreek Township school board meeting.  In fifth grade, that was on par with national publicity.

So I really do love to write and I would love to write on a more professional level (maybe someday), but for now, this is my venue.

That is the upside...it is my venue and I can write once a month, or once a day, and its all good.  Just know that if I had my way, it would be more often than less.  I love you guys, I do!  Yeah, its getting misty in here!

So, seen any good movies lately?

Here's a short and partial list of what I have seen since I last wrote:

As for what I have seen, I wanted to give you a list of must-sees from my list above... 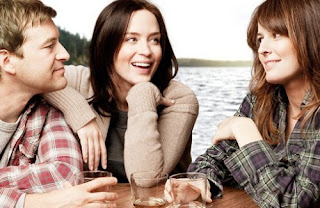 Your Sister's Sister - 4.5 Horns - An indie flick starring Rosemarie Dewitt, Emily Blunt, and Mark Duplass -- DUPLASS IS A GENIUS actor (and director) - see also Safety Not Guaranteed, Jeff, Who Lives at Home, and THE LEAGUE! 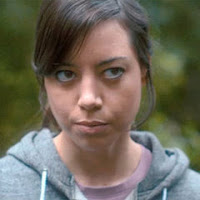 Safety Not Guaranteed - 4 Horns - Awesome indie comedy drama that made it to the mainstream theaters for two weeks...starring Duplass and AUBREY PLAZA...everyone loves April from Parks and Rec, and she is channels in Plaza's performance here as well!  This flick is an indie dramedy that by the end, becomes an indie dramedy SCIFI flick!

The Sound of My Voice - 4.5 Horns - Creepy indie drama...the second larger release after Another Earlth, from Brit Marling...she has writing chops and in the lead role of Maggie, the leader of the cult at the center of this film, this indie drama is also indie sci-fi, that delivers a twist that is well worth the price of admission! 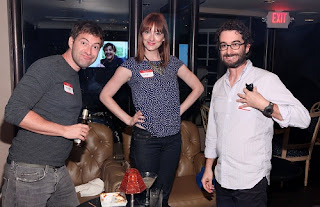 Jeff, Who Lives at Home - 4.5 Horns - I was a quivering mess by the end of this MARK DUPLASS directed flick...yes it was co-directed with his brother Jay, but this is the third entry for Duplass in my must-see list.  Mark Duplass is phenomenal in general, and he and his bro deliver here in a well told, tightly woven story that seems to be all over the place while managing never to lose you!  And holy S, RAE DOWN CHONG is in this thing!  Where has she been!

Prometheus - 4.5 Horns - Sir Ridley Scott demands to be seen.  His touch is golden and his flicks rock, consistently!

The Amazing Spider-Man - 4 Horns - A story I didn't know needed to be told, actually was told quite well. I think for his delivery, Andrew Garfield is a superior Spidey, but Spider-Man 2 remains my favorite of the Spider-Man flicks!

The Dark Knight Rises - 4.5 Horns - Just a phenomenol end to Nolan's run!  This flick was awesome!  Much more story-centric than the previous two, it will be my #2 in the series, but only a close second to The Dark Knight.  Ledger and Eckhart delivered in a way that may never be matched again in comic book fare, but Tom Hardy did a damn fine job as well.  Bravo to everyone involved in this flick.

I was dissappointed by: Ted, The Watch, and Savages.  That is all I will say about the negative...

Well...its good to see you all...check out some of the flicks I mention above...you will not be disappointed!!

BURNED FILMS returns to school us on TED

My delinquency continues and I yield the floor again to Burned Films, whose writing continues to wow and amaze...we are lucky that he chose to opt out of Magic Mike...although, Tanning Chatum is actually pretty bearable and Magic Mike looks decent...yeah, I said it.  I may see it tomorrow if only to see it in a theater packed with ladies, for the ambiance. 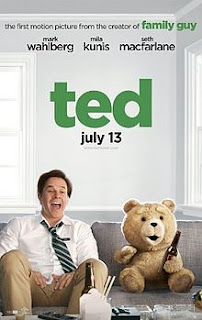 TED
Family Guy’s creator Seth McFarlane first feature film Ted is a story of a little boys Teddy Bear that comes to life because of his wish.

When I first heard about this idea about a little boys bear coming to life I thought it might be funny.  I am a huge fan of Family Guy so I hoped there would be some damn good comedy involved. I saw the Red Band trailer in front of that stupid ass movie “The Dictator”; by the way the “Ted” trailer was the best part of the film. I lost count at how many times he said the F-WORD. I was laughing so hard just from the trailer that I had tears in my eyes. So I knew I would be seeing this film.

So the film starts out, with little 8 year old John Bennett asking the suburban Christian kids who celebrate Christmas by beating up the neighborhood Jew, if he can beat the Jew up too.  But lo and behold, the Jewish kid who is getting his butt kicked by all the other kids won't let little ol' John in on the action.

Christmas morning John opens his present from Santa to reveal a cute Teddy Bear. He names him Ted. They are best of friends, and thunder buddies for life. Given the disappointments John has experienced in the lack of friends department, John wishes upon a star that his best pal would be real.  Yep, he comes to life, and almost makes John's parents have a heart attack. 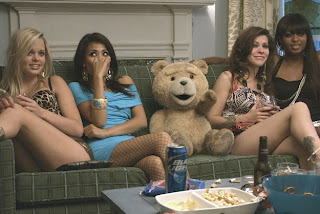 Ted is a worldwide star...even appearing with Johnny Carson on The Tonight Show. But even a talking bear becomes old hat after a while and, a quarter-century later, Ted suffers the fate of many other child stars, indulging in major substance abuse while living in the past and mooching off others.

Now almost 30 years later Ted (Seth McFarlane) is a raucously funny goof, boozing, pot-smoking, foul-mouthed, horn dog, who by the way still manages to get the ladies with no penis, and he has talked to Hasbro about that issue. Ted is a teddy bear who would be instant new best friends with The Hangover guys. He is living with a now 35 year old John (Mark Wahlberg) and his girlfriend Lori Collins (Mila Kunis). John works for a car rental company, and is very happy with his low paying job.  The plot thickens when Lori wants John to ask Ted to move out, and John is forced to choose between the love of his life, or his life-long Thunder buddy. 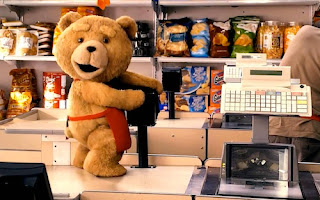 The CGI done on TED was awesome. No complaints. I feel like this was a live version of an episode of “Family guy”, and loved every minute of it.

I thought the acting in this film was good enough. Not great, but they got the job done. A lot of surprise cameos in this one.  I was very surprised that this movie had heart and good character development, with an all around good story. This film will keep you laughing all night. They have jokes in there that made my jaw drop. I literally choked on my drink on one particular joke.  You will laugh.  Not too many films serve up laughs that just keep coming from beginning to end (SEE ALSO: THE HANGOVER). The interesting aspect of some of the humor...Ted says things that really would only be funny coming from a little teddy bear.

The bottom line if you love Family Guy or American Dad then you are going to love this film. I highly recommend you go see this movie and just enjoy the hell out of it.  Sure it has some flaws, but honestly the film is a whole lot of laughs, and crude sexual humor. Leave your thoughts at the door and laugh your ass off.
~~~~~~~~~~~~~~~~~~~~~
Thanks Burned!  Good to have you again...be good broheim and to all of you out there in film land, head out to the theater soon....until later, take care!