Over the past 3 weeks, I have been travelling, was sick a full week, and no I am in training for some work stuff (the chemical development of gunshot residue in a forensic setting).  I have been very, very busy and my only regret has been not a lot of time to write.  I have put intermittent thoughts down, but if this flows poorly, I apologize.
With that... 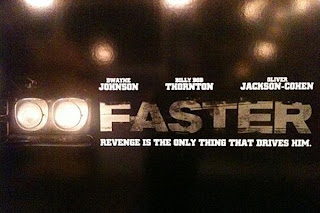 I did have the opportunity to see The Rock's latest offering FASTER.  From the preview, Faster seemed to be a run of the mill action flick.  It was not.
George Tillman Jr. is filmmaker from Milwaukee, WI. He is not exceptionally well known by the film going community and his biggest movie to date has been MEN OF HONOR, the very well told story of the life of Carl Brashear, the first African American to become a Master Navy Diver.  An earlier film also well received was the family-centric story in SOUL FOOD.  He has also found success in producing, with involvement in the BARBERSHOP series and also ROLL BOUNCE.
Here in Faster, Tillman may occasionally use too much flash and style where good ol' story through action would have sufficed.  But even with some telegraphed plot shifts, this story is told with enthusiasm and care.  It seems as though Tillman is passionate about this movie and he has a great star to communicate that passion through a well-acted, action-packed film.
The Rock as DRIVER has good company in Billy Bob Thorton as COP and Oliver Jackson-Cohen as KILLER.  A slew of other name actors make this a stellar cast, including Tom Berenger, Mike Epps, Jennifer Carpenter, Maggie Grace, Xander Berkley, Moon Bloodgood, and Mr. Eko himself, Adewale Akinnuoye-Agbaje.  Also in the "Do You Remember?" category... Courtney Gains playing TELEMARKETER...you may recall his terrifying turn as Malachi in Children of the Corn and his frightening but hilarious turn as Hans Klopek in The 'burbs. 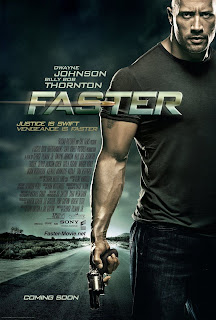 This movie is the story of a man driven by rage and revenge. In case you missed it, The Rock is now just Dwayne Johnson, and in my opinion, deservedly so. Mr. Johnson can act. I'll pause for a moment to allow you to reflect on this, but I am whole-heatredly a Dwayne Johnson apologist and I even list The Rundown as one of my all time favorite and FUN action films.
Faster is not a fun movie in the same regard as The Rundown, but this is an altogether different kind of movie. This flick jumps into the action with both feet and it doesn't stop until the credits roll. This movie is a hard R both in theme and in content. There is a high volume of brutal beatings and shootings, but of the best kind for this type of flick.
Yep, the cast is worth the trip to the theater but this picture as a whole was enjoyable all around.  It is a completely enjoyable revenge flick that doesn't fall short in the blood and bullets department.  Don't get me wrong, it is no Kill Bill, but it does deliver 4 horns of 5, so says The Reel Rhino.
In the meantime, I also had the chance to see TANGLED, Disney Animations latest offering and their 50th Animated Feature ever! Congrats to the Mouse House!! 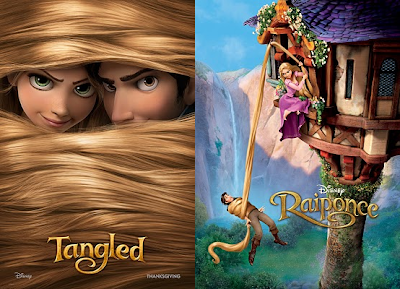 Tangled stars Zachary Levi and Mandy Moore in the leads as Flynn Ryder and the titular Rapunzal.  This movie blew my mind! Generally speaking, it had the spirit of all my favorite Disney movies from my childhood.  Great adventure, beautiful hand-drawn animation, wonderful animal characters, and very unique side characters that both add to the story and standout on their own.  They chose to leave a page IN the Shrek playbook.  There were NO dick and fart jokes at all!  No groin punching! Nothing at all to taint the fun that was to be had.

It was enjoyable in every sense and I think this was a great coming out party for my man CHUCK!  Zachary Levi was excellent in the role of Flynn Ryder, our somewhat fearless hero.  Mandy Moore did a great job as well and boy can she sing!

Next up...127 Hours, the latest offering from the uber-hot auteur Danny Boyle, last year's Oscar winner for Direction.  He has an amazing filmography and I am quite sure I would watch him direct Children's Theater! 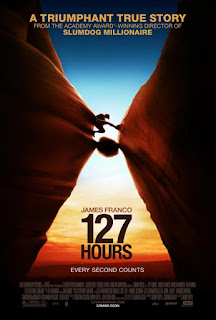 127 Hours stars James Franco.  He is 95% of this movie, and he owns every minute.  The movie tells the story of Aron Ralsten, a mountaineer and canyoneer, who in 2003 was trapped while climbing in Utah.  He fell and a huge rock slipped, pinning him "Between a Rock and a Hard Place," the title of his book that the story is based upon.

So yeah, knowing that he survives kinda spoils the ending, but the ending is a forgone conclusion that is spoiled even in the title.  Yep, it takes 127 hours for Ralston to free himself.  The actual scenes of him breaking free were disturbing, but only as it sends you into the mindset of contemplating the will power it must have taken to do what he did.,

The movie plays out in odd form.  The first third is Aron out and having fun and living life the way he knows how.  In the wild and on his own.

Boyle weaves together a great narrative from a subject that could have been very one-note.  This movie is vivid, colorful, and lively.  I left this film thinking that there was nothing I couldn't overcome.  It was truly a triumph of the human spirit.

James Franco is a tour de force in the truest sense of the phrase.  Over the past year, he has played a recurring role on General Hospital.  An exercise in acting to further stretch his already very dexterous acting chops.  His one-man show would make an excellent double featue with People's Sexiest Man, Ryan Reynolds' BURIED, which I have previously reviewed.

See this movie.  See it at the theater.  Take the message from this film and realize nothing is so difficult that the will of man cannot overcome the obstacle.


5 of 5 horns from the Reel Rhino
In this mess of movie-going, I also had the chance to catch Harry Potter and the Deathly Hallows, Part 1.  Wowza! I cannot wait for Part 2, because this is some epic that is rounding out very nicely.  I gave HP 7 a "Hell Yeah 5 Horn Salute!" 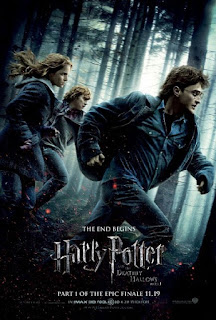 I think that is all for now...till later, here's hoping those people who at this very minute are getting into The Tourist.  I am not a huge Angelina Jolie fan, but I do like Johnny Depp.  Also, the trailer is brilliant!  My favorite lines...
He tried to kill me!
Well, that's not that serious!
When downgraded from murder, no.  But when upgraded from Room Service, it's quit serious.
Also, a big week for trailers! TRANSFORMERS: DARK SIDE OF THE MOON broke this week and while we didn't get a great look at any action, if I am not mistaken, that big mamma jamma at the end sure looked a lot like Unicron.  Any thoughts?  I am a self-proclaimed Bay-apologist and I have a special fanboy spot in my heart for all things Transformers!
Till next time, take care!
The Reel Rhino
Posted by: Ryan M. Rezzelle