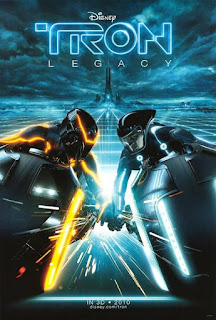 Yowza! I don't know why anyone is complaining about the script for this movie! I remember very few lines of dialogue from my recent visit to The Grid!  But I remember very vividly the mesmerizing look of the 3-D and that vivid blue and orange glow as well as that hypnotic score by Daft Punk.
TRON: Legacy is well worth the trip to the theater and I do recommend visiting the IMAX rather than the standard sized screen.  Size matters, folks.
The story is set in modern time and ENCOM, the company Kevin Flynn (Jeff Bridges) founded in the 1982 original TRON film is the Microsoft of the day.  The majority stockholder is Sam Flynn (Garrett Hedlund), son of Kevin Flynn, but he is a silent partner with no real concern for the direction of the company.  The chairman of the board and their board of directors have taken the company in a much different direction than originally envisioned by the elder Flynn.
The rough of the story is this....Kevin Flynn disappeared in 1989 and his already motherless son, Sam, was left to live with his grandparents.  Kevin Flynn's old friend and business partner Alan Bradley (played in 1982 and now by Bruce Boxleitner) receives a page to Kevin Flynn's old office at the iconic FLYNN'S ARCADE.  Sam goes to investigate and while trying to find out the purpose of the computer in his father's hidden office, he is drawn into THE GRID. 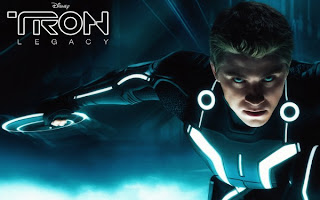 The Grid is the computer world, inhabited by programs, as made by the elder Flynn so long ago.  The world he created is now his prison. 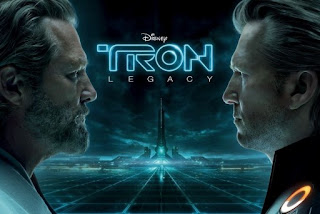 Sam is very confused and overwhelmed at what has happened to him, but being star-quarterback style geek-saavy, he seems to adapt is quickly.  He is captured by agents of the reigning government, who take mis-behaving programs either to be re-programmed or to the games arena where they perform in to the death arena games.  This is a Disney movie, so "to the death" in a world populated by computer programs is only as graphic as the programs disintegrating into a sea of pixels and cubes that fall to the ground like sawdust.
Sam's goal throughout the movie is singular: to find his father.  When he is taken to the games arena, he is recognized by CLU, a program created by Kevin Flynn to help govern the grid.  It just so happens that CLU is the spitting image of the young 1989-ish Jeff Bridges.  So in this movie, we have the digitized Clu and the more realistic elder presented Kevin Flynn.  When Sam meets Clu, he thinks he has found his father as Clu looks exactly like Kevin Flynn when Sam last saw him.  Sam very quickly figures out the order of things on the grid.  He is thrown into a light cycle battle and he must escape the games arena if he is to figure out anything about what is happening. 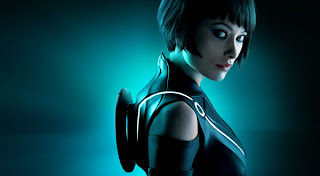 The X-factor in his escape and a major sub-plot concerns Quorra (the lovely Olivia Wilde).  She is living with Flynn off-world, far away from the grid to avoid detection.  Quorra is his friend, assistant, understudy, or something to that effect, but it is clear they care for one and other in something of a parental type relationship.
Clu wants to get to Kevin so he can take his identity disc, which is something of a skeleton key for The Grid, being that Kevin was its creator.  Sam wants to get to his father.  Quorra is just enamored by it all and really just wants to live and be free.
Jeff Bridges channels el Dudarino a bit in his portrayal of the elder Kevin Flynn.  He has been living a Zen life, and he talks and walks like someone wise.  There are religious connotations as Flynn is continually referred to as the creator and worshiped to some extent by many of the inhabitants of the grid.  Both of the Flynn's are users...they bleed, they exist outside of the grid, and they are the bane of those who follow Clu.
Quorra in many regards is channelling a bit of Leeloo from The Fifth Element...beautiful and curious, but deadly as anything.  ("Leeloo Dallas, multipass." - I love that flick!) 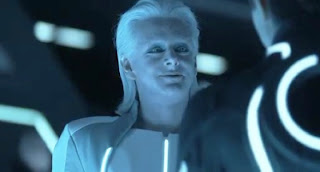 Finally, perhaps the most lively character I've yet to mention, is that of Zuse, who is played brilliantly by Michael Sheen.  Think Johnny Depp's the Mad Hatter meets Malcolm McDowell's Alex from A Clockwork Orange.  He is stellar in this role and he steals the screen when it comes to actually acting rather than just looking good.  This movie mostly looks spectacular but Sheen's performance is palpable and you can't take your eyes off of him.
Much of the conflict from within comes from a life-form called isorythmic algorythms, or ISO's.  Flynn discovered the ISO's in the computer world and saw them as a means to cure the real world of many ills and disease.  His fate was not so, as he was trapped in the grid, rather than being able to make this miracle discovery and now it may be too late as when he was forced to move off-world to protect himself, there was an ethnic-cleansing performed on all ISO's...a genocide....or was there?
The Daft Punk score is wonderful and they actually have cameos in the movie, as DJ's at Zuse's club.  Their outfits are a bit retro sci-fi and they look more like Storm Troopers than DJ's, but I'm not complaining.
The visuals are breathtaking and the 3-D world is a labyrinth within which you can easily be lost.  The first 25 minutes are in flat 2-D and it isn't until Sam enters the grid do things get into the well-crafted depths and textures.  This movie is just the type of film that is perfect for this kind of exhibition and boy their work to make it look good shows.
See this movie, it is everything that is wonderful about big-budget blockbusters.  The story is not terrible...there are a few errant characters and tangents that the plot takes, but like I said, who cares!

I could have watched this film with just the score and been almost just as happy - it is more about the EYEgasm than anything and dammit there is a plot there, regardless of what the "experts" say!  Grab your popcorn and drink and settle in, this flick is just over 2 hours long.  It is rated PG and I think that is fair.  There really isn't any language or situations that would push it into the PG-13 realm.  I give it a very solid and respectable 4 of 5 horns and recommend you see it ASAP, and that means you too MALONKA!

I should say that the first TRON is very much regarded as a classic. I agree with this sentiment and a recent viewing reinforced how ahead of it's time it was. Compare 1982's TRON to 1999's The Matrix and the quality difference is stark. Compare the original to Legacy and there is no comparison. We are jaded by the stellar effects possible today. Legacy is a great effects movie, regardless of what 'they' say. It looks beautiful and while just above par for other similar films, it is still worthy of note and it demands to be seen in the big-screen theater environment. 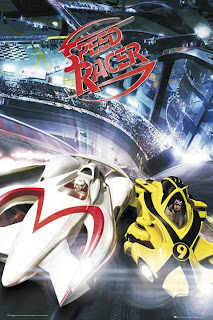 Perhaps I am too forgiving (keep in mind, Speed Racer was my favorite film of 2008 and I STILL think it deserves another look from both haters and those who just overlooked it!)

Here is my point: if something is bedazzling, then be bedazzled! Don't hold movie to an unfair standard when really, there is a high level of entertainment and our uber-critical perspectives can sometimes cause us to miss the tree for the forest. I may laugh at dancing popsicle sticks, but at least I am laughing!


I've got some movie watching to get to!  Either The Fighter or Black Swan is next up and I am catching One Flew Over the Cuckoo's Nest on DVD right now.  The Shining last week and now this...70's Nicholson is phenomenal!
Until later, take care!
The Reel Rhino
Posted by: Ryan M. Rezzelle