Reel Rhino (lite - as in lights out)

So my power is out.  Again.

While it wasn't documented, I am quite certain that a tornado ripped through my neighborhood last night.

We were spared, but some of neighbors fared less well...I think from the Blogger app, all picts will be at the bottom, but check them out...that's a hundred year old oak, as we'be been calling it.

In the meantime, I did have a chance to see Fright Night.

Very solid flick that I enjoyed very much.  4.5 Horns for this remake of the 26 year old horror classic.

Collins Farrell is hit or miss for me, and this is a hit in his role as the swarmy and deadly vampire, Jerry.

Antonio Yelchin is someone that at this point, I think I would watch in anything.  From his great turn in JJ Abrams Star Trek reboot to Defiance to Charlie Bartlett...this cat's got range.

Toni Collette is great as is Imogene Poots as the damsel in distress to Yelchin's hero.

There are some similarities to the original, but it is different in both story and in visual appeal.  Missing is some of the campiness of the original, but a well developed story is the result, so fat and happy, am I.

There are some great 3-D enhancements , so choose wisely and see this in glorious digital 3-D.

Oh yeah...McLovin' alert, McLovin' alert.  Christopher Mintz-Plasse is in the house and yet again, I find him completely enjoyable (see also: Role Models).  I would even argue that he is stunningly leading MSN handsome in some of his later scenes in the flick.

Finally, the character of Peter Vincent is pure gold.  Culled from the 1985 film, the casting is great and some of the funnier moments come with him on screen.

I say 'funnier', but again, much of the camp is gone with laughs found here in the firm of throwaway one-liners here and there in a very well composed screenplay with a tone I had hoped Disblo Cody would have given us with Jennifer's Body.

Again, 4.5 Horns for this.  My text finger is tired, so I shall take my leave of you. 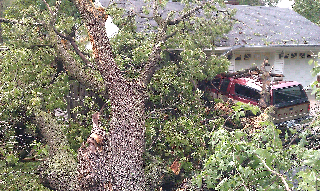