The Beginning of The Era of the Moviegoer!!! 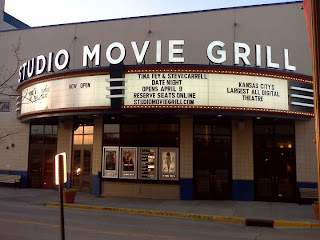 THE BATTLE IS ON!!! I mentioned a few posts ago about the Studio Movie Grill....or maybe it was on Facebook that I mentioned it.  Regardless, this is a new theater that has opened in Zona Rosa....a mere one-half mile from the AMC Barrywoods, which currently accounts for about 80% of my moviegoing.  This just in.....GET READY TO RUMBLE!
A juicy tidbit that had AMC employees looking both ways before talking to me is the fact that AMC BARRYWOODS in Kansas City was WITHOUT the Steve Carell and Tina Fey led comedy, DATE NIGHT. Yep, you heard it here....A BLACKOUT!!!  Due to a competition clause, AMC Barrywoods Theater was not allowed to run Date Night because the right to exhibit the movie rested with Studio Movie Grill (SMG)....AMC was not allowed to show the picture!  The #1 movie in the country this weekend was Date Night and they couldn't even show it.  Clash came in a close second, and of course it was there, but this must have been a devestating blow to the AMC numbers! (Pre-Post Update...CLASH BEAT DATE NIGHT!)
I have many friends that work at AMC by nature of my attending 150 plus movies a year. I like those folks, but my primary allegience lies with myself.  I hope severely that (1) the SMG being the sole exhibitor for several upcoming BIG movies (2) their wider variety of specialty flicks (PLEASE, PLEASE GO VISIT: http://www.horrorremix.com/) and (3) the fact that they offer real-meal food....will all add up to better prices and offerings from both movie houses!
As a side-note, I know for a fact that AMC Barrywoods will not being carrying MacGruber or The Killers straight out of the gate.  Who knows what else will fall to the other side of Barry Road....but, enough about that, but I will keep you posted as there are new developments!
I saw two movies this weekend and that's allllllllright... (channel Matthew McConaughey circa Dazed and Confused)
First, THE BLACK WATERS OF ECHO'S POND... 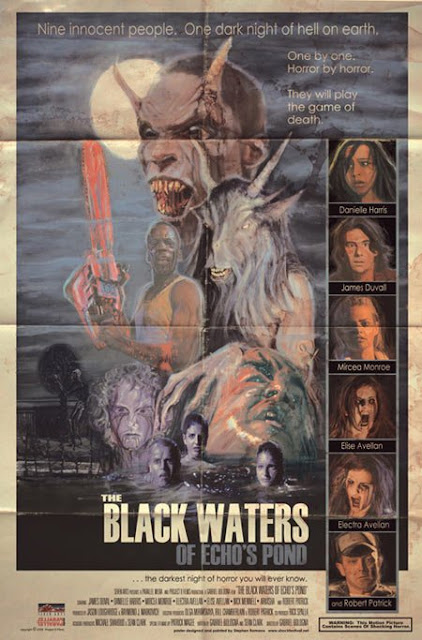 The Black Waters of Echos's Pond is seemingly an Indie horror flick that is quite ambitious at its core, but was lacking....something...I just couldn't put my finger on it.  I will say my overall impression was one of enjoyment, but primarily because of the hokeyness.  How hokey you ask? 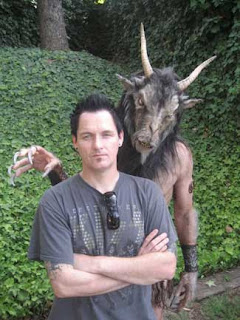 Well pictured here with producer and co-writer Sean Clark is our main evil-doer, the Greek God Pan.  Seen in this publicity shot with Smith here...in complete daylight and for all to see, this is as masked as the costume gets throughout the feature.  During the worse than so bad its good opening, we see a fleeting glimpse of ol' Pan.  It is his game of temptation and truth that fuels the plot forward and in each shot throughout the movie, you see more and more of this Willow-era quality costume.  We've come a long way from Willow and I wish the filmmaker here had pulled more of a Jaws/Spielberg situation....less monster for more suspense scares.  Even the island's guests, as they took turns taking on the spirit of Pan, shift to a clownish-like mask of black goo. 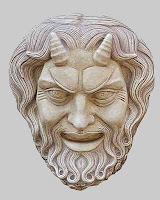 Well Robert Patrick takes a turn a the country bumpkin, island owner and primary inhabitant.  Holey Shamolely....what is the T-1000 doing in this?  Ol' Agent Doggett has to eat too, I guess.  I say all that tongue-in-cheek, mostly because I applaud the filmmakers for making this movie.  They have done what I would love to do, but lack the drive to really, really try....make a movie.
This movie stops short of decent horror and is missing something to fully qialify it as schlocky B-movie deliciousness.  I recommend seeing ti with friends, preferably a beer or two deep, and to take it at its face value and not to compare it to the Exorcist or Evil Dead.  It is neither, but has some decent kills and also the second (as far as I know) appearance of the Crazy Babysitter Twins from Robert Rodriegez's Planet Terror: 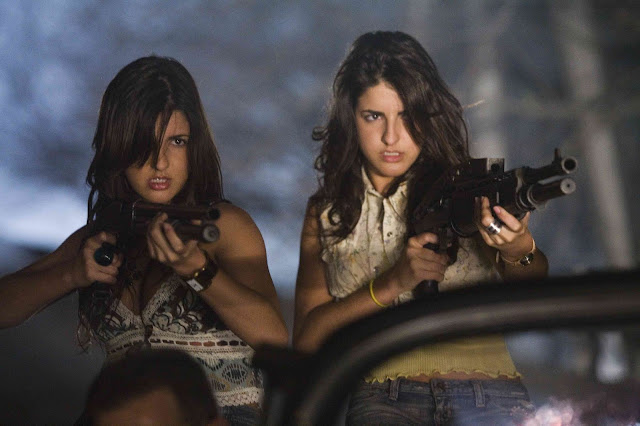 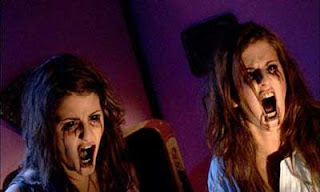 They are pretty hot and creepy as seen here in Echo's Pond...


A decent, watchable movie in which Gabriel Bologna (the co-writer, director) is reaching quite a bit, but I didn't hate myself for seeing it.
REEL RHINO RATING for BLACK WATERS OF ECHO'S POND: 2.5 horn (of 5) 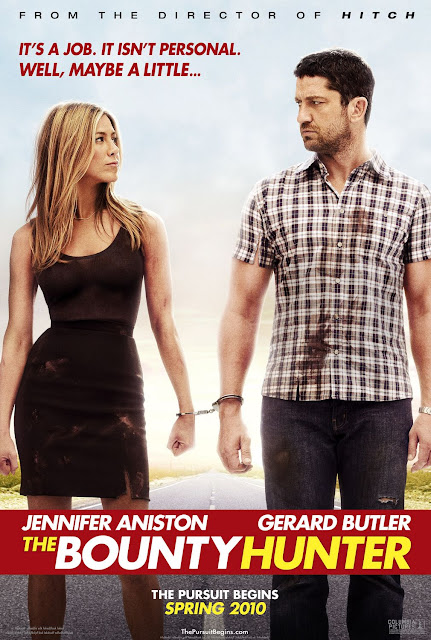 The Bounty Hunter suprised the crap out of me...I was expecting what has become stan dard Gerald Butler RomCom flub.  I got a vague feeling of "Fletchery" while watching this.  Not a direct Fletch feeling, but just in a roundabout way, which made this in my opinion, more of a guy's version of a chick flick, than a straight-up chick flick.
The story is basic, following Gerald Butler as a bail bondsman who, after a bit of eposition, is tasked with chasing down his bail jumping ex-wife, played by Jennifer Aniston.  As a side note, ol' Jen is as hot as ever, not that I was paying attention to that kind of thing :-)
The concept of this movie is fairly basic and everywhere you would expect a joke, it delivers.  The upside is that in addition to the ball-punching slipstick antics, there is some witty dialogue as well.
I think this would be great as a date movie or as a standalomne for all you lonesome moviegoers out there (don't worry, I include myself in that group as well!).
Reel Rhino's Rating for THE BOUNTY HUNTER: 3.5 horns
Well as I am tyoing, my eyes are growing heavy...I'm outta here for the night.  To avoid shennaigans, I will save it and dole it out to you tomorrow.
Till later...
RR
Posted by: Ryan M. Rezzelle