Clash of the Rhino While He Trains His Dragon 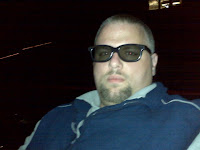 CLASH of the RHINO
THE REEL RHINO checking in folks! I hope everone had a great movie-going week....I know I did!

This past Wednesday, I was graced with a hallowed MID-WEEK MOVIE! My folks were in town and they were lock stock and two smoking barreled-up to hit the casino, while young Jackson was at his Daycare Easter party.......that left Daddy with nothing to do and we all know what that means!  I went and saw How to Train Your Dragon in eye-popping REAL-D...

On that note, I think I have made my ruling...I think that the general picture quality of the Real-D is actually BETTER than the IMAX 3-D.  I am still holding out judgment on the Real-D vs. Disney 3-D debate, but for now, Real-D is for me.  I think it is mighty convenient also that ALL of the 3-D vendors have agreed and have commenced a planned 20% ticket price increase in 2010 on all 3-D shows.

NEW YORK (CNNMoney.com) -- Ticket prices will be going up at movie theaters across the country this weekend as the entertainment industry looks to cash in on growing demand for 3-D movies following the success of "Avatar" and "Alice in Wonderland." Starting Friday, prices for adult admission to 3-D movies will increase an average 8.3% at box offices nationwide, according to market research conducted by investment firm BTIG. Ticket prices for IMAX movies are expected to jump 10%, while prices for regular 2-D movies will rise about 4% on average.


At one AMC theater in New York, the price for a family of four to see a 3-D screening of Dreamworks Animation's "How to Train your Dragon" this Friday will be $63 before popcorn, soda or candy.  A spokesman from AMC declined to comment, and Regal did not immediately respond to a request for comment. "These are major prices changes for an industry that has historically instituted gradual prices increases," said BTIG analyst Richard Greenfield.  Greenfield said the price hikes reflect a growing belief among theater owners that consumers are "hungry" for 3-D content and are willing to pay more for an enhanced movie-going experience.  Box office sales nationwide are up nearly 10% so far this year, due in part to the record-breaking success of 3-D blockbusters like "Avatar" and "Alice in Wonderland."


Gray warned that 3-D technology has come and gone in one form or another over the last five decades, and the current popularly could prove to be nothing more than another fad. Much of the success or failure of this year's 3-D fare will depend on the quality of the story, he added.   "If consumers absorb the price increases without issue, we believe it bodes well for the pricing power of the movie exhibition industry, particularly their highest quality product," Greenfield said.

Personnally, I think the whole moviegoing affair needs to be revamped in favor of the moviegoes in terms of pricing, accommadations, AND more respect paid by all to the movie-going environment.  I mean...really? 3-D goes up $1 per ticket at AMC....that's a 20% increase...AND...they have raised concession prices again.  There will be a tipping point, but when?  High prices at the theater really help foster piracy as well.  I know they are not directly related, but there is some cause in the high price of entertainment.

Welll back to my midweek movie go....How to Train Your Dragon was an absolutely fun ride!  It was 3-D done right and animation seems to be the place for 3-D, that is unless your name is James Cameron!  I had no intention on seeing this movie and the timing and opportunity played its role to guide me to it.  I will say, HTTYD was a sworn enemy of mine due to the whoopin' it laid on Hot Tub Time Machine Last week.  I must say, that holding one against the other is an unfair comparison, but this really is a stellar flick!  The Real-D 3-D was eye popping and seemless and the aerial scenes were great!  The story was much better than I ever would have imagined, and this was by far, the best use of Craig Ferguson to date,  Also, I made a comment a few weeks ago about my belief that Jay Baruchel didn't have the ability to carry a flick....well he might nor be Tom Cruise just yet, but I think he held his own and did a great job.  I think he was hilarious in Tropic Thunder and I do think he will have a bright future.  I was not impressed with his portrayal of the '5' in She's Out Of My League.  The REEL RHINO says: 4.5 horns!

Let me start by saying that there were TWO...count 'em TWO crying babies in the theater throughout my Clash of the Titans show (ALSO REAL-D).  Typically, the crying baby problem ruins my movie-going day.  I was completely taken out of Drag Me To Hell (although I loved that flick anyway!!) and I was pulled out of this one too, but not as much since most of the action drowned out the crying.

Let me also say that I absolutely LOVE the 1981 Clash of the Titans. Ray Harryhausen's stop-motion animations/puppetry was a beautiful kind of art and the original Clash had loads of character.  I also grew up a child of the 80's and I remember very much watching this movie with my Dad shortly after we first got cable.  The original Clash became a cult classic but it tried to exist in 1981 as something more.  Sir Laurence Oliver played Zeus, Ursula Andrews (aka the ORIGINAL Bond Girl) played Aphrodite, and even Professor McGonagall (Maggie Smith) had a role.  Harry Hamlin, aka Mr. L.A. Law, was Perseus...is it too touch to reference the 80's with the 80's?  Hamlin also more recent roles in Veronica Mars and Harper's Island, as well as voicing Perseus in God of War II.

The 2010 edition is being unfairly criticised for being "too modern"....some are saying that this version loses the kitschiness of the original by taking out the Harryhausen and dropping in CGI and 3-D.

Let me say that I believe it to be blatently apparent that Louis Leterrier was paying homage to the original.  In addition, to say that the 2010 edition is all show and no story, I say WHATTTTT!!!  It is Clash of the Titans!  It is not Shakespear!  It holds true to some the outlandish story components of what made Greek and Roman mythology the wild adventure it actually is. 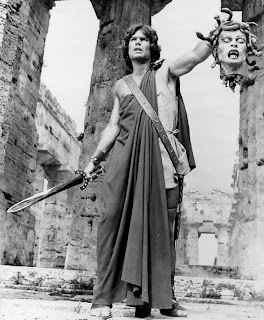 
To boot, I think that this movie actually DOES hold true to the HERO'S JOURNEY...

All in all, I really enjoyed this....the Real-D was great and the effects in general were great.  It was evident that Ray Harryhausen was not a part of this effort, but many people who were cared as much as the 1981 production crew and it showed on screen.

Defy the so called critics...go see this flick.  It is a fun movie that is also "pretty" to watch.  What more could you want for an afternoon at the movies! 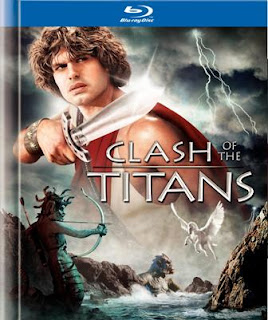 The Reel Rhino says 4 horns for Clash of the Titans....check it out! Also, check out the original that was re-released on March 2nd on Blu-Ray....

Also check out the comparison of the original to the new issue here:

Till later...
THE REEL RHINO
Posted by: Ryan M. Rezzelle