Reel Rhino Review: George A. Romero's Survival of the Dead

George A. Romero's Survival of the Dead 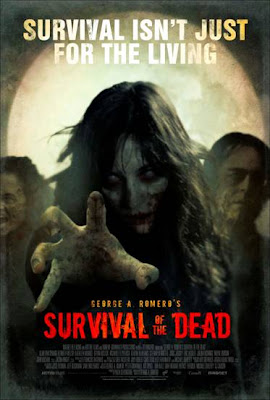 Let it be known....The Reel Rhino loves horror movies! I remember being scared half to death in the 80's watching movies about a decade outside of my age range.  I always loved the splatstick horror/comedy cross-overs, and minus the most "serious" of his entries (Night), George A. Romero's "Dead" films have always been there to both frighten and delight!.
We have here, yet another entry into the "Dead" series from the Grandfather of the Zombie, George A. Romero. His (un)holy trilogy from 1968 (Night of the Living Dead), 1978 (Dawn of the Dead), and 1985 (Day of the Dead) have long been revered as required reading by lovers of all things horror. The '00 years have brought on a zombie resurgance with 2005's Land and 2007's Diary, neither of which are as classic as the earlier entries, but they are loved still by Romero fans. Survival is likely to fit this same bill.
This film was released first at the Toronto International Film Festival (TIFF) in 2009 and will receive a theatrical release this year from Magnolia Pictures.  It has received moderate reviews coming in at 5.5 on IMBD and a 44% on Rotten Tomatoes.  Sadly, I think that many critics will hold this candle against the spotlight of films like I Am Legend, 28 Days Later, and the Zack Snyder remake of Dawn of the Dead.  These are all spawn of Romero and his films and while SURVIVAL is different from the more modern take on the walking dead, it should be considered for what it is...the work of a master artists whose canvas is an intricately woven world in which the dead don't run, but walk, and yet are still quickly getting the better of the waning human civilization.
By no means is this the best horror film you will ever see, but it is classic Romero. I personnally enjoyed both Land and Diary and as I type, I am enjoying SURVIVAL OF THE DEAD.  Nobody (except maybe Sam Raimi) blends gore and laughs so successfully. Romero is a consumate example of how powerful independent film can be. He has always maintained control over his projects and the result, as it always has been, is a great blend of scares, laughs, and an overall good time. 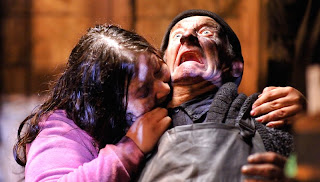 An interesting aspect of this flick is that it is set at around the time of the initial "outbreak". An opening title tells us it is 6 days out from the initial occurance of the living dead. In the Romero univese, that would be 1967. But while Romero is floating forward and backward through time, he is apparently also taking the liberty of resetting the timeline as well to current tech. Lines from this film: "You call that thing a computer?" "I think it's cool!" "This is cool." And the hip youngster among our travelling band pulls out an iPod touch. I don't think that iPods were around in '67. But rather than continue to make period piece after period piece, Romero is being flexible. Sir, you are forgiven. Even more interesting is that our band of travelling National Guardsmen, who the story follows along, basically began this adventure at the end of Diary of the Dead, when they were commandeering the vehicle of Diary's protagonists.  This marks the first cross-over (I believe) of characters from episode to episode of the DEAD series. 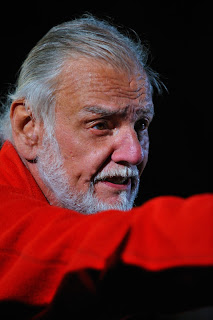 As I said, the story follows a band of National Guardsmen (and one Guardswoman) who have gone AWOL, which certainly is forgivable as the world is headed towards zombie apocolypse. They are trying to get to get to Plum Island, off the coast of Delaware.  After robbing the protagonists from Diary, they go on their trek to find zombie free land and Plum Island, they think, is the answer.

Plum Island has only ever been inhabited by two families, who also happen to be warring Irish factions...the O'Flynn's and the Muldoons.  I guess the patriarch of the O'Flynn family can be seen as the protagonist. He is in support of killing the already dead...putting the zombies out of commission. He leaves the island in a sort of protest as the Muldoons are more in favor of keeping the living dead "alive". He leaves the island and returns when the AWOL guardsmen find him about going back to Plum Island, perceiving it as a spot they can convert into a sanctuary.
It is a fun entry into the Zombie-trope and I enjoyed it thoroughly. It is a ZOMBIE MOVIE people! Give it a little latitude and suspension of disbelief. If you do and consider it appropriately, you'll have a good time too!  It never takes itself as seriously as many critics have and a movie should only be taken as seriously as it takes itself. 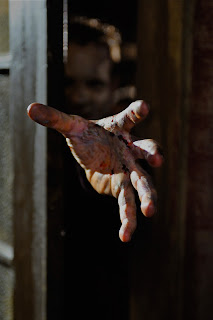 Survival of the Dead is AVAILABLE NOW in a pre-theater release on Time Warner On-Demeand, Video-on-Demand, Amazon rentals, Playstation, among a few other venues you may be able to find it. It was a little steep at $9.99 for the 2-day rental, but for the priviledge of seeing it before it hits theaters, I'll take it! I don't know how wide of a release it will get, so catch it while you can or wait until the fall for the DVD release.
GEORGE A. ROMERO'S SURVIVAL OF THE DEAD gets 3.5 horns out of 5 from the Reel Rhino
It in a solid entry into Romero's Dead series. If you do check it out, maybe brush up with the original Dawn or Day, as the remakes were more thematically related than tonally. 1985's Day is especially great and the special features on the Special Edition DVD are GREAT! I like movies in which zombies can run...but NEVER, EVER, NEVER, NEVER in a Romero.  Check out the green band trailer below or try and hunt down one of the two red band trailers.  ENJOY!!
RR 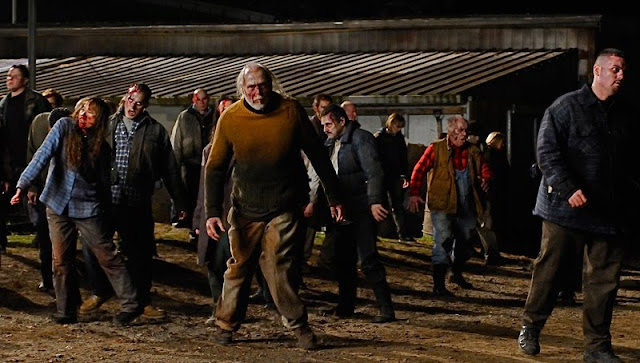