Robin Hood vs. Iron Man ~ Fight to the Death? 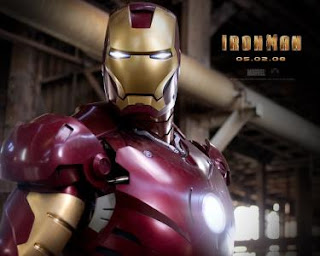 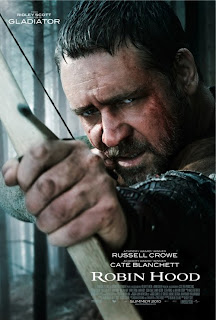 
IRON MAN vs. ROBIN HOOD
This is not my review of Robin Hood.  I'm sure that'll actually take some time and thought to put together.  This is more of a plea of lieniency for the sake of Ridley Scott and Russell Crowe!
I actually believe that Iron Man will take the weekend. It will be close, but I predict 58 million for IM2 against 50 million for Robin Hood. Letters to Juliet will certainly screw things up as men nationwide are torn from more testosterone-laden fare for the girly-flick Letters to Juliet...in the words of Amanda Seyfried:
"It's super romantic!"
I saw Robin Hood earlier today on a day-off. We had the misfortune of experiencing a CSI-marathon of 36 hours earlier this week, which consisted of working a scene, taking a nap, and then more working the scene.  That, coupled with my heading in tomorrow to teach a photo class, led me to escape the clutches of work for a day off to enjoy a flick, and play with my boy.  The boy part is loads of fun, except he is currently draining fluids in the form of drool from his mouth, boogs from his nose, and by the smell of things, this is the least of my problems.  The poor lad does have a wicked cold, though, but he doesn't let that stop him from crawling up a storm.
Anyway, back to what I was saying.  ROBIN HOOD stars a bevy of big names who are as shining as ever in each of their respective roles.  Is it me or is Mark Strong the offical face of villians everywhere, suddenly (Sherlock Holmes, Kick-Ass, Robin Hood, etc...)?  ROBIN HOOD is a GOOD and SOLID action flick.  It did not blow my socks off and contrary to popular belief, it is not just GLADIATOR set in a different era.  RIDLEY SCOTT can direct his ass off and RUSSELL CROWE would be enjoyable playing a tree in a petrified forest.

I say it is not a Gladiator redux, and that is correct....but it doesn't have the same aspirations of greatness that GLADIATOR had.  There are some similar themes between the two flicks, but it is in fact a different movie altogether.

After you see IRON MAN 2 for the third time this weekend, head over and ALSO check out Robin Hood.  It is well directed action with a great cast telling a different spin on a tale that we have unfortunately heard countless times over.

Errol Flynn vs. Cary Elwes vs. Kevin Costner vs. Russell Crowe...who gets you vote?  Check out Robin Hood this weekend then let me know.
It is an acceptible entry into the summer movie line-up and you should check it out.  It gets 3.5 out of 5 horns from the Reel Rhino and I will post my full review as soon as I get it finished.
For now, leave those workplace blues behind and head out to your local multi-plex for some good 'ol overpriced popcorn corporate America presented fun!
Till later...
RR
Posted by: Ryan M. Rezzelle