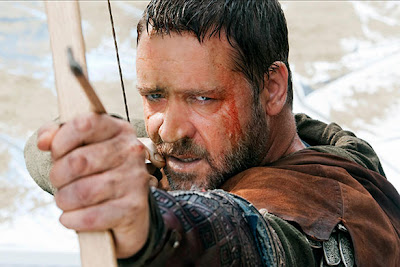 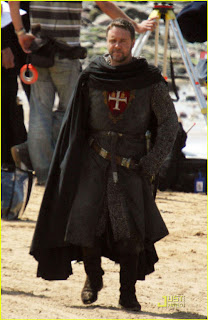 Douglas Fairbanks, Errol Flynn, Kevin Costner, Sean Connery, Brian Bedford (in voice only), and Cary Elwes have all donned the tights. Now it's is time for Maximus to take his shot. Russell Crowe skips the tights and goes for more period-proper attire. A battle robe, a cape (very conservatively used by these men of the hood), and a head to toe number that comes off as Carhartt-chic.
Costuming aside, Robin Hood is a well told tale of Robin Hood the man, before he became Robin Hood the legend. Why are people slighting this effort because it stars and is directed by the duo who brought us GLADIATOR. Gladiator was a great film! ROBIN HOOD is an enjoyable film.
Toe to toe, Gladiator wins every time. It is a better story, more original, and just makes me feel warm and fuzzy each time I hear Crowe spout to Commodus:
"My name is Maximus Decimus Meridius, commander of the Armies of the North, General of the Felix Legions, loyal servant to the true emperor, Marcus Aurelius. Father to a murdered son, husband to a murdered wife. And I will have my vengeance, in this life or the next."
Which is only slightly better than and also one of my favorites to: "Hello. My name is Inigo Montoya. You killed my father. Prepare to die."
Well with Robin Hood, we get something as noble as the Gladiator line, and perhaps a bit easier to remember (no spoiler as Crowe reads it in the trailer): "Rise, and Rise Again; Until Lambs Become Lions"
The primary difference between this and Gladiator deals directly with the hero's journey. In Gladiator, Maximus was a hero from the word go. He was a battle-tested, revered General who fought for Ceasar and won. In Robin Hood, Robin Longstride is but a noble archer, in the King's conquering army. It could be argued that he is a leader, but when he gives the King a bit of lip, he ends up bound in the stockade. Not quite the hero's introduction one would expect. He serves King Richard the Lionheart with respect, but given the circumstances that develop, he quickly decides that a solo journey is the best route to a happy life. 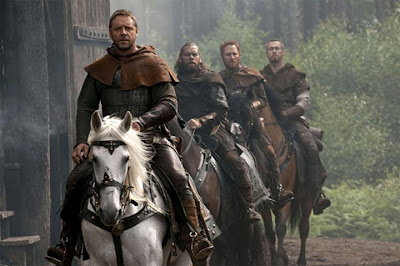 I say a solo journey, but of course along for the ride are his Merry Men, played perfectly by Kevin Durand, Scott Grimes, and Alan O'Doyle. I don't know about you, but even with a believable accent, Grimes will always be Sgt. Donald Malarkey from BAND OF BROTHERS. Durand has the most character development, and even it is a little light for regular merry man LITTLE JOHN. Durand is a bulky cat. He has had a number of recognizable roles, most notably and recently as Martin Kearney on Lost.
Friar Tuck is personified perfectly in Mark Addy and he has a nice story line through the flick. He is appropriately underused as the tone of the film does its best to remain more solemn than comedic, although there are a few chuckle-moments.
The only question mark of a character was William Hurt. He really serves no purpose and I think writing out his part would have sliced the flick down from 2 hrs 20 mins to a more enjoyable stretch. Perhaps they are building his character for the sequel, which has certainly been set up here.
Cate Blanchett and Max Von Sydow play daughter (Maid Marion) and father (Sir Walter Locksley) and their dynamic is excellent. Early in the film, Maid Marion's, husband is killed in battle and Robin Longstride having sworn a blood oath, is the bearer of the news and to return the sword of the son to the father. Von Sydow is the acting tour de force of this effort, playing the elder Locksley as well as any role in his recent past. Von Sydow is to Robin Hood as Richard Harris (R.I.P.) was to Gladiator. Yeah, I know...if it isn't like Gladiator, why keep drawing the damn conclusion! 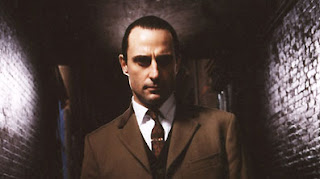 Baddies are afoot including a great run by Mark Strong as a marauding Frenchman and Oscar Issac as Prince John. Two things...is Mark Strong the official bad guy of all movies...Blackwood in Sherlock; Kick-Ass, etc...Also, is he the bargain bin version of Andy Garcia? Actually, I really like Strong's performances in all of these flicks, but the first time I realized that was seeing him (RocknRolla), I really thought he was Andy Garcia!
This is a solid flick and it is intended to be watched in the theater. Ridley Scott is truly a great director of our day and he creates beautiful worlds. I don't know that there is any Oscar-bait here, minus a best-supporting nod, perhaps, but all of the primaries are in top form and it makes for an easy to enjoy few hours.

I have a music-crush on a local Kansas City band called The Elders, who play traditional Arse-kicking Irish rock. Some of the tunes belted out by the Merry Men remind me of the musical sounds of the Elders, which was a bonus for me.
My biggest complaint comes when considering the rating. This is a PG-13 offering and I think a slight increase in the colorful words department and perhaps some on-screen bloodshed would have greatly added to the overall enjoyment. I don't need to see blood and guts or hear f-bombs a plenty to love a movie. But again, holding this candle up against Gladiator makes it impossible not to notice. CASH is the motivator for a PG-13 and the Big Hollywood Machine keeps on a rollin'.
All in all...a solid 3.5 horns out of 5 from the Reel Rhino.
Tune in next week and I will pick apart MacGruber, which until recently had a tomatometer rating of 100%. if not for the recent addition of Top Critic, The Hollywood Reporter's John Defore's rotten rating. Defore's rotten rating has dropped the score to 89% as of this writing, which I think sadly, will be the first of many drops in the score for this SNL small screen to big screen jump. But we shall see!!!
Stay tuned!
RR
PS...Who's your favorite Robin Hood of all time? Vote in the ReelRhino.com Blog Poll!
Posted by: Ryan M. Rezzelle