A Plethora of Cinema: A-Team; Greek; and; Splice 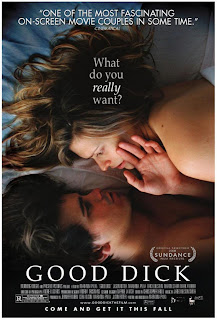 Hello boys and girls!  It's been a little while since I've been able to wax poetic on my recent filmgoing experiences.  It's good to be back.  I am warming myself up watching some GOOD DICK...a 2008 drama (with small bits of comedy) about a video clerk (Jason Ritter...son of the late John Ritter) who tries to strike up a relationship with an introverted gal who comes into his video store for the sole purpose of renting porn.  The girl is played by Marianna Palke, a Scottish lass who also wrote and directed the flick.  It's just starting, but let me say, I hope that she is spinning that Scottish accent.  UPDATE: I watched Good Dick until about 2am last night, and I was fading in and out.  Firstly, no Scottish accent! BOOO! I just watched it again and I will say it is a decent movie that generally speaking, is pretty dark.  I abosultely love that this gal wrote and directed it...mucho indie cred here!  A great filmmaking-centric website too...check it out at:

http://www.gooddickthefilm.com/HomePage/homepage.html
But enough about Good Dick, which among other things, is just FUN TO SAY...let's get on with some more current stuff! 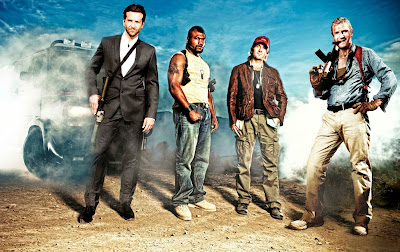 I saw the A-Team this evening and I  haven't been able to stop whistling that damn tune!  My only regret is that the rest of the movie is not nearly as catchy as the theme.  I like what Joe Carnahan did with Narc and I really really had fun with Smokin' Aces; but I think that he relied too much on campiness and nostalgia here.  This was a decent story for a summer blockbuster but there was just "something" missing.  Each actor did sweet justice to the original character they were portraying...this flick was  cast perfectly!  I am glad to see Sharlto Copley in another role...he was great in District 9 and he will certainly be one to watch in coming years.  Before District 9, Copley was working on his directorial feature called Spoon, which is about a man who blacks out in times of high stress.  Hop over to First Showing to learn more and definitely check out the trailer!: http://www.firstshowing.net/2010/06/01/watch-this-teaser-for-sharlto-copley-directed-indie-spoon/
But enough about that...more about the A-Team.  I enjoyed many of the different comedic moments, but one-liners were not enough to carry the whole flick.  Carnahan relyed quite a bit on the close-up to extreme close-up, which is typically reserved for the more dramatic moments in a film.  Carnahan used these shots predominently through every fight scene, which was not so good.  I would have love this movie with better shot fight scenes, especially given Neeson's (TAKEN) and Jackson's (MMA) presence and even Bradley Cooper who compliments Ryan Reynolds as the other half of my Man Crush combo. 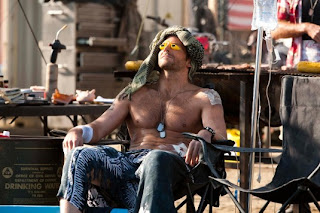 Jessica Biel's Lt. Former Capt. Sosa speaks the line: "...AND THEY SPECIALIZE IN THE RIDICULOUS!"  She was right.  Some of the sequences are ridiculous, but it is definately a good ridiculous.  Again, some improvements in some of the shot choices would have made this component much more enjoyable as well....but they were enjoyable none the less. 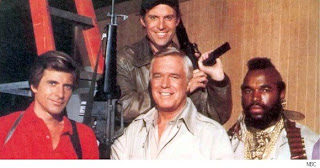 All in all, a 3 out of 5 horn situation from the Reel Rhino.  Not a stellar rating from someone who is usually a mad lover of the summer blockbuster.  There were some decent moments in the stingers after the credits, but there was something auspiciously missing!  You'll know what I mean when you see it, but you have to stay to the very very end of the credits.  (hint hint rhymes with BEE and starts with MISTER). 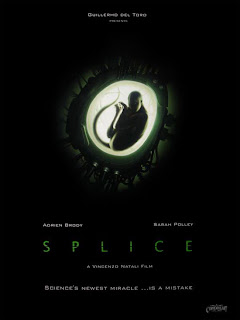 No, this is not Species.  Let's get that out of the way immediately.  This is wholely something completely different.  Species was based on recoding human DNA based on an alien message....Natasha Henstridge got naked...shenanigans ensued.  In industry vet Vincenzo Natali's first major release, Splice, we are following along with two geneticists, Clive Nicoli and Elsa Kast, played by Adrian Brody and Sarah Polley (I have always loved Sarah Polley and it was great to see her back in a mainstram release!).  They decide to splice together human DNA with a bunch of other species of animals...no one gets naked....shenanigans still ensue.

This movie begins in a genetic research lab where our protagonists have created a very basic hybrid organism that was designed to breed valuable compounds and proteins for commercial uses.  Clive and Elsa are boundary pushers and Elsa decides that to prepare for the sucess of Fred and Ginger, their bio-created organisms.  She wants to pre-emptively answer the question:  "What's next?".  They (mostly she) decide(s) that in order to answer this, they need to create a lab-born hybrid grown in part with human DNA...cue the shenanigans. 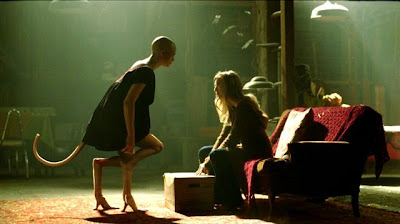 DREN is the result.  Early on, by the standards of "normal", Dren is disformed and in fact only grows arms after a decent amount of time out of the "womb".  She walks on hands for feet, and is reverse-jointed at her lower legs.  This is where both the similarity begins and ends with Species.  Yes, Dren is a new organism born partly of human DNA.  As we learn more about her, she becomes more interesting (and deadly).  The stark difference from Species is that while that was a full-scale call out the army blowout; this is a relatively small story, focusing on Dren's interaction with Elsa and Clive.
Yes, their experiment is met with interesting results...but to pull from an old quote from Maxim magazine: "THEY HAD NO IDEA HOW RESULTY IT WOULD GET!"
See this movie at the theater...reward creative filmmaking by seeing these movies where they were ment to be seen.  Natali does a great job telling the story and while it isn't a traditional monster movie, it is a fun one none the less.
SPLICE gets a 4 out of 5 horns from the Reel Rhino.
GET HIM TO THE GREEK
This was by far the best of the bunch.  Nicholas Stoller's Get Him to the Greek broaches into the pre-Funny People Apatow era: story, characters, substance. I was originally thinking 4 but have re-evaluated and am putting this is at 4.5 of 5 horns...so back off Belushi! The characters are hilarious and while there are some gut-busting moments; the characters have depth, which pushes this film from just plain funny into the realm of a great film in the vein of the zeitgeist of filmgoing. 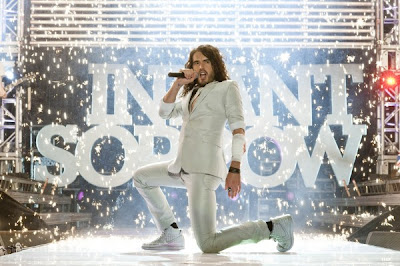 Russell Brand is a comedy genius.  He delivers the material, but he is a loveable dope that becomes quickly endeared to the audience.

Jonah Hill has come into his own as well.  Previous supporting roles have served to build an impressive resume and we know know that he can in fact act, without dropping an f-bomb every other word.  Watch out for Cyrus later this summer, in which I think he will shine!  Although, there was some colorful dialogue that added to the comedy, the best moments in my eyes were those with drama.  Story mattered here and I truly felt moved as our characters delivered heartfelt exchanges that made me actually care about what happened to them. 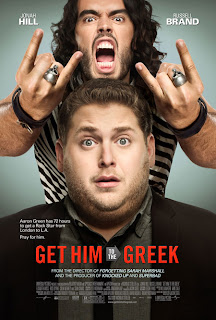 Rose Bynre as Maggie Q has a great minor role and her songs through the movie make Infant Sorroe's "Inside You" from Forgetting Sarah Marshall (heard here also) seem like a lullaby!  Definatly check those out.  Speaking of cameos, P Diddy is this year's breakout, in the vein of Tom Cruise's spot in Tropic Thunder.

More to come soon from the Reel Rhino! Upcoming discussions will feature previous releases Prince of Persia: The Sands of Time and and a full-on art house edition featuring The Secret in Their Eyes.

Check out the trailer for Scott Pilgrim vs. The World embedded at the bottom of the page.  That is a movie that looks like plain old fun and is my #1 looking forward pick of the summer!