Broken Lizard's The SLAMMIN' SALMON...and a word on KILLERS

I am coming off a damn busy week!  I am not reviewing a new release for the weekend edition of REEL RHINO.  My son was baptised yesterday and we still have family in town.  Last week was hectic....so hectic that I HAVEN"T BEEN TO THE THEATER IN 8 DAYS....(huuu....huuuuu....huuuuuuu) ~ that was me hyperventilating.  I will....WILL...be going to see something later today....mark my words.
Instead, I am going talk a little bit about THE SLAMMIN' SALMON...this is the current offering from BROKEN LIZARD, the hallowed comedy group who have brought us the classic Super Troopers as well as some of my favorites, but perhaps the less classic Club Dread and Beerfest. 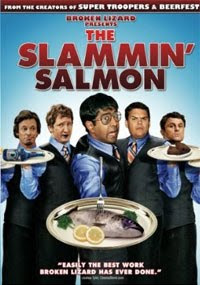 At current, the Reel Rhino says 2.5 out of 5 horns, for this unfortunately mundane entry into their trope. It should be noted that this is the directorial debut for our beloved Officer Farva, Kevin Heffernan. There were a handful of funny moments, but where Super Troopers has a great start-to-finish story that was both interesting and hilarious; The Slammin' Salmon comes off as more of a series of SNL skits, relying far too much on the physical comedy than witty writing.
The story follows The Champ, Cleon Salmon, played with some panache by the looming presence of Michael Clarke Duncan. All of the Lizard regulars check in for this entry as well.  The Champ issues an edict that the staff of his restaurant, The Slammin' Salmon, has to do $20K in business in one night to allow him to repay a mob debt to the Japanese Yakusa.  He actually only needs $10K, but he comes up with a sales contest so that the top seller on the night will win a $10K bonus.  The Champ will be happy, the contest winner will be happy, and the Japanese Yakusa will be happy. Hilarious situations ensue? One would think...I had much higher hopes for my favorite group of Massachusetts Staties, but I guess that this was a straight to DVD release should have been a warning as to how this would turn out. If REPEATED VIEWINGS change my opinion, I'll let you know. 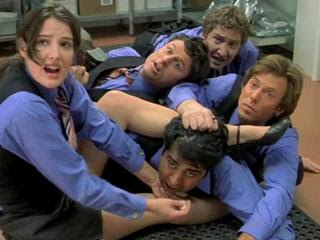 What is really funny is that a few days ago with my family in town visiting for above said Baptism, I suggested to my brother that we watch SLAMMIN' SALMON together, explaining to him that I wanted to see it a second time to see if I actually liked it.  It was at this time, that he reminded me that we ALREADY HAD watched it together, sometime around 4/23 and that we had a few laughs, but it we agreed that viewing that it was nothing great.  I find this hilarious, because apparently, I wasn't overly impressed the second go around, or at least enough for me to even remember seeing it again.  I guess I'll stick with my original 2.5 out of 5...here's hoping MUCH BETTER next time from Broken Lizard! 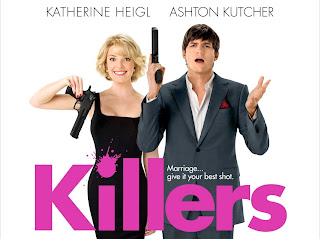 On a side note, when I first wrote the draft for this post a month or so ago, I posed the question: Trailer for KILLERS...Could it possibly be good?
Please, let me answer that question right here and now with a resounding no!  For an example of the terribleness that is afoot, just look at this poster!  What exactly is it conveying?  It has no direct bearing on the movie, as to say, okay Katherine...smile, smile...great work.  Ashton.... look frustrated...now throw your hands up in despair...great shot!  That's a wrap!  In addition to the flick being pretty bad...THIS IS ONE OF THE WORST MOVIE POSTERS THAT I HAVE EVER SEEN!

I avoided talking about Killers in my prime time reviews because it didn't deserve it.  It was a decent, albeit worn, premise that had a few decent laughy moments; BUT... there was no chemistry between our leading lady and gent and there was NO ENDING!  It was one of the most abrupt, unsatisfying endings I have seen in a long time!  This movie was very much a let down....1.5 out of 5 horns from Reel Rhino!!  Don't get me wrong...I saw a few moments of hope in the trailer, but that was just sharp editing.  Do not see this at the theater.  Only see it at home if there is nothing else to watch for it is at best, very remotely entertaining.
Posted by: Ryan M. Rezzelle