My Dilemma with The Dilemma 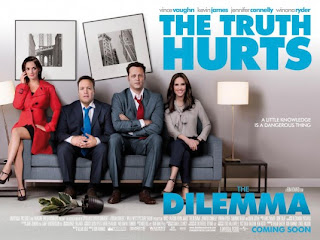 I saw The Dilemma today and I truly am faced with a dilemma myself.  This movie was moderately entertaining.  I, being the hapless moviegoer that I am, was entertained.  But like I mentioned in the last post on The Green Hornet, there was just something missing.
Let's talk about the good for starters.  Ron Howard has finally given us something worth watching, after his back to back steaming piles of pop-culture crap, Angels and Demons and The DaVinci Code.  I have heard from others who read with greater regularity, that more often than not, the books are better than the films.  Perhaps that I read both Angels and Demons and DaVinci, I was predestined to dislike them.

I went into THE DILEMMA with a clean slate.  I have enjoyed Ron Howard before and I knew that he was fully capable of redeeming himself.  This film is an exit from Howard's standard and I thought to myself that this could be a good thing.  To be honest, The Dilemma seems to have been completely competently directed, but my chief complaints come from that enigmatic something.  That aspect of a movie that makes it great, but seems to have eluded this offering.

(And also to be fair to Howard, in between the Dan Brown adaptations, he did give us 2008's Frost/Nixon, which did make my best of list for that year.) 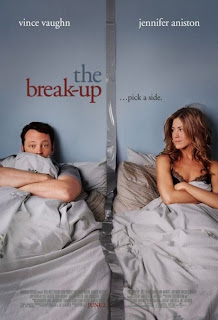 Now if you read my last post on THE GREEN HORNET, you are familiar with what I mean here.  Lots of good stuff on screen, but a cloud of mediocrity looms that keeps the sun from fully shining on the film.  Speaking of no sun shining, THE DILEMMA is a bit darker than the preview lets on.  It's dark in a way that I like, and it played out in what could be a straight sequel to Vince Vaughn's previous film, the also dark relationship comedy THE BREAK UP (2006).
A struggling relationship is again the crux of the story, but this time it has been taken to the marital level.  Ronny Valentine (Vaughn) is very much in love with his girlfriend Beth (Jennifer Connelly).  They are great friends with Ronny's best bud, Nick Brannen (Kevin James) and his wife Geneva (Winona Ryder).  The beginning of the film finds them all out having a great time.  During a swapped partner dance, Geneva pressures Ronny a bit about proposing to Beth before she decides to move on.

Although there is no real pressure to pop the question, Ronny starts working on a proposal plan.  He visits the Botanical Gardens and while making his arrangements, he spots Geneva canoodling with some young buck, who we eventually learn is Rip, played by Channing Tatum.
Ronny's instinct is to tell Nick, but the opportunity doesn't arise right away.  He instead chooses to confront Beth, much to her surprise.
Beth quickly makes it clear that she is not going to let Ronny ruin her marriage and as expected, hijinxs ensue. 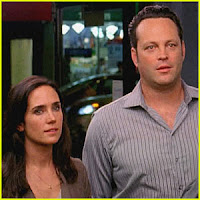 This movie hits its groove when the tension is highest, built up to staggering levels from the unsure and unsettling approach Ronny takes as he tries to do what he knows he should do, tell Nick.
All of this plays out as a huge business deal for Ronny and Nick is looming in the background.  They are partners in an engine design firm and have a prospective deal on the horizon with Chrysler, to be commissioned for designing a muscle car loud engine while integrating the set-up with a hybrid engine.  Nick has the brains behind the project, so matters are further complicated as his mental well-being needs to stay razor sharp and learning this life-changing news would clearly shatter him. 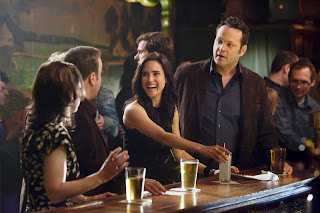 Queen Latifa has a great turn as Susan Warner, the project lead representing Chrysler in the deal.  Where the actual comedy may be lacking at some of points through the film, the Queen rocks her scenes and is a true gem in this stable of very able bodied comedic actors.
This is not a film in which the source of the comedy is apparent.  This film is dark and things barrel towards an uncomfortable ending that is not utterly surprising.  It is not a laugh at every turn romp, but in my opinion, the darker moments only serve to add to the film's overall enjoyment.  The humor comes springs from those feelings of dread and there is plenty to go around. 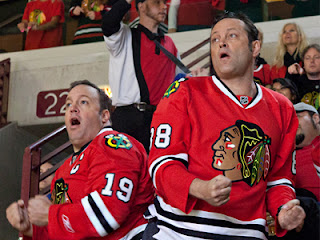 It is a serious film with a few laughs.  I guess my only complaint is that the film wasn't sure if it wanted to be a drama or a comedy and that diversity did not make the film stronger. Instead, this confusion of themes waters down ever so slightly the emotional impact the film ultimately delivers.
As I said above, I think this film was missing something that could have made it great.  I guess I just can't tell you what it is.  I liked this movie, but did not love it.  It falls comfortably in the 3.5 of 5 Horn range from the Reel Rhino.
I recommend seeing this film.  It would play just fine on the small screen as well, but you know me, I love the show that is the big screen.
As a side note, I caught THE GIRL WHO PLAYS WITH FIRE on Netflix Watch Instantly.  I must say it was wholly enjoyable and I think it was too harshly criticized when it played US theaters.  I think that THE GIRL WHO KICKED THE HORNET'S NEST will be great as well. 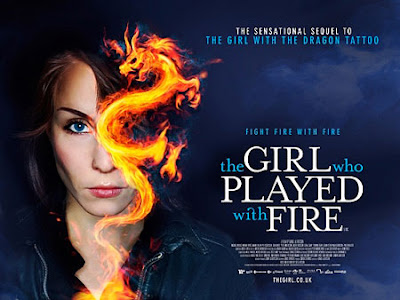 I have openly criticized the Americanization of the GIRL series and I say that the originals are as riveting and enjoyable as anyone could hope for.  Yes, you do have to read while watching as they are subtitled Swedish spoken language films.  That said, in my Top 10 of 2010 post, I mentioned Fincher as my #2 fav director of the moment.  Davind Fincher is currently filming the American version of The Girl With The Dragon Tattoo and I hope it is great.  I think this is a wonderful series (albeit very, very, very dark) and to have the chance to see it again, even if for the wrong reasons, will be okay with me.  Let's hope Fincher stays true to the very dark material, but given his work with SEVEN and ZODIAC I really am not worried.  Here is hoping that Rooney Mara can step into Noomi Rapace's huge shoes as she has been twisted and wonderful.  Mara's resume has some horror, but Americanized horror doesn't touch the depths needed for The Girl series.
As a final note, I saw the full trailer for HALL PASS, the upcoming offering from The Farrelly Brothers.  It looked funny and has a great cast.  Here is hoping for something more like THERE'S SOMETHING ABOUT MARY, DUMB AND DUMBER, or KINGPIN and less like HEARTBREAK KID or STUCK ON YOU.  Both of the latter weren't awful, but watching them, we knew that they weren't the Farrelly film vision that we had come to love.
I am out for now.  For this coming week's offering, I hope to catch THE WAY BACK and THE COMPANY MEN, with last on my list being NO STRINGS ATTACHED, the Ashton Kutcher and Natalie Portman romcom.  Portman seems to make it desirable to see but Kutcher cancels Portman and we are left with just a high chance for cheese.

Check out the trailer for Peter Weir's THE WAY BACK at the bottom of the page...
Till later, take care!
The Reel Rhino
Posted by: Ryan M. Rezzelle