(Reel Rhino Note: THIS IS THE FINAL CHAPTER OF A THREE PART RED STATE SERIES - Based on my recent trip to The Midland theater to see Director Kevin Smith's latest offering...Red State)﻿﻿﻿﻿﻿﻿﻿﻿

Physically and mentally tired.
Between the long posts and the raccoon incident of 2011 (see the top of my last post), I am tired.
Some might have you believe that the raccoon was the hand of God, sent to wreck havoc on my life.  You see, I...Reel Rhino...am hated by God.
Are you ready for it...GOD HATES @REELRHINO. 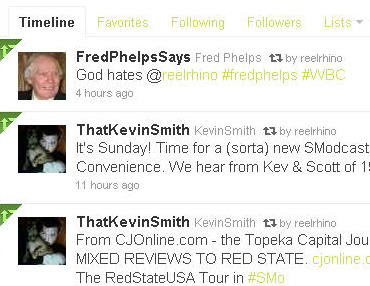 You may be asking yourself: "What could lil' ol' Rhino have done to incur the wrath of the Lord, as administered by such a high and holy one as Fred Phelps Sr., the high master of the oh so righteous Westboro Baptist Church?  What Rhino, what have you done? 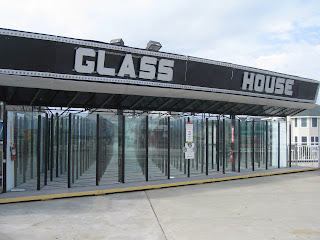 Well for starters, I am a sinner.  Yes, I can say it.  Hallelujah! Praise Him, Praise Jesus!  I am a sinner...forgive me oh Lord!

I do not live in a glass house.  A glass house such as that prominent home in Topeka, KS, that shelters those who know "right"...those who know right so strongly, that they feel it is their privilege to judge their fellow man and woman.
I know what I am and who I am.  I am so very proud of it.  The choices I have made in my life have brought me great joy and a beautiful family.  I admit my sins and I am happy with the life I live.
So what have I done to incur such wrath as the hatred of the loving God that I call mine?
This... 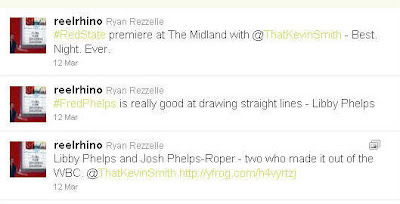 Fred Phelps is really good at drawing straight lines.  Not my words, but an echo of the estranged Granddaughter, Ms. Libby Phelps.  The Girl Who Lived...a survivor of the Westboro Baptist Church.  An escapee, broken free from bondage and escaped to the real world.

Was it hurtful of me to post these words?  Perhaps...and if I REALLY hurt someone, I am sorry.
This is what separates my way of being from the hideous face of the WBC.  I am willing to ask for forgiveness when I have done wrong.
And if we do classify this as name calling...then what are they doing?  The righteous find a way from being the pot or the kettle, yet they still call names of their own.  If God hates me...God must surely hate them as well...right?
They...they front nothing but hate in the name of the Lord, and while their words are hurtful to countless millions, they do nothing so ask for forgiveness, let alone change their ways.

I think that Kevin Smith's DOGMA is both a fitting transition and appropriate given that this event is all surrounding the release of Smith's RED STATE.

Devout Catholics may not like DOGMA for its approach at inspiring faith.  You see the message of Dogma is no secret.  It is overtly spoken by Rufus, the thirteenth apostle, as portrayed by Chris Rock.

Bethany (Linda Fiorentino): You're saying that having beliefs is a bad thing?
Rufus: I think it's better to have ideas. You can change an idea. Changing a belief is trickier.﻿
Ideas are influenced by our environment, by our conscious, by those in our lives, and by the outcomes of our actions from living those ideas.  Ideas are influenced as well by the Bible and in our individual beliefs in the words in whatever Bible you may call yours.
The WBC has beliefs so strong, that anything that isn't aligned with them, is the spawn of the devil.  Josh Phelps-Roper and Libby Phelps had ideas.  They saw the evil of their ways and changed their perspectives.
It was enlightening to hear the words of Josh and Libby.  It made sense of what seems to many to be senseless.  Their providing of a better understanding of the WBC didn't make the message of hate any more palatable, but maybe did give a better understanding.  Josh and Libby hurt others through the years and you know what...
I forgive them.
I understand that the Westboro Baptist Church preaches their hateful words because of a blind faith without an ounce of individual thought or an iota of an idea as to what they say, actually means.
﻿
﻿

"God Love Dead Soldiers"
"God Hates Fags"
"God Hates ReelRhino"
"Kevin Smith is a Gay Enabler"
"God Hates The University of Kansas"
"God Hates Rainbow Brite"
...what the hell?  It's feels wrong even typing and repeating these hateful phrases.
This is just crazy, which is why I am almost annoyed to be posting such serious fare in what is usually a lighthearted look at the movies.
I have a brother who fought for his country and sustained injury in his service.
I have gay friends who live proudly, who I know are hurt at the words of the WBC.  Even in their knowledge it is baseless hate speech, it still hurts.
Not an idea of worth from any of them, just echoes from a hateful old man.  Josh and Libby realized the truth...I wonder how many others of their numbers are on the fringe.
Here is what I say to the whole mess.
Live life as you want to live.  Fear not the hate of others, but bask in the love of those in your life.  The Reel Rhino loves you, even if God doesn't (and we know that isn't true).
The Supreme Court has ruled that the freedom of speech will stand, even in instances in which the words spoken freely, inflict real and true harm.  In my opinion, that is paramount to a physical assault.
Love defeats evil and hate any day.  I don't think that is cheese, I think it is truth.  It's unfortunate that our world that is full of people who love, accept, and encourage is marred by a few that propagate hate. 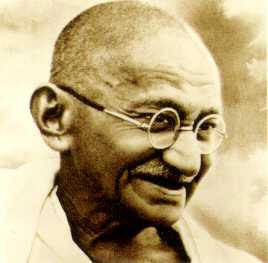 Was it Gandi who said that if we lived in a world of eye for an eye, it wouldn't be too long before we were all blind?  How do you respond to such hate?  I guess the best way is to ignore it.  To live freely and happily.  Show love and compassion to those in your sphere of influence.
Evil begets evil.  Love begets love.
God may hate Reel Rhino, but I still love God.  Respect those who CHOOSE to serve our country.  Respect those who are labeled as "different" than you, when in reality, they are the same.  Shed labels.  View people as people, not labels.  It is only by social agreements that labels are born.  We are all just people.
@ReelRhino hates hate....retweet that, Gramps.
Hiding behind the Bible doesn't make you right.
The end of days is not upon us.
Japan was not punished by God.
However a person lives their life, is the right way for that person to live their life.
Fred Phelps, Sr. draws great straight lines.
To all my readers, I am but a humble servant of my fellow man.  I mean it. 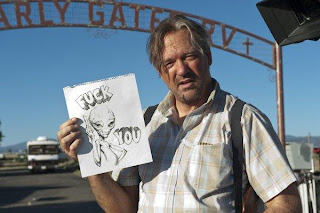 To finish, I offer you a fragment of a scene from this week's release, PAUL.  Near the end of the movie, an amazing feat of selflessness results in something amazing.  With all of the proof to contrary, and an alien standing directly in front of him, John Carroll Lynch's Moses Buggs, a fire and brimstone Christian declares:  A MIRACLE!  THE LORD WORKS IN WONDEROUS WAYS!
Sometimes there is no changing the beliefs of the devout.  People see what they want to see, even in the face of overwhelming evidence to the contrary.
Until next time, take care and enjoy this nugget from Charles Dickens's classic, A Christmas Carol..."God Bless Us Every One."  ...Or if God ain't your bag...enjoy this one, from that lyrical poet Ke$ha..."We are who we are."
Until next time...peace, love, and understanding my brothers and sisters.
Reel Rhino
(I will return soon with light-hearted movie reviews and all these stuff we love!)
Posted by: Ryan M. Rezzelle