﻿
So it has been a slow March for posts...for that, I apologize.  I guess my Academy Awards refraction was a bit more serious that I originally thought!
I will be posting soon in a lightning round for my last few flicks.  This list will include The Adjustment Bureau, Take Me Home Tonight, Drive Angry 3-D, Battle: Los Angeles, and Rango at the very least.
While a longer post will surely follow, in the meantime, let me offer a whole hearted recommendation for Battle: LA.  It was fantastic, for reasons I will post soon, but I didn't want to wait to offer my endorsement.  Critics be damned, the Reel Rhino has spoken.
Rnago will also be heaped praise, but another pre-show warning for all the parents who think this is a kids movie...it isn't.  The film is great, but not only does it have a variety of adult themes and scenes...it is a slow mover!  I could hear the kids getting restless and while the adults in the theater we laughing quite a bit, it was primarily the two fart jokes that got a rise from the kids.  I think it was a marked shortage of cute and lovable characters, which is rare for an animated film, but for my money, it hit the spot! 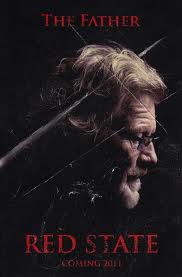 Also, tomorrow night (okay...tonight), I will be a fortunate Rhino indeed...I will be attending the Kansas City premiere at the historic MIDLAND THEATER of the travelling road show that is KEVIN SMITH'S RED STATE!  I am double pumped for this, and while it will set a new record for $ spent by me for a movie ticket, the Q&A that will follow will make things well worth the cost.  Toss in the fact that Megan Phelps will be a guest at the Q&A, makes it that much more sweet!
Who is Megan Phelps you ask...she is the daughter of Fred Phelps, the religious extremist on whom the sect leader in Red State was loosely based.
Who is Megan Phelps?  Here is a disgusting video "parody" she did for the Westboro Baptist Church's website (caution: disgusting and offensive content ahead):
Enough of this ridiculousness, let's get to something important...
KIMABLIANO was fantastic as our INDIEGIRL on the STREETS reporting in from Utah at the SUNDANCE FILM FESTIVAL this past January.  We talked about her contributing on a more regular basis, but alas, it has been almost two months, and no KIMBALIANO....
The wait is over...here is Kimbaliano's review of RED RIDING HOOD.  I had intended on including this in my soon to post cavalcade of flicks, but since she beat me to it...I yield the floor:
KIMBALIANO'S REVIEW

Mr Rhino, having been lucky enough to share my thoughts with you on a number of Sundance movies back in January, I have just seen a movie that I feel compelled to write to you about.  First, let me tell you that although I love my indie films, I can also appreciate a total fluff, pop culture driven, zero substance type movie as well.  Take the Twilight series, for example.  I'm a huge fan, and I'm okay with that.  And just because I've seen the last two Twilight movies at their midnight premieres, well, that doesn't mean my opinions on what makes good quality movie aren't valid.  Plus, I fully admit that the Twilight movies are terrible - but terrible in a good way, terrible in a way that makes them entertaining.  And nothing's more entertaining than the crowd at the midnight premiere of a Twilight movie, lemme tell ya. 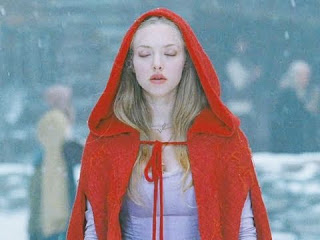 So, tonight I went into Little Red Riding Hood (directed by the original director of Twilight, Catherine Hardwicke and produced by Leonardo DiCaprio) hoping for another fluff, so bad it's good, movie.
Unfortunately, it stopped at just bad.  I mean, really bad.  So bad that people left the theatre - so bad that at one point I noticed an audible murmur and I'm certain it was everyone whispering to each other "man, this movie is not good".  The biggest problem, aside from the poor script and bad acting, are the complete disconnects in the film.  I mean, how do you explain a main character getting stabbed in the chest and collapsing in one scene, and then is totally fine five minutes later?  This happened TWICE, to two different characters, by the way.  And why does no one, in a town covered in snow, own warm clothes or wear gloves?  Oh right!  It's so the one guy who does wear gloves is probably the werewolf, since he's clearly covering up an injury dealt to the werewolf's paw in an earlier scene. 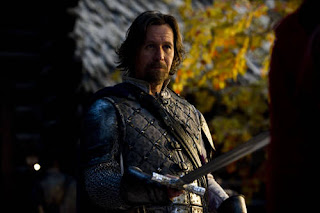 Seriously folks, this isn't even cheesy romance or cheap thriller good.  Maybe, if you've downed a couple of alcoholic beverages, and are with a couple of friends who have gathered only to mock aloud, would this movie have some redeeming qualities.  This may be harsh, but consider yourself warned.
KIMBALIANO. HAS. SPOKEN.

It's sad...I thought a hammed-up Gary Oldman could save any flick or at least make it watchable!  For me...I will see you soon in a post in the not so distant future.
RR
Posted by: Ryan M. Rezzelle