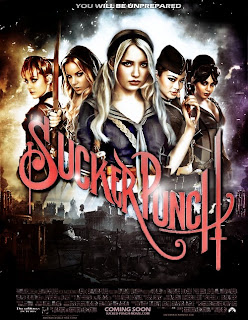 ~~~~~~~~~~~~~~~~~~~~~~~~~
REVIEWED THIS POST
Sucker Punch: 4 Horns
Limitless: 4 Horns
~~~~~~~~~~~~~~~~~~~~~~~~~
It was boys day out for Zach Snyder's latest offering in SUCKER PUNCH.  The plan was movie at the AMC Studio 30 IMAX and then off to Kansas City's famous OKLAHOMA JOE'S for a run at some BBQ!
Movies are great, no question whatsoever....but a movie and BBQ...that is a heavenly journey into this great world.
The day as a whole would be a total loss as a part of trying to eat anything remotely healthy....allow me to recap:
1. Steak and Shake
2. Popcorn (medium only!)
3. Burnt Ends Lunch Special at Okie Joe's
4. Ruby Tuesday's Salad Buffet...maybe this is the closest thing to healthy for the day, but believe me, it wasn't.
To make things a bit more interesting, the Reel Rhino had some fellow travellers for the day.  I am usually a solitary movie goer.  Usually, it is in fear that I may have a man-o-pause moment, and be struck so tenderly by some aspect of a movie, that I break down in tears.  No such fears with SUCKER PUNCH, though, although standard seat-between seating would be employed.
My peeps Jason, Ross, and Dustin decided that for all my talk, they had to know what it was like to actually see a flick with me.
I think they got a bit of my sense as a forgiving film goer, as the ratings for Sucker Punch played out like this...
Reel Rhino: 4 of 5 Horns
Dustin: 3
Ross: 3
Jason 1
All three of my compatriots gave their points for one reason alone...the girls of Sucker Punch certainly are snappy dressers. (Read: Sexy Schoolgirl Uniforms are still "in.") 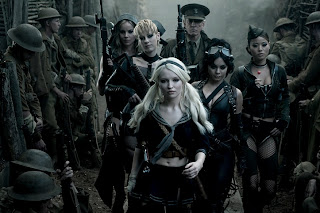 I too loved this aspect, but of the four of us, I am the only one who enjoyed Zach Snyder's actual product, as opposed the other part of the "show."
I love Zach Snyder's visual style and the tone of his films.  By a mile, you can call me a Watchmen apologist, because I love that movie, giant blue penis and all.  I think that Snyder gave us the best possible Watchmen we could get, and while there are flaws, he shot for the moon and in my humble opinion, hit it!

Snyder gave us visionary looks into the world of Frank Miller's 300, George Romero's Dawn of the Dead, and most recently, the animated feature, Legend of the Guardians: The Owls of Ga'Hoole.  I haven't seen Legend of the Guardians.  I remember getting sick of seeing the trailer so many times in the theater.  I haven't seen it yet, but I will soon.
Here is my plea for your forgiveness of Sucker Punch.  Yes. This movie is a 15 year old boy's wet dream.  This movie is a video gamer's paradise.  This movie throws everything at you and more.  The story is sometimes hard to follow and when it is all said and done, there will probably be some story points you on which you are unclear.
BUT... 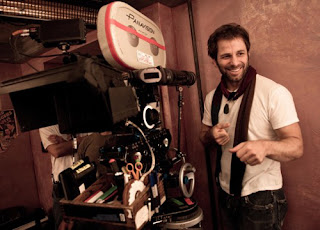 How absolutely original is this film?  Zach Snyder both wrote the screenplay and has story by credit.  This is his baby.  It is ORIGINAL MATERIAL and this is something that we need more of in this same old story film world.
But wait Reel Rhino, some of those visuals were kind of rehashed from other material, weren't they?  Were those Orcs?  Dragons? Nazi Zombies?  Yes, they were!  But the sum total of the visuals in this film and the original nature by which they were all presented make this film as a whole, something wonderful. (P.S. For another great trip into the world of Nazi Zombies, See Also: DEAD SNOW).
I am not a fanboy, but I know what I like.  This film is no Star Wars.  It is no Lord of the Rings.  It is no Indiana Jones.  But it is a film that is yet another early entry into the career of a filmmaker who shows signs of the greatness that the likes of the creators of those older great series.
The visuals in this film are fantastic.  I am so happy he decided on IMAX but passed on 3-D.  This film was dark and with 3-D, things almost get too dark.  The tone was perfect, the subdued colors sublime.
I know what I am...I say it all the time.  I am an easy to please moviegoer.  You know who that works out well for?  Me.
Let's touch on the movie for a moment... 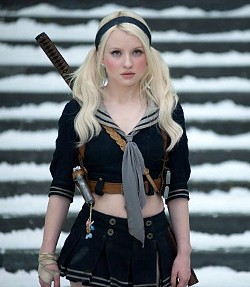 Emily Browning is Baby Doll, and boy is she ever.  I don't mean that in too much of a sexist way, but she really is a cutie.  Baby Doll's mother dies and in the first few minutes of the film, her step-father attacks and kills her sister, and the blame is put on her.
She is sent to a home for the mentally ill...Lennox House, where she meets her soon to be gang of merry misfits...
Abbie Cornish ... Sweet Pea
Jena Malone ... Rocket
Vanessa Hudgens ... Blondie
Jamie Chung ... Amber
The are corralled by Dr. Vera Gorski, who is played with an odd Eastern European accent, by Carla Gugino.  I like Carla Gugino.  She is a beautiful woman who takes on very risky and adventurous roles and will always exist in some capacity as Ingrid Cortez, that hot mama super hero from the Spy Kids franchise.  For my money, I loved her short lived sci-fi series, Threshold.
When Baby Doll arrives at the home, within a very short while, the movie becomes a fantasy world film, set within the mind of one of our characters.  This film exists in a not-as-smooth-as-Inception dream within a dream within a dream kind of deal.
The home is set up as an escort house of sorts where the girls dance for clients and make money for their boss, Blue, who is the primary baddie in the film.  Blue is played well by Oscar Isaac who had also done well last year as Prince John in Ridley Scott's ROBIN HOOD. 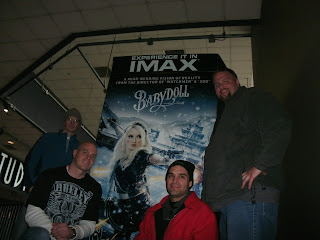 There is a trigger that sets in motion the bad ass action sequences you saw in the trailers and which drew you into the theater.  There are several mind-blowing scenarios that push into the realm of video-game style action....yes, placating the 14 and 15 year old boys everywhere, by scantily dressing hot young 20-somethings and having them absolutely kick ass!
Jon Hamm has a cameo in a key role to the film but by far, the best thing not in fishnet stockings or school girl skirts was Scott Glenn, credited as only "Wise Man."
He spouts wisdom like ice cream at a soda shop, and while he appears as something of a cliched character, I loved him.  Generally speaking, I love Glenn's body of work and it was great to see him having fun with this role...hey...if you don't stand for something, you'll fall for anything!
I loved what was great about this movie, but I will also be the first admit, where it fires mostly with a bang, I felt it ended with a fizzle, primarily due to a rather unclear resolution. 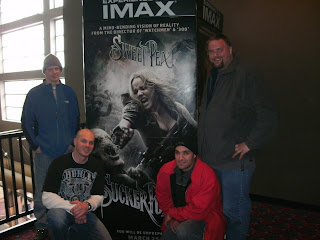 I forgive the end for what came before it.  Zack Snyder may not have the Spielberg or Lucus or Jackson touch just yet...but he is working on it.  Keep it coming...keep it coming.
As I have said in the past with dick and fart jokes, there is a place for everything in this cinematic world...even wet-dream teenage boy fantasies projected live and in living color.  Zack Snyder delivers a fine effort here and I hope that his writing evolves into a complete package.  For now, I will survive on his stellar chops in the action and effects department with the ballet he has given us here as evidence of his career promise.
You know what he has lined up next, right?  SUPERMAN: MAN OF STEEL...directed by Snyder, produced by Christopher Nolan.  The thought gives me chills, and while I was one of the few who enjoyed Superman Returns and forgave Brandon Routh's wooden turn as Clark Kent as homage to Christopher Reeve, I am super duper excited for this. 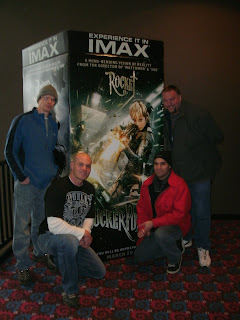 Zack Snyder had directed commercials, some music videos, and while he has a way to go, I think he could thrive as a protege to Chris Nolan.
Hey, Nolan is my favorite director of the moment and while I say that he is great, his filmography isn't that deep and he isn't that old!  I love that these young bucks are tearing is up and I see them as a new revolution in fantasy, saga-rich film making.  I'm not talking Dungeons and Dragons kind of stuff...even though there was some of that in Sucker Punch, but I mean a George Lucas/Steven Spielberg kind of renaissance....those guys and the likes of D.J. Caruso and JJ Abrams are some of the best we have for making our dreams come true.
You know I'd like to rope Michael Bay in there too...but even I, a proclaimed Bay apologist admits that he is own animal.
We had some fun after the flick, roping a young lady on AMC's staff in to taking some shots of us having fun with the Sucker Punch lobby stand-up.  At one point, she said...this is kind of creepy.  Yes it was young lady....yes it was.... 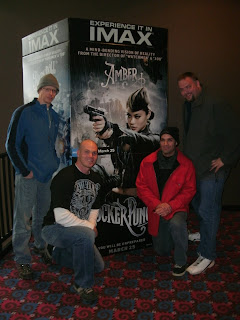 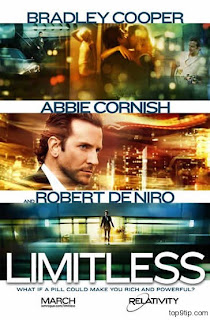 It also took me a week to see last week's #1: LIMITLESS, the Bradley Cooper vehicle.  Sucker Punch's own Sweet Pea, Ms. Abbie Cornish was here as well, along with a rather subdued Robert DeNiro.
Limitless was a fun Sci-Fi/Action/Thriller and while a bit in unpolished in some areas, I feel it held up from start to finish.
Bradley Cooper can act, but I haven't ever doubted that, but apparently he needed to convince the world.  He has been great in all the jerky but lovable  roles (see also: The Hangover, The Wedding Crashers) so why wouldn't he be good in this.  Hey, I even found ALL ABOUT STEVE remotely entertaining with a rather touching ending.
Limitless gets 4 of 5 Horns as well.
Two 4-fers in one weekend, that ain't bad!
Till next time...
RR is X'ing Outta Here! 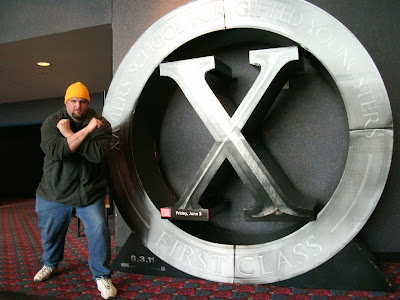