Crazy, Stupid, Love. I guess by the book, this is just another ensemble rom-com, but who wrote that book anyway!
I ventured out this evening for a double-duty date night...my wife and I were celebrating both our 6th anniversary and her 33rd birthday. She's not yet old enough that she can get mad at me for saying her age, but maybe the next few years we will still be celebrating her 33rd as well. We'll see what she thinks after reading this. 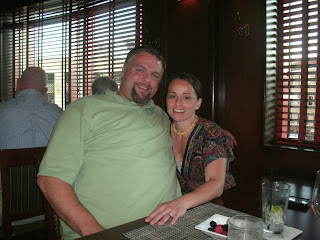 We had a great dinner at McCormick and Schmick's…a great bit of fine dining at really decent prices. Tracie, as it so happens, worked for Andrew McCormick, the younger McCormick in the namesake lineage to that restaurant empire. City Tavern was the bar and San Francisco was the city. That was, of course, before I rescued her and brought her to the great metropolitan area of Kansas City. Maybe that last part is debatable within the household, but hey, I think it’s pretty great here, minus the ridiculous heat.
This was the second year in a row we made dinner and movie of her birthday. Hey, I won't ever fight it, you know me. This is also the second year in a row we made our choice in flick a Julianne Moore film, with last year's being The Kids Are Alright. And even more suspect, this is the second year in a row that we caught a Julianne Moore film in which the major conflict is kicked into play when Julianne Moore's character is unfaithful to her partner.

Crazy, Stupid, Love. begins with an introduction to a long married couple, Steve Carell’s Cal and Moore's Emily. We learn through the film that they have been married for many years, in fact going back to age 15, this pair seemingly linked for life. Soulmate is a term thrown around quite loosely in this one…not since Buying the Cow has it been as such…which, by the way, is a much more fun film than you would ever guess…Ryan Reynolds resembling the Berg that made him so loveable on that old Two Guys a Girl and a Pizza Place…also a great series…but lest I digress. 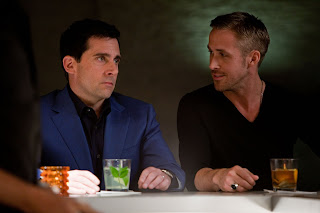 In the early moments of the film, Emily declares that she wants a divorce and soon after, that she has been unfaithful with a co-worker.
Cal sets out at first to drink and sulk his misery in the open court of a local bar. When a local has grown tired of hearing cry into his vodka-cranberries, that local beckons him to his table and offers to help him reform himself to something resembling a desirable mate.
Said barfly is none other than Ryan Gosling's Jacob. Gosling is quite elusive as an actor. He is acclaimed in most everything that he appears, and according to my wife, he is also strikingly handsome. That's okay, I think Emma Stone is quite adorable my darn self. Ralph Garman and I can duke it out over her, if it comes down to it. (See also, SIR’s Hollywood Babble On) 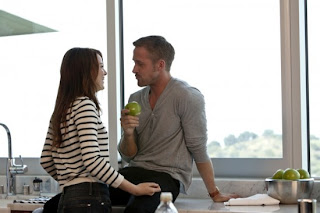 Gosling makes it his mission to hip-ify Cal and he is quite successful in his mission.
The Cal tale is but one of three story arcs that intertwine. You have Cal and his post-divorce misery. You have Jacob and his man-whoring, a practice that comes to a screeching halt when he falls head over heels for one Emma Stone, playing a young lawyer come lately named Hannah. And finally, you have young Robbie (Jonah Bobo), the 13 year son to Cal and Emily. Young Robbie is in love you see, with the family babysitter, Jessica (Analeigh Tipton). 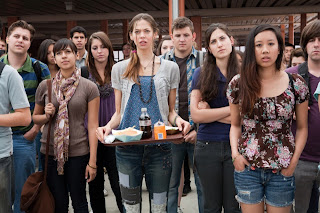 Oh how crazy and stupid love can be...hey, that would be a great name for a movie.
So the first hour of this flick was slower than I would have liked. That said, it was still enjoyable, but just slow. The last half was redemption for this slow burn. This was a romantic comedy, of the darker variety, but there were some fantastic laugh out loud moments in that back half of the film. One sequence in particular literally had us laughing to tears.
This particular sequence kicks off the third act and it was actually quite cliché, but that is what made it so wonderful. It wasn't a single cliché, in fact, it was about ten clichés in a matter of minutes. One alone would have been predictable, but this scene in particular was a series of so many predictable possibilities, it was truly and literally hilarious. 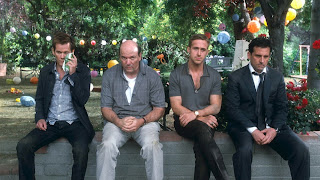 This film is darker than your average rom-com and if not for the stellar cast, it may have had too depressing of overtones. That cast also included Marisa Tomei, John Carroll Lynch, Josh Groban, and Kevin Bacon. Bacon plays David Lindhagen, the antagonist of sorts, who is the co-worker with who Emily shared her marital indiscretion. Bacon has played foil in Super, X-Men: First Class, and now this, and he has been lined up as the baddie in the big screen adaptation of the genre comic R.I.P.D. 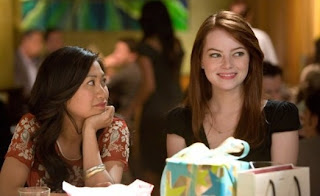 We may hear the words David Lindhagen uttered on screen by Carell more than any other combination of words in the film. Carell is born into a man obsessed and really, he and his son embody some of the obsessive behaviors that are born of a broken heart. Hey, I let my lady get away from me once. Is it obsessive to burn 40 mix-CD's and mail them to her...that was her birthday in 2002. Fortunately for me, things turned around and in addition to celebrating this birthday, as I said, it was our anniversary as well.
From the get-go, I was feeling this flick out as a 3 horn go, but as that second half unfolded, it became entrenched as a very solid 4 of 5 horn effort. Great work to co-directors Glenn Ficarra and John Requa and a really fun story written by Dan Fogelman.
Thanks for a fun night gang and Happy Birthday/Happy Anniverasry deah.
Love.
Reel Rhino
Posted by: Ryan M. Rezzelle