Arthur Christmas and the Weak 2 Weeks in Cinema 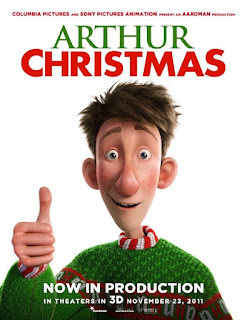 I have been promising this Arthur Christmas review to people for the better part of this week.  I am currently under the weather, coming out of a week of teaching photography, and headed into the weekend needing a pick me up, that just isn't there.
What in the holy hell has been going on at the movies?!?
Last week, no new releases, this week, just The Sitter and the star-studded but likely garbage-rific New Year's Eve.  So at this very moment, The Sitter is at 17% on Rotten Tomatoes and New Year's Eve is at a (just like I expected) 5%...garb-oni!
What a miserable 2 weeks at the theater...gimme gimme Ticker Tailor Soldier Spy...opening this week as well, but only on a miserable 4 screens.  Thanks a lot, New York and LA!
I understand the appeal of the masses for the Twilight flicks, but that doesn't mean I have to like it.  But for the love of Pete...we have set up Twilight to rock a FOURTH #1 week at the movies.  That is unless the milquetoast New Year's Ever manages to take the weekend.
For my money, as I have said before, the best options out there in wide release are still The Muppets (97% on RT) or Hugo (94% on RT), but also perhaps today's offering (sitting at 94% on RT)... 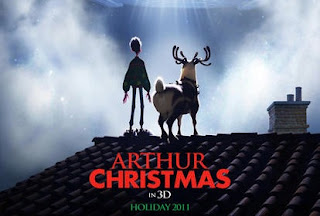 ARTHUR CHRISTMAS: 4.5 of 5 Horns
I saw Arthur Christmas last Saturday.  This capped a great run at the movies, which including those above along with My Week With Marilyn, was pretty fantastic.  That said, you can understand why I am so sick of these lame weeks of nothing new worth watching.
I went into Arthur Christmas having seen only one teaser trailer
The truth of the matter is that I probably wouldn't have gone and seen this flick, if I hadn't exhausted all other options...except Jack and Jill, which I flat out refused to go see.  I have stuck by Adam Sandler through thick and thin, but with the atrocity that is Jack and Jill, I am hanging him out to dry. 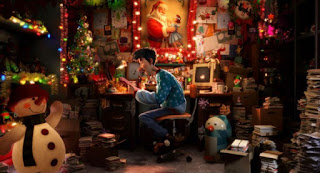 Arthur Christmas is a wholly British film.  Eva Longoria, Laura Linney, and Joan Cusack are the only touch of Americana, with the real charge being lead by some of my favorites: Jim Broadbent (Santa), James McAvoy (Arthur), Hugh Laurie (Steve - Arthur's Brother and the heir apparent to the job of Santa), and Bill Nighy (Grand Santa) as the core four leads.
From IMDB: On Christmas night at the North Pole, Santa's youngest son looks to use his father's high-tech operation for an urgent mission.
An urgent mission...what could it be?  True love?  Save the world?  Nope...a kid's been missed!  Young Arthur Christmas is sent into a tailspin while the rest of the Santa family is seemingly unaware or not concerned.
Yikes... 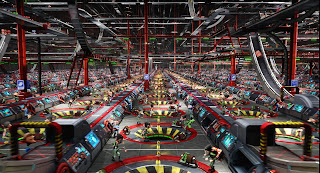 What really grabbed me with this flick was the absolutely stellar presentation of Santa's delivery.  Such a high tech effort, as is briefly evidenced in the first trailer, presented above.  It was an awesome display of tech and the animation was spot on wonderful.  Yes, I saw this in 3-D, which was certainly passable, but this was a wonderful film, no matter how many D's you see.
This film delivered great laughs, for the adults as well as the kids.  But unlike the obviousness of the Shrek in-jokes for adults, this film's jokes were absolutely hilarious.  Guffaws were heard throughout the land, soda spewing from many a parent's nose. 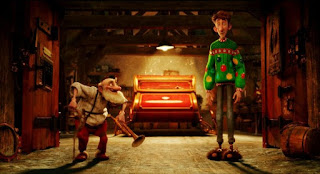 Give this one a chance.  The kids will love it...the adults will love it.  It was a damn fine entry into the films of Christmas.  Nothing like cursing when talking about the great gifts the holiday season brings us.
As a side note, I am a big fan of Pawn Stars, Auction Hunters, Hardcore Pawn, American Pickers, and perhaps most of all, Storage Wars.  I am happy a double dose of Storage Wars, with the addition of Storage Wars: Texas, but I am a little on the fence about these new characters.  They seems to have selected carbon copies of the type of people we are already dealing with on the original.  I will watch though, because I am an addict like that. 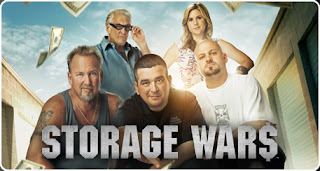 As a second side note, when my in-laws were in town, I was flipping through the DVR and my father-in-law caught a glimpse of Hardcore Pawn in my saved episodes list, and quickly looked away from the TV, saying: Oh, um, oh, we probably don't want to watch that....
Good times.
Until later, take care...
Reel Rhino
Posted by: Ryan M. Rezzelle