The Girl With The Dragon Tattoo (Take 2)

I loved the Millenium Trilogy, as it was delivered in its original Swedish version.  Sweden being the country to which author Stieg Larsson called home until his death in 2004.  Talk about missing out on the party, in 2008, Lasson was the second best selling author in the World, currently having sold over 53 million copies Worldwide, since this series was first published.
Larrson is an amazing storyteller and when I saw a picture of him, I was shocked as to how much he looked like another storyteller, who also recently passed (in 2009), in John Hughes, the master of teen angst and easily understandable stories of real people, real problems, real emotions.  I only bring it up to fuel speculation that they were in fact the same person????  You decide: 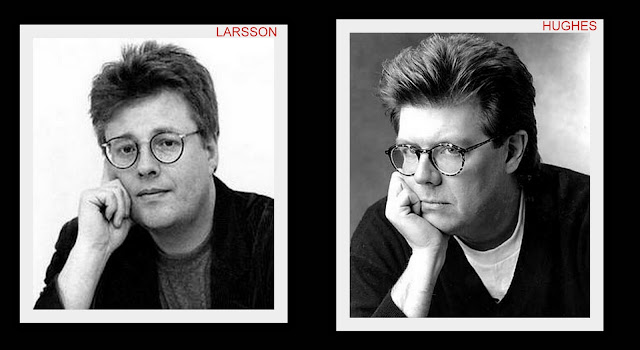 At the very least, they had the same hairdresser, photographer, and optometrist, that much cannot be denied.
The books, I am told, are fantastic and there is no way that any film could fully represent Larsson's vision, given the length and breadth of detail, to which he wrote. The Swedish trilogy of films, The Girl With The Dragon Tattoo; Played With Fire; and Kicked the Hornet's Nest, all captivated movie goers, those who were willing to endure the subtitles, as these were Swedish spoken language films, populated with (mostly) Swedish actors.
Americans are ethnocentric....terribly.  Yep, I yanked that word straight out of my eighth grade civics course...it means that we believe that we are the most important culture in the world and whatever doesn't fit our paradigm of entertaining, must be conformed to properly entertain us, the way that we like to be entertained.
To that, I say hell no!
I loved the SWEDISH version of all three of these films and they could have entirely stood as the filmic entries in this series.
I think Noomi Rapace was a force and she carried these films, shouldering a burden that was happily split with Michael Nyqvist, the original Mikael Blomkvist.  These two and the rest of the cast, crew, writers, and directors, crafted together 428 minutes of pure thriller/drama/mystery bliss. 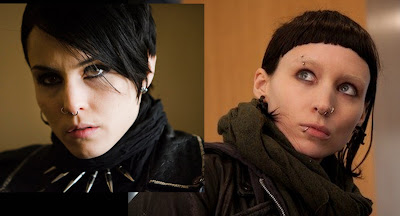 So there you have it, I loved the original...BUT...
I have a director "crush" on David Fincher.  I can't help but be forgiving for this unnecessary Americanized remake, because it was helmed by Fincher.  The original trilogy never NEEDED to be remade; but we are better as film goers for having the David Fincher version in our lives. 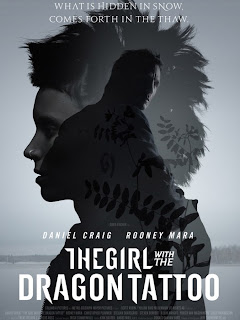 THE GIRLWITH THE DRAGON TATTOO (2011)
FROM IMDB: "Journalist Mikael Blomkvist is aided in his search for a woman who has been missing for forty years by Lisbeth Salander, a young computer hacker."
Noomi Rapace was spectacular and it isn't fair to compare Rooney Mara's Lizbeth Salander to Rapace.  But for the amazing presence that Rapace provided, Mara's Salander held her own in comparison.  For being a New York born gal, playing a troubled Swedish computer hacker, she does a damn fine job.
Fincher directs DARK like a champ and this film is no different.  Danial Craig as Blomkvist is a fitting tribute to the original, as are Christopher Plummer as Henrik, the patriarch of the Vanger family and Stellan Skargard, his affiable brother, Martin.
Robin Wright rounds out the cast of familiar faces, playing Erika Berger,co-editor of Millenium magazine and part-time lover of our hero, Blomkvist.  She is an American, through-and-through, but she pulls off her accent without notice.
From there, this film is populated by actors who will be mostly unknown to American audiences.  You see, this is also the point of my surprise...
I hadn't followed the Americanization of this film very closely, but given the remake so closely followed the original Swedish film, I assumed that there would be significant changes, perhaps even a change in venue to an upscale neighborhood somewhere stateside.  No such changes were enacted and in truth, this version is nearly a shot for shot remake of the original.  I haven't looked, but I wouldn't be surprised that many of the original actors are in this version as well. I need to look and see how many of the same sets were used. Visually speaking, there was little to distinguish the original from this current version. 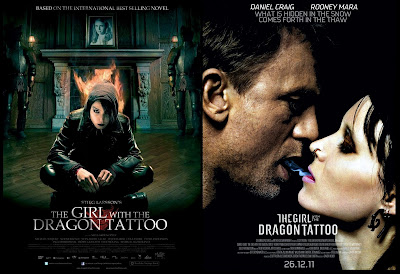 Fincher is so talented, though, this film is 100% as enjoyable as the original.  Definitely see this movie. Don't watch the original unless you want to have the American version COMPLETELY spoiled for you.  Put it on your 2012 to-do, to check out the original, for it is worth seeing how well non-Hollywood pictures can be made, minus the BIG budgets and major hoopla.
These books are a trilogy and one must figure, that in the next few years, Fincher will move forward with making this his own namesake film trilogy.  But if you can't wait, you are in luck.  As a consumer of popular media, I recommend whole-hearted either the books or the original films,to see how this story plays out. 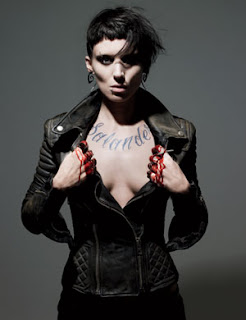 I have seen all of the originals and knowing how it wrapped up didn't change my enjoyment in the least.  The biggest diverging plot points came in the end, but it really wasn't a significant change, at least worth noting.
See this movie.  It is dark, graphic, and just very well made, as dark and graphic are two facets of film that Fincher does ridiculously well.
4.5 of 5 HORNS for The Girl With The Dragon Tattoo
I hope to get out and see We Bought a Zoo, The Adventures of Tintin, and most of all, I can't wait to see The Darkest Hour.  I very much hope this is a well made bit of science fiction fun .  If nothing else, it looks fairly original and quite unique.
Until later, take care...and just in case we don't speak again for a few days...Happy Holidays, Merry Christmas, Happy Hanukkah, Happy Kwanzaa, etc...and God Bless Us Every One...thanks Tiny Tim...no, no...Thank You Chuck Norris.
Reel Rhino
Posted by: Ryan M. Rezzelle