It's The Most Wonderful Time Of The Year...For Movies

I am the victim of my own good fortune.  While I encountered a rather dry first few weeks of December, the last few days have been rich in movie going.  Three movies in three days.  I am short on time prepping for the holidays, so I am going to limit my words on Young Adult and Sherlock Holmes: Book of Shadows, and go a little heavier on Mission: Impossible: Ghost Protocol. 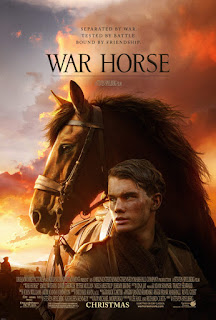 The Reel Rhino is always looking for red hot leads...I have the good fortune of being friends with a fellow who had the good fortune of nabbing some free preview tickets to WAR HORSE, the latest epic from his majesty, Steven Spielberg.  I am 100% a fan of Spielberg and in my book, even when he's off, he's on.
Now my friend, in all his goodness, has yielded to his better half to be the latest guest contributor to the Reel Rhino family.    Ladies and gents, I give you....The Artist (forgive me Mrs. K, but that's the best I could do...correct me if you have a better choice of pen name.)
War Horse
FROM IMDB: "Young Albert enlists to service in WWI after his beloved horse, Joey, is sold to the cavalry. Albert's hopeful journey takes him out of England and across Europe as the war rages on."
I would like to see the statistics on how many books such as War Horse have enjoyed the privilege of being popular fiction, a broadway play, and now a major motion picture.  Now there's no guarantee that the Spielberg's adaptation of Morpurgo's book will be a hit with the public, but this movie is already generating some Oscar buzz.  I'll say this right off, this movie is not in the same category as Schindler's List and Saving Private Ryan, but it is worth a look.  Earlier this month, I won FREE passes to see War Horse before the general public from www.paperbackswap.com  If you don't know about this website, I have to give a shout out to them for fully embracing the power of the internet while simultaneously providing a way for people to enjoy books "in the flesh", so to speak. It's better than a library and cheaper than a book store, but I digress...
War Horse is a beautifully shot picture with that epic feel that has become classic Spielberg.  I might even rank it with E.T., because it's the non-human that steals the show.  I don't think it has the freshness and originality of E.T. but it's heart and soul are in the right place.  In fact, I dare you to leave the movie theatre with a dry eye.  My favorite scene from this movie was when Joey (the horse) gets into situation that for just one moment, inspires action action in the soldiers that transcends sides of battle and demonstrates the humanity that regardless of reason, exists in all men and women that fight for God and country.  The scenes that feature Joey on the field of battle are both astoundingly heart wrenching and surprisingly and appropriately gut busting funny.
Thank you, Mr. Spielberg, for capturing all the emotions of these moment and giving texture and dimension to a fictional story that for a moment feels real and that's real good stuff. 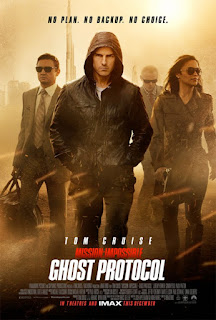 Mission: Impossible: Ghost Protocol: The IMAX Experience
How long has it been since you've seen that many colons in a single title?  Impressive, I know.
But impressive is just about the perfect word used to describe this film, this extremely impressive first live action effort from PIXAR wunderkind Brad Bird.  He made his bones in the action genre with The Incredibles, but the question was, could he do it without the support of the great animators and collaborative effort that makes every Pixar film shine so bright.
The answer is yes.
FROM IMDB: "The IMF is shut down when it's implicated in the bombing of the Kremlin, causing Ethan Hunt and his new team to go rogue to clear their organization's name."
I'm over being over Tom Cruise.  Yes, he has a history of being a bit bizarre.  No, I don't understand Scientology.  But hey, people forgive celebrities who behave far more badly, and I for one, am done.  Tom, I give you a hearty round of applause, for reascending to the ranks of proper action star.
I think that it was as important to have the Bad Robot (JJ Abrams) team on-board as producer of this flick, as evidenced by JJ's recent successes, this film falling safely in line with his level of quality.
The rest of Hunt's team, played by Simon Pegg, Paula Patton, and the man of the hour, Jeremy Renner.  They play off each other well, in a comedic sense, as well as running missions like well oiled heists, making the impossible possible.
That is a part of the allure of the film...much like John McLane is seemingly the indestructible hero, Ethan Hunt closely follows suit.  There are some sequences in this movie that would have killed most people, but Hunt is the Energizer Bunny of movie heroes of late.
The action sequences really pop and to be honest, since Warrior in September, this was the most fun I've had in the theater.  And what a joy to see some good old fashion US/Russia hostility captured sublimely on the big screen.
I am all for world peace, but in the movies, if it bleeds, it leads.  Nicely done folks.
4.5 of 5 Horns 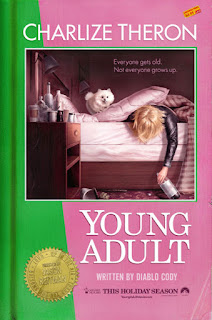 Young Adult
FROM IMDB: "Soon after her divorce, a fiction writer returns to her home in small-town Minnesota, looking to rekindle a romance with her ex-boyfriend, who is now married with kids."
Jason Reitman is quickly becoming one of my favorite directors.  I will admit, I am favorable to him in part because I owe his father a great deal for creating my favorite movie of all time... Ghostbusters, that is.
The younger Reitman has mastered in short order the ability to convey massive amounts of emotion in sharing the misery of regular people.  Most notably, I am thinking of Juno, Up In The Air, and now in Young Adult, starring Charlize Theron, Patton Oswalt, Patrick Wilson, and Elizabeth Reaser.
I went into this flick a little weary.  I loved Juno, and so did the Academy, as it won the best original screenplay Oscar for then first time screenwriter, Diablo Cody.  Ms. Cody came back firing, but sadly she missed the mark badly with Jennifer's Body.  Maybe it was her push for the silly teen lingo that worked so well in Juno, or maybe it was the trainwreck that is Megan Fox; whatever the problem, Jennifer's Body was God awful.
The trendy speech was left in the dust, and Cody strikes again here, with a real winner.  But this is a starkly dark film.  Where Juno was dark in its way, it was still bearable even at its roughest moments.  Young Adult raises the bar of depravity to new levels, and while it is evident in the trailer, this film really isn't even a dark comedy, but a tragedy.
Theron's Mavis Gary, pining over the high school and college sweetheart of days past, he, Patrick Wilson, here as Buddy Slade, now married with a new baby in his life.
This film is entirely a dissection of the deconstruction of a mentally ill person.  Sad, tragic, a train rumbling consistently from start to finish, until it finally leaves the tracks.
Patton Oswalt is a tour de force in this film, and if he is not nominated for an Oscar, I will be surprised.  His character's story is unreal and how he develops as the plot unfolds is masterful.  His comedic delivery is in stark contrast with his tragic past, but he makes it work, 100%.
I give Young Adult a very sold 4 of 5 Horns.  Check it out, if you dare. 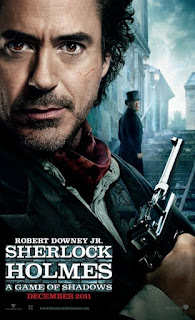 Sherlock Holmes: A Game of Shadows
FROM IMDB: "Sherlock Holmes and his sidekick Dr. Watson join forces to outwit and bring down their fiercest adversary, Professor Moriarty."
A word briefly on this latest Sherlock Holmes adventure.  I am nearing the end of my evening and I will keep this short and sweet...
First, a big shout out to my buddy Matt.  We had a man-date to give closure to a deal struck months ago, that involved a Ghostbusters movie poster, and a movie night, my treat.  Matt, you da man!!
Second, I really enjoyed this movie.  I didn't walk out of the theater blown away, but I enjoyed (most) every minute of this film.  I say most every minute because my only complaint with this effort, is the same as it was with the first...it was just a hair too long.  These stories are so complex, that the 2 hour + running time gives you so much to follow and try and track, never knowing what elements of a set or the story are going to come back around later.  That said, I still really liked it!
I thoroughly enjoy Jared Harris, the face to Holmes Dr. Moriarty.  He is a formidable villain, and certainly does not let us down.


Props to Mr. AK-47 for pointing out to me, I forgot to assign the traditional horn rating...for Sherlock & Co., I give it a 4 of 5 Horn salute.
The highlight by far, though was a marriage proposal, via special presentation, after the show.  This guy put together a series of movie clips that told their story...on an average Monday night, which also happens to be their Movie Date Night, he made arrangements with the man, Ponce, AMC Barrywoods GM extraordinaire, to make this night a little extra special.  She said yes.  Congratulations to the happy couple.
The holidays are upon us, and I can't say when I'll post again.  I will try to hit a few flicks and post when I can.  You can rest assured, I will be coming strong on or around the new year with my best and worst lists, of 2011.
Until later, take care.
Reel Rhino
Posted by: Ryan M. Rezzelle