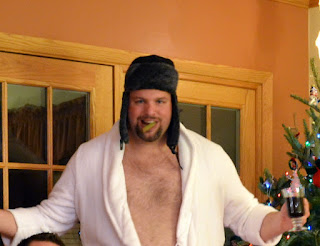 Happy New Year's, Reel Rhino fans!
I am pleased to see we have all made it to 2012, which according to the Mayans (and to Roland Emmerich) this may be it for us, so thank God we will at least be getting 2012 releases of The Avengers and of course the final flick in the Twi-Hard series...we can all die happy, men and women alike!
I spent the last few days of the old year, nursing my big left toe, to which I had some holes drilled in the joint to try and stimulate some scar tissue to sub in for cartilage that I have long since compressed due to a combination of super human size and super flat feet.  I also had a bone spur shaved off that was beginning to resemble a 6th toe. 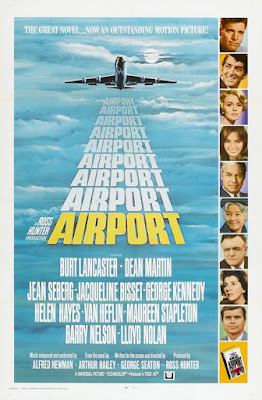 To help cushion the blow of the time off my feet, I ended up running a huge marathon of 70's disaster flicks (ala Netflix Watch Instantly), the grandfather films to the likes of the Emmerich and Michael Bay offerings of the 90's and 2000's.  If nothing else, they brought back a lot of great memories of Sunday afternoon movies with my Dad, watching them on TV (when the Steelers weren't playing, that is).
The full line-up I caught (so far) includes the following:
Airport
Airport 1975
Airport '77
Earthquake
The Towering Inferno
Disaster of the Coastliner
This was quite a run and it is shocking to see how compelling these films are even after so long and having been made with creativity as the primary special effect!  Earthquake literally leveled LA and they did so in a convincing manner with the use of some beautiful matte paintings as back drops.
A side note on George Kennedy...that guy was the pimp of pimps in these flicks.  He was a legit star in the 70's and he added great flavor to these movies, swinging into the straight man comedy role well in the Police Squad/Naked Gun flicks in the 80's.
Believe it or not, I have also had the chance to see some theater flicks as well.  I'm like the mailman, baby, nothing will keep me from delivering the goods! 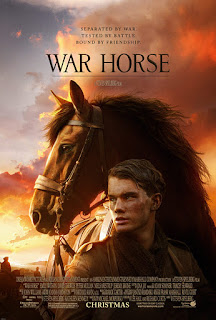 I saw War Horse two days ago, but given that I gave you my friend's review previously, I won't get into it too much, other than to say that I liked it, but didn't love it.  I thought the build up was too long and scattered, but even so, the pay off was decent enough.  There was a superb 30 minute stretch towards the end that send me headed for my Kleenex more than once, delivering several moments in what could be argued were heavy-handed dramatic moments.  Spielberg makes beautiful movies...there is no argument there.  Sadly, I saw it at a terribly projected film theater (Dickinson Northglen) and the projection of the film killed some the enjoyment of Spielberg's epic scenes.  I liked it enough to give it a 3.5 Horn rating and I will look forward to seeing it in HD when it is released, to see if that helps at all with my enjoyment.  Sir Steven lives in an epic world, but I think a 30 minute shorter flick would have enhanced War Horse by giving it a cleaner run through without some of the fluff. 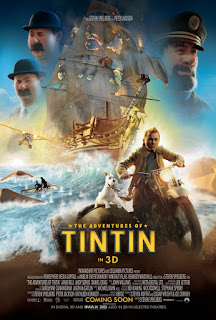 The Adventures of Tintin - Since we are talking Spielberg, I might as well get into this as well.  I loved Tintin.  It was a movie not without its flaws, but on the whole, I was amazed at the visual spectacle and was taken in quickly by the great story.  The major flaw for me was that within moments of the movie's opening, the main thick of the story is afoot.  Whereas I thought War Horse was a bit heavy on the character building in the beginning, I thought Tintin was a little light.  I am unfamiliar with the mythology of Tintin and other than learning quickly that he is a reporter and seeing on his walls the framed headline pages of some of his previous adventures, I knew nothing about him or this series.  I would have liked a little more background introduction to this world before things got moving, but I quickly forgave that as the story was riveting and the visuals were some of the best ever.  I am looking forward to more of this series from Spielberg and Peter Jackson.  That is a partnership made in heaven!  This film came off, of sorts, as an animated Indiana Jones, complete with John Williams score...I love Indy and I loved how great these scenes were constructed, both in terms of general visual appeal, but also in terms of the sense of adventure.  The movie was fun, funny, and exciting and I had a great time at the theater.  A 4.5 Horn score for Tintin...it was fun and regardless of some of the harsh writing critics, I think it is a film to behold. 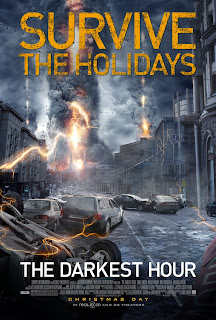 The Darkest Hour - I was looking forward to this flick, perhaps most of all of the holiday releases.  It seemed as though the studio was hoping for a hit, as well, scheduling a Christmas day release throwing this movie like chum into the shark infested water.  The Darkest Hour has been poorly reviewed and poorly performed against a huge battery of more appropriate films for the season.  BUT...it was a fun science-fiction release and I believe it is being unfairly raked over the coals.  This movie has a few impressive young stars, including one of my favorites, Emile Hirsch.  See also: Into the Wild, Speed Race.  He has charisma and he has talent; as do Rachael Taylor, Max Minghella, and Olivia Thirby.  Director Chris Gorak has an amazing resume as an art director and I believe that produce Timur Bekmambetov is a creative force just waiting for a HUGE breakout hit.  All of these factors together should have yielded a more commercial friendly film, but it just wasn't the time.  I do believe that this flick will have a huge positive reception overseas and that with time, it will be successful.  Successful enough to spawn a sequel, I do not know.  But the film is fun to watch and very high-sci-tech in concept.  In my opinion, this is how decent of a film the atrocity of Skyline should have been, and perhaps the post-apocalyptic fare is just not the thing at the moment.  I am also even more forgiving because there were a handful of moments that gave me a Ghostbusters-vibe, minus the lighthearted tone...and a Ghostbusters-vibe ain't never a bad thing :-)  Give this film a try and I do not believe you will leave disappointed.  It is the perfect length (just under 90 minutes) to be entertaining and not overstay its welcome.  A 4 of 5 Horn salute to this not-so-holiday, holiday release.
I have not had the chance to see We Bought A Zoo and it may not be in the cards for some time, as I have committed this film to my next "date night."  With scheduling conflicts afoot (no pun intended), it could be a few weeks before we get to Cameron Crowe's family friendly offering.
I will share that I am now addicted to MISO which can be found at http://gomiso.com a very cool social networking site for watching TV and movies...check it out if you like and feel free to follow me there as well.
With no new releases this week, and only some indies scheduled for this coming Friday, I do hope that my next few posts will pertain to The Reel Rhino YEAR IN REVIEW.  I will give you my movie going stats for 2011 and chip my bit to the pile of year-end specials covering my top 15 films of 2011 and my bottom 10 stinker list as well.
Until later, take care...
Reel Rhino
Posted by: Ryan M. Rezzelle