I hate this list with a passion.  Not the movies on the list, but making the list.  I truly believe that for every movie that is made, there are hundreds of people that care about it so deeply, that its failure is not only upsetting, but also heartbreaking (to them, that is).  Some of these films aren't financial failures, though, but fall more into the category of sellouts, which is almost as bad, some might say its worse.  For some of the sellouts and sequels that make the 'worst of' list, its not the disappointment those that made the movie I pity, but the fact that they have sold their soul for a paycheck in lieu of their place in Hollywood as artists.
2011 brought America its worst year at the box-office in 16 years.  That's not to say that I haven't done my part, making it to 130 flicks in the theater this year.  Given the awful box office season, it goes without saying that some of those movies would be bad...but others would out and out suck.
But this is purely my opinion...disagree?  Let me know.  But know this...I do the bottom 10 before my top lists, because I hate name-calling and blame throwing, and I want to get it out of the way.  For the sake of sharing my tastes, likes, and dislikes with you the Reel Rhino reading public, I may not like posting the BOTTOM 10, but I feel like its my duty...
To business:
____________________________________

10. Don't Be Afraid of the Dark - 2 of 5 Horns
This film was written and produced by Guillermo del Toro, but not directed.  His name was atop of every ad for this and one would have hoped that under his tuteledge, that director Troy Nixey could have delivered gold.  Not so much.  Inspired from a TV movie del Toro saw as a boy, his patented creature effects were here, but their ineffectiveness made them more comedic than frightening.  There were a handful of decent visuals, but all in all, this is a flop in my book.  Pan's Labyrinth was 100 times more effective as a visual thriller/horror feature.  The title is apt...you won't be afraid of the dark.

9. Red Riding Hood - 2 of 5 Horns
What was most upsetting, was the promise that the concept of this film showed.  It looked dark and foreboding in the trailers, but in its delivery, not so much.  I would have thought someone would have realized the acting by the B-players came off as excessively wooden and some of the cliche film making techniques would relegate this film to a campiness that is way too short of the fun that usually accompanies camp.  In the end, this Catherine Hardwicke added too much of what she gave us in the first Twilight, and the result was garbage,  In 2012, Hansel and Gretel should give us something along the lines of the darker spin on a fairy tale that this movie could have been.

8. 30 Minutes or Less - 2 of 5 Horns
This seemed like a funny premise, it had a good cast, and it had a pretty great trailer. Ultimately this movie is a waste of potential, both of cast and premise. Given the talent, including the sophomore effort from Zombieland helmer Ruben Fleischer, I think we all expected more.  There are certainly some funny lines throughout, but you of course saw them all in the trailer, and there were zero "piss-yourself-funny" scenes, which given the stellar set of ingredients, I expected nothing less.  There were also some serious issues of tone...there are some psychotically violent moments that were supposed to be funny, but come off as awkward, out of place, and, at times, downright uncomfortable. There are a lot of things wrong with this movie but perhaps the worst thing is that at 83 minutes running time, it felt like it dragged…a lot.  Maybe that was the problem...they left all the funny on the cutting room floor!  Better luck next time gang, and I mean that sincerely, since the talent pool in this film runs pretty deep, \they will all be back strong.

7. Final Destination 5 3-D - 1.5 of 5 Horns
FADE IN: One of the cast has a vision of a disaster, this time, it's a bridge collapse.  He quickly realizes that his vision is about to come true.
CUT TO: He warns everyone, a few people survive the ridiculously vicious disaster.
MONTAGE: They start dying, one by one.
ENTER FRAME RIGHT: Tony Todd is seen here or there, perhaps at some times, offering insight to the plight of the survivors.
ACT II: The dwindling survivors hatch a scheme to further cheat death.
ACT III: A twist ending gives death the upper hand.
ROLL CREDITS
You just saw this movie...other than the gymnast's death, which was both gruesome and ridiculous, this film was a stinker in 2-D or 3-D.  David Koechner could not help salvage this, and maybe Tony Todd can quit this series any get on with bringing us Candyman 4...or 5...or whichever they are on in that similarly terrible set of sequels.  How about a Candyman/Final D mash-up?  It couldn't be any worse than this...

6. Shark Night 3-D - 1 of 5 Horns
This could of been something decent, even though it was a blatant Piranha 3-D knock off.  If...and this is a big if....if this movie would have admitted what it was, a blatant copycat and cash grab at genre fun, its self-awareness could have been used to its advantage.  Who cares what it's copying, when you get "camp" done right, it just works.  There was nothing right about this movie, starting with the fact it was a near bloodless, no-F-bomb, boob-less, PG-13.  There is a shark night rap after the credits that was mildly amusing, but so many people were sprinting for the door, few got the chance to see it.  This thing was a steamer.

5. Dream House - 1 of 5 Horns
A movie directed by Jim Sheridan, starring Daniel Craig, Rachel Weisz, and Naomi Watts, has a great sounding line-up, but absolutely fails in its mechanics and delivery.  This movie failed on every level for me and it really got me thinking about the nature of films in general.  I see a Shutter Island like premise on the face of this, and while the combo is way short of Marty and Leo, I am sure that Dream House started with fairly lofty aspirations.   Even Director Jim Sheridan wanted his name removed from the final cut of this film.  I can forgive a filmmaker for making trash, when they can admit they have dropped a bomb.  But when will these studio heads learn that the art is best left to be crafted by the artists.  That's an argument that will rage for eons to come.  I would love to see Mystery Science Theater 3000 take a crack at this so bad it is effing awful movie.

4. Scream 4 - 1.5 of 5 Horns
The faces are new, the story is not.  Other than adding Twitter, Facebook, streaming video, and non-stop texting by all of the younglings, this is the same old story, rehashed.  I was bored by this movie...really bored.  One of my chief complaints is that while there were red herrings a plenty, there was barely a single time that someone dropped into PERCEIVED PERIL (i.e. cue the creepy music), that they weren’t engaged and/or killed by Ghostface.  How can you build suspense if you don’t juke right at least once, but actually drive left for the hoop?  The original title of my Scream 4 review...Yawn 4.

3. Pirates of the Caribbean: On Stranger Tides - 2.5 of 5 Horns
Yes, I am aware that a 2.5 Horn rating should perhaps not have made this list, but remember above where I talked about making movies with no soul....this is an example.  Actually, this is THE EXAMPLE.  This was pure cash grab...no sense of peril, no sense of excitement.  The only thing that makes it watchable is the HUGE BUDGET, which equals great effects, makeup, costumes, and production values.

2. A Very Harold and Kumar Christmas - 2 of 5 Horns
A sub-par entry into the H&K series, there are a few decent gags, but otherwise, this film falls completely flat.  This flick is saved from my top spot solely by the presence of Neil Patrick Harris, as everything this guy touches, seems to turn to gold.  This film is clearly a must miss....nuff said. If they think about going for a fourth, they better get their game back, for the first was pretty damn funny, and the second was funny....this one was just plain bad.
1. Your Highness - 1.5 of 5 Horns 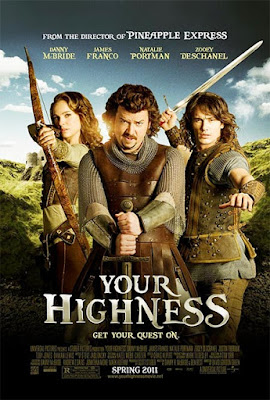 For my review of Your Highness, I quoted his highness, Sir Roger Ebert's, in his review: Your Highness” is a juvenile excrescence that feels like the work of 11-year old boys in love with dungeons, dragons, warrior women, pot, boobs, and four-letter words. One of the heroes even wears the penis of a Minotaur on a string around his neck. I hate it when that happens.
This movie blew goats, almost literally!  I think that the talent involved with this film is high, but were they, unfortunately, when they made it.  If this gang shifted gears away from telling jokes that only 10% of their audience (read: those high themselves when watching), they might get something going.  Maybe Pineapple Express was lightning in a bottle for David Gordon Green.  His follow up to this stinker, The Sitter was A LITTLE better, but not much.  Jonah Hill breathed a little soul into his character, soul that Danny McBride failed to find here.  The Sitter was better, but only a little.  I guess in comparison to this atrocity, Green couldn't have done much worse.  Please avoid this film at all costs.
So there you have it folks.  I'm going to go shower, to wash the stink from my body.  I'll be back soon with some of the year's highlights (IMO, of course)....until later, take care...
Reel Rhino
Posted by: Ryan M. Rezzelle

Email ThisBlogThis!Share to TwitterShare to FacebookShare to Pinterest
Labels: Dream House, Harold and Kumar, Pirates of the Caribbean, Scream 4, Your Highness