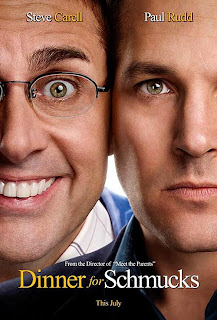 I have become less forgiving of film and television that presents its yuks and laughs at the expense of others.  Bullying.  It is a pervasive problem in schools across America and it is a sickening concept.  We walked out of Norbit several years ago, not because it was a terrible movie, which it was, but because it was a brutal portrayal of the bullying of a young child.  Perhaps in drama, on-screen bullying is more forgiving as it adds to the drama of the event; but when presented for the sake of comedy, it is not for my taste.
In Dinner for Schmucks, we are given a film that I feel is much different that what the crowds will be expecting.  The entire tone and flow of the film is not really demonstrated in the trailer and I think people will be surprised at how events play out.
The film is a remake of the 1998 French film, Le Diner de Cons, and Paul Rudd and Steve Carrell play our leads, with Rudd as Tim, a businessman who is trying to claw his way up the corporate ladder.  Carrell plays Barry, the Schmuck to Rudd's straight man.  Barry has an interesting hobby in that he practices amateur taxidermy and stuffs and dresses dead mice into dioramas that he builds.  His hobby is one of the most fascinating aspects of the film, and while it plays for laughs, his creations are quite beautiful and fascinating.

You have probably guessed that I didn't love this film.  In fact, I give it my just better than mediocre 3 horns of 5.  I think the trailer looked much funnier than the film actually is, and I think we may have the Director, Jay Roach, to blame. 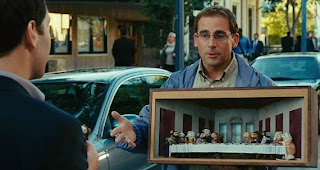 Roach brought us such favorites as Austin Powers: International Man of Mystery and Meet the Parents.  With each sequel in these series, the movies have gotten progressively worse, up to and including the awful looking trailer for Little Fockers, the third movie in the the Meet the Parents series.  The trailer for Little Fockers disheartens me especially because MEET THE PARENTS has always been a family favorite and creating sub par sequels waters down the whole package.  His role as producer in the cluster bomb of a flick, Bruno, tells me that he will sacrifice anything in the name of funny, and I think that is what we have here.  Too much of this movie is about the making fun of others, and not enough about the catharsis that comes about when the underdogs actually pull it off, and "save the day". 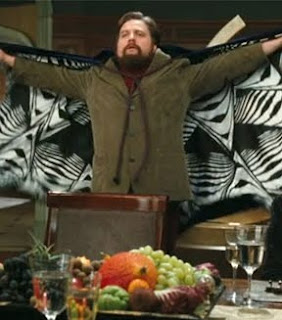 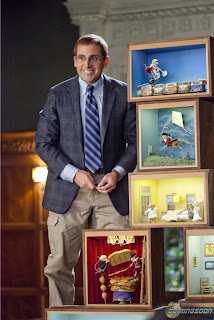 There is a great supporting cast in this flick, and while each has their moments, the entire flick plays better when thinking about it as a series of skits, rather as a full flow-through movie.
Zach Galifianakis plays Barry's boss Thurman and he plays this role differently than Alan from THE HANGOVER Alan, but funny in a unique way.  To this end, I think I enjoyed Thurman the most as a character, becasue this was a new perspective to a fresh actor who we have only started to enjoy.  I actually am not crazy about the early look at DUE DATE which pits Galifianakis with Robert Downey Jr., in a film directed by The Hangover's Todd Phillips....why, you may ask?  Because his character in Due Date looks like a similar role to Alan.  I enjoy seeing actors I like, spreading their wings a bit and expanding their talent base.
Jermaine Clement also was funny in the brief scenes he is in as the artist Kieran, but again, these are a sequence of skits that play individually decent but do little to help the movie as a whole flow.
I liked bits of this film. Carrell and Rudd each had shining moments, but given their track record, their bars are set pretty high.  This movie does not come close to the enjoyment level of Anchorman, 40-Year Old Virgin, or even I Love You, Man or Get Smart.  I think the "villains" of this flick, the corporate leaders at the financial firm where Rudd works, the group of guys who host the "Dinner for Schmucks," aren't punished enough for mistreating people as they do, nor the complete disregard for the feelings of others.  The catharsis isn't sufficient, so rather than leave feeling that just desserts have been served, you just feel like these guys are a bunch of A-holes. 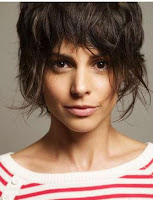 What a shining spot in this mess, Stephanie Szostak, who plays Julie, Tim's girlfriend.  She is French (I think) and she is lovely.  She has a pretty short resume and I think that although she has fairly brief screen time, that she will take the best in show in most people's opinions for this flick.
Kristen Schaal and Lucy Punch are both hilarious in their roles, Schaal as Susana, Tim's assistant and Punch as Darla, a stalker who just won't give up on Tim.  Both are hilarious and highlights of this otherwise disjointed presentation.

I think sitting here, thinking about the movie, it seems funnier than it was.  In fact, I don't know if a second viewing will give me a greater appreciation.  I will tell you, that I stand by that as a series of skits, it may pass as acceptable.  As a whole feature, it doesn't succeed.  The relationship between Barry and Tim is unbelievable and that lack of believability kept me caring less about everything.  If only Barry would have been just a little more believable and less cartoonish, I would have felt better about it all, I think.
3 out of 5 horns from the Reel Rhino.  See it if you like...you'll get a few laughs, but it falls short of being a wholly enjoyable picture.  I am going to see THE KIDS ARE ALRIGHT tonight and I hope that it brings more satisfaction than DINNER WITH SCHMUCKS.
Until later, take care!
RR
Posted by: Ryan M. Rezzelle