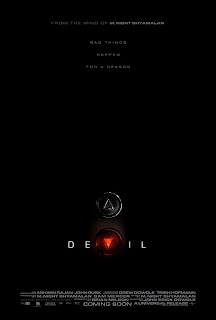 TIMECHECK: 1200 - Depart the workplace for a 5 hour decompression session...

First stop, Quiktrip. Objective: Sustenance (aka Club Sandwich) - Don't you judge me...their sandwiches are much better than you would ever suspect!
TIMECHECK: 1230 - Arrive at Merriam Cinemark for my first movie of the day.
DEVIL - Film #1 in The Night Chronicles ~ a new series "From the mind of M Night Shyamalan"  Yes, I got sick of seeing the trailer over and over and over.  And for M Night, after The Happening and The Last Airbender, I was fearing the worst.  But this is me and I am a huge M Night fan.  I was enthralled by him out of the gate with Sixth Sense (who wasn't!) and while many said he was on the decline after Unbreakable, I think he was hitting his stride, and Lady in the Water back from 2006 stands as my favorite M Night effort.
For my more recent feelings on M Night and the debauchery that was The Last Airbender...see also Reel Rhino - Will M Night Ever Get the Magic Back
Let me say that as a story teller, in my mind, the only misstep my favorite Pennsylvanian filmmaker has made was with The Happening.  He wrote it, he directed it, he made his bed and he had to lay in it.  His product was poor, but he believed in it and to that end, and I never thought that The Happening would lead to his unbecoming.  As for the THE LAST AIRBENDER...he didn't write it, but he owned it.  It was everything he wanted it to be and it failed.  Hopefully, M Night has learned his lesson...see also...

So M Night was running on a two film flop streak and when the trailer for Devil was playing (excessively I might add) people were groaning when they saw that line in bold:
"From the Mind of M Night Shyamalan"
I'll tell you a secret....when I saw that line, I actually got excited.  A thriller that was written by, but not directed by, M Night.  I had high hopes...I saw this as a grand chance for a rebranding and reemerging of a master storyteller and one who brings an immense passion to the art of making movies.
DEVIL DID NOT DISAPPOINT!
No, this was not The Sixth Sense and it was not Unbreakable...but it was really something fun! 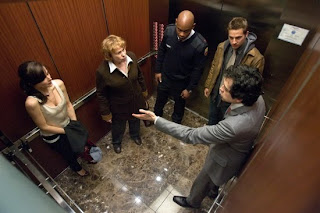 DEVIL is directed by John Erick Dowdle and the story by credit goes to Shyamalan with the screenplay credited to Brian Nelson.  The cast is filled with a spread of relative unknowns.  Bokeem Woodbine and Matt Craven are the only ones that jumped off the screen as recognizable faces and Craven is always a welcome addition to any cast for any movie I am watching.  Also, for you fans of Broken Lizard, you may also recognize the Snozzberry guy from Super Troopers, who runs an excellent turn at playing a creepy dude!
The trailer, for as many damn times as they showed it, did a great job of giving the set-up of the film.  Five people trapped in an elevator in a high rise building in Philadelphia.  One of them....drum roll please...is the Devil.  The plot is simple and straightforward and we are fortunate enough to a have a "crazy religious guy" who as a character, serves as both our narrator and as the guy that shares his unbelievable explanation for why things are happening, which nobody believes, but eventually is realized to be true.
I think the acting is a bit choppy and there were some edits that could have been a bit smoother, but overall this film succeeds in what M Night hoped to accomplish.  The tone is ominous and there are several story elements that are interwoven nicely including the "trademark" twist (Yeah! The M Night TWIST is BACK!). 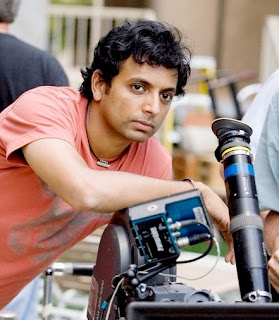 This movie, although not directed by Shyamalan, would fall somewhere in the range of Signs or The Village for his fare.  REEL RHINO says 4 out of 5 horns and also I offer a warm welcome to M Night Shyamalan for returning to something like his old form.

A very interesting aspect of this film is the running time.  80 MINUTES!  That usually qualifies for my "this is too short to be called a movie" speech.  In fact any time I can calculate how much it costs me per minute because of how short a movie is, I usually complain.  This story benefits from the short RT and outside of losing some of the buying power for this movie, I think it works here.

I am looking forward to THE NIGHT CHRONICLES 2 and 3...especially #3!!  This will be the unofficial sequel to UNBREAKABLE....from the mouth of M Night himself!
TIMECHECK: 2:17pm - Depart Cinemark Merriam, head North for the greener pastures of the Northland.

EASY A starts at 3:30pm, so in the interim, I stop by HvVee, have a piece of pizza, and grab some movie snacks.

I hit the library and borrow a book on Antique cameras.  I also hit up movietickets.com to buy my tix for the flick.  Life is good.
TIMECHECK: 3:30pm - Arrive at AMC Barrywoods.  I run into my old friend Mark, who is working the front desk.  He's lost 65 lbs and looks great.  If you read this Mark, great job and keep it up! 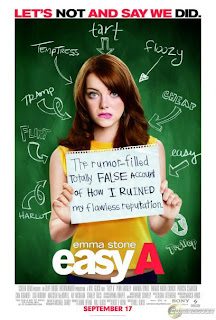 EASY A - This was a very fun movie that had me hooked from the first time I saw the trailer.  Who doesn't want to see any movie that rocks out POKER FACE in the trailer.  I will also admit here a slight crush on Emma Stone.  She is 22 years old folks, it isn't that wrong.  The whole case in this is phenomenal and the story is plain old fun!
Written by Burt V. Royal and directed by Will Gluck, this star studded cast, includes....wait for it....wait for it....Amanda Bynes's "return from retirement."  Everyone can breath easy, I know.
Easy A is told concurrent to the high school English class's reading of The Scarlet Letter.  Oh that adulterous HESTER!!!  For our modern tale...a lie is told, a rumor is started, and reputation begins to proceed our lead, Olive Pendergast, where ever she goes.  The movie is like a lighter-Junoesque exercise in "youth-talk" today.  Judging from the crowd reaction, many of today's teens thought it was spot on!
Olive spends most of the movie digging herself a hole, offering her "services" to those in need.  A sex act not really consummated, but instead only the stories to tell.  This is a movie about rumors.  Rumors that can make a high school existence more bearable, but also the rumors that like poison, can spoil the well and ruin things forever.  This story is much more a comedy than a drama.  You will laugh a great deal more that you think about the growth of these characters or really be concerns for them.  But, you do care for them, nonetheless.  You see these characters as gross-exaggerations of what they would be in the real world.  This is easy to forgive, though, because it is in fact a movie and it is so much fun. 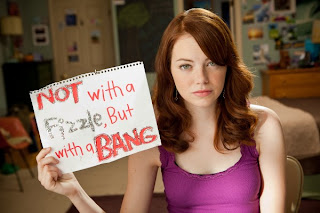 I enjoyed this film thoroughly and if there was a way to put a cash wager on Emma Stone, I would do it.  She is an up-and-comer and is not to be missed. (For essential Emma, see also Superbad, see also Zombieland, see also The House Bunny.)
Stanley Tucci and Patricia Clarkson play smaller roles as Olive's parents, and to some extent, they steal the show.  Granted, their earthy parenting choices and "we love everyone" attitude are very cliche, but they actually pull it off.  Each of their scenes felt more like a skits or a running gag through an SNL, but it made me laugh each time and their on-screen prowess made it work.
EASY A gets a 4 of 5 horns and earns a place in my fun flick category of the year.  It tonally reminded me of Fired Up, also a fun movie and in my opinion, very underrated.  Also, SEX DRIVE was remotely similar in feel and texture of the film, except I think Sex Drive was an R, and this is a PG-13, to appeal to the greater masses.

I will be seeing THE TOWN on Sunday.  I may sub in WINNEBEGO MAN  on a whim, as it is playing at the Screenland only this weekend.
TIMECHECK: 5:30pm - I arrive home and Jackson becomes the prime time show to watch.  What a GREAT KID!!!
TIMECHECK: 6:30pm - Tracie, Jackson, and I head to RIVERFEST in Riverside, MO.  It was fun, but too short for us as the little guy was getting sleepy.
TIMECHECK: 11:30pm - Watched THE JONESES tonight along with the back half of KISS KISS BANG BANG...oh how I love the movies!!!

The Reel Rhino signing off...G'nite! I'll see you after The Town.  Go out there and see something...anything!
Posted by: Ryan M. Rezzelle