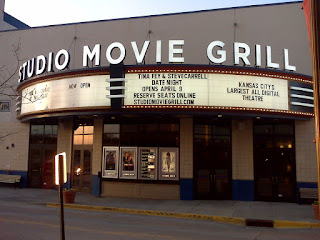 Well it seems that the end of a short lived era is over.  This is yet unconfirmed officially, but it seems as though the latest addition to the Kansas City movie scene has lost it's battle with mediocrity.  I don't mean that their location, services, or set-up were mediocre, but their selection was lackluster to say the least.
The SMG picked up the scraps of AMC Theaters as each were bound by a proximity competition clause.  I would have to imagine that the deeper pockets and longer lineage of AMC is what helped push AMC over the edge in the end.
AMC Barrywoods at the corner of I-29 and Barry Rd. passed on such films as Scott Pilgrim, The Last Airbender, and Killers, all of which were financially questionable and while I loved Scott Pilgrim, I would have to say it was the result of some kind of business savvy.
Yes, SMG Zona Rosa did carry such features as Eat, Pray, Love, Machete, and Takers, all of which have recently seen some financial success, but even though AMC Barry did not carry these either, many moviegoers opted to head downtown to the AMC Mainstreet which houses the coveted Cinema Suite theaters.  Even if a trip downtown wasn't on the menu, these moviegoers could also head East a bit and check things out at Dickinson theaters, located a short drive across 152 Highway into the heart of North, Northeast Kansas City.
Perhaps the biggest loss will be to that of the Horror Remix that SMG carried monthly, but I suppose we will survive.  I truly hope that this isn't indicative of Kansas City's ability to sustain the Arts, especially with so much potential on our horizon with the Performing Arts center and what I hope will be the continued proliferation of the Fine Arts Group of theaters and the Screenland Theaters spread around town.
Personally, I enjoyed having another option for my movie going, but that is me.  I will enjoy the expanded selection at AMC Barry, but I hate to see the fall of any theater, because you know those behind SMG only had the desire to create an enjoyable movie going environment for its patrons.
I say with sincerity, Rest in Peace, Studio Movie Grill Zona Rosa.
And to this not being "official," Studio Movie Grill has taken the Zona Rosa off of their locations on their official web page.  If I am wrong about any of this, I will retract, but the Reel Rhino is rarely wrong when it comes to the movies.
I wouldn't be surprised if they let this just slip under the carpet.  I'm sure it was pretty expensive, but I'm sure they will survive.
Long live the moviegoer...long live the cinema experience.
Posted by: Ryan M. Rezzelle