Hey Reel-Rhinoites, if you have the time, the SCREENLAND CROSSROADS will be the place to be tonight (Friday Sept. 24th).
Located in the urban-centric Kansas City Crossroads District at 1656 Washington, the Screenland is a single-screen theater and they have a spectacular FRIDAY NIGHT line-up.
This is perhaps my favorite theater in the city, thanks to the wide variety of great events they bring to town.  (Bruce Campbell screened The Man With The Screaming Brain here...that was enough to win me over!)  They also have a large banquet room that has several museum quality exhibits that are a tribute to Kansas City and our region's involvement in the film industry.
Tonight's screenings are just a sampling of their unique line of programming.  I recommend visiting the link below to learn more about this great theater and some of their other locations around town.  The Screenland Crown Center is a multi-screen theater and they too bring some very independent features and have very unique programming.  The Screenland Armour is located in North Kansas City...it was converted from an old Opry House theater and it is very ornate with a vintage art deco movie house feel.
BUT TO TONIGHT....I wish I could stay for all three of these, but at least I will be there to kick it off...
5:00pm: WINNEBEGO MAN - The 5 o'clock show is the only Friday night showing at the SCREENLAND and they are the only theater in town playing this hard to find documentary.  I am excited to see this and will have more to say on this later...
7:00pm: GREAT DIRECTORS - From IMDB: Great Directors, directed by Angela Ismailos, features conversations with ten of the world's greatest living directors: Bernardo Bertolucci, David Lynch, Liliana Cavani, Stephen Frears, Agnes Varda, Ken Loach, Todd Haynes, Catherine Breillat, Richard Linklater and John Sayles. The film documents Ismailos' voyage of discovering the creative personalities behind the camera.  This is the only place to catch this in KC...another great documentary that speaks directly to the wannabe filmmaker in me. 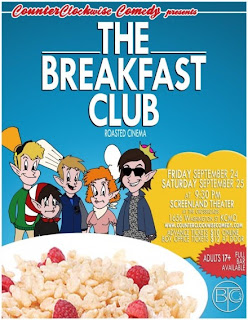 9:30pm: Screenland Roast: THE BREAKFAST CLUB - A proper roast from the Counter-Clockwise Comedy group from Kansas City.  They will give much love to this JOHN HUGHES (R.I.P.) classic in the form of rips and zingers.  I have heard great things about these roasts!  Don't you forget about them....this will be worth checking out!!  They will be there on Saturday night too, in case you can't make it tonight.  If you have NETFLIX WATCH INSTANTLY I also recommend checking out the unofficial John Hughes documentary: DON'T YOU FORGET ABOUT ME - lots of great interviews and a wonderful tribute to a great writer and filmmaker.
Find out more about the screenland at:
Screenland Theaters
Talk to you soon....
Reel Rhino
Posted by: Ryan M. Rezzelle