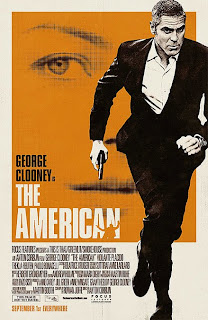 I had the opportunity after two consecutive 50+ hour weeks, to slip out from work early for a little movie time.  I was originally going to see Machete, which I will next week on a scheduled MAN DATE with a few co-workers, but with that on the horizon, I caught THE AMERICAN instead.
THE AMERICAN is the story of an aged assassin who is unsure as to how or if he wants to finish out his career.  It is the story of a man seeking love but sowing the fruits of leading a life of crime and murder.  As this assassin is our protagonist, we sympathize with him, regardless of what he has done or what he will do.
THE AMERICAN stars one of the most recognizable Americans in GEORGE CLOONEY and he is the only recognizable face in the film.  In fact, if you were to insert an Italian lead, you would have a moderately enjoyable Italian production as Italy is also the primary setting through the film.  But that Clooney as the lone American is markedly an outsider in this land and this is much in part to what gives this film its stiff line of suspense.
Yes, this is a suspenseful, Hitchcock-esque thriller and it delivers in every way.  Much of the suspense is drawn from Clooney's Jack, who is extremely paranoid.  His paranoia is justified to the viewer from the first moments of the film.  That we see early on that he has every right to be paranoid and this justification keeps you on the edge of your seat throughout the film. 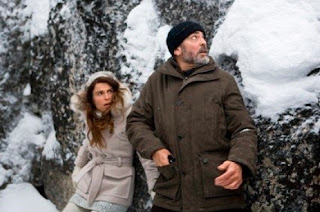 Clooney is at his finest here and he brings great moments of pause and suspicious curious glances that successfully build tension.  Add in the aura of sepia toned small town Italy and you have a perfectly presented film.
This movie is brilliantly shot.  There is always a building corner or window curtains blocking your perspective so you are as unsure as Jack as to what may be lurking. 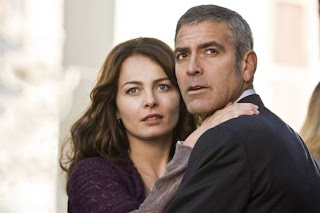 The rest of the cast hails from overseas, it would appear, and Clooney as the only American is seemingly from where the title is drawn.  To that end, there are a variety of very lovely foreign actresses in this film, including Irina Bjorklund (Sweden) as Ingrid, Thekla Reuten (The Netherlands) as Mathilda, Violante Placido (Rome, Italy) as Clara.  The women of this film play a crucial role throughout and all three are featured in both a very sexy and sometimes very nude presentation.  Lots of sex scenes ahead...leave the kiddies at home.  Also, for the ladies, a Clooney upper butt shot along with many Jack Lalane-esque push-ups and pull-ups. 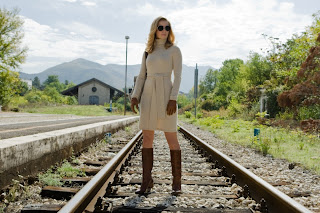 Not having looked into it, I would be willing to say that Mathilda is a direct tribute to the Natalie Portman character from Leon aka The Professional, in name at least, being that there are similar themes running through each film.
I think that other than Jack, my favorite character was Father Benedetto, played to perfection by Italian actor, Paolo Bonacelli.  He is a priest who although has comes to terms with his life, has a history.  He sees the tortured soul of Jack and relates and he reaches out to him in Clooney's early moments as a foreigner in this foreign land.  Jack has a mixed reaction to the father, of both cynicism and thanks for the friendship he extends.
The final role of note is Pavel, the gray haired, gravelly voiced handler to Clooney's Jack.  His voice is haunting and his presence is intermittent as he is much like Jack's agent, providing him with opportunities for employment.
I enjoyed this film to a great extent and I recommend it highly.

Subsequent to my original post, I had a discussion about this film with a trusted film friend, with whom I often see eye to eye.  We saw things differently here and I don't say that to point out either of our shortcomings as film goers, as we are both self-admittedly, very easily entertained.  Instead, I say as I always do, I love the discussions that movies stir up.  Dan, aka Papa, shared with me that he saw the plot as unfolding WAY too slowly.  I can see his perspective, but I rebutted this in my perspective that the narrative chosen by the filmmaker is attributed to the slow burn tense thrills in this film.  I think that this was completely intentional by the filmmakers.

What I couldn't argue with Papa was our discussion about a specific plot line in the flick that really had no resolution.  While this particular plot point dangled in an awkward manner, there is actually a great amount that we DON'T KNOW about this Clooney's character and his story that is unfolding, even by the end of the film.  What we are seeing is very much a story fragment.  We are dropped into this in the middle of his life and we know very little.  When the story ends, we are without much of the information we need to figure out who is good and who is bad...but the key is that we sympathize with Clooney.

In any film, a picture is painted for who we should care, who we should hate, and to some extent, what we should feel.  Film is very much propaganda used by artists to get you to see things a certain way, namely, theirs.  Every filmmaker has a vision for how a film will be interpreted.  An apt comparison are the actual propaganda films used by both the Germans and the Americans during World War II.  There is no question what these films tried to accomplish and from a current perspective, there is no doubt as to which were morally correct and which were corrupt.  Am I making a point, or just babbling...perhaps a bit of both...but the upside is, I have no doubt that it will be a very short while before Papa and Rhino see eye to eye once again.

Back to THE AMERICAN...I saw this in the AMC ETX and my thoughts on this matter are no secret (The Reel Rhino on ETX).  I will say that without comparison, there were some well recorded moments in this film when the sound presentation was vital, as an element of the mystery of the unknown.  I enjoyed these moments and the ETX presented them excellently, but this one check mark in the plus column is not yet enough to win me over.  I'll take IMAX Digital every day of the week.
THE REEL RHINO gives THE AMERICAN 4.5 horns of 5.  Go see this in the theater...the tension and suspense are played superbly on the big screen.  Although, alone in your living room on a dark stormy night would also be a great way to watch this. 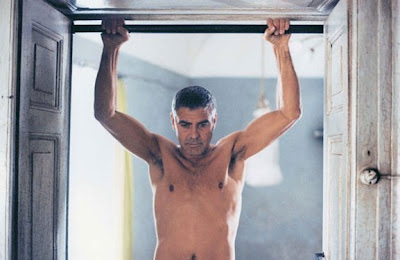 You can sleep easy, knowing Clooney has done it again.  Much credit to director Anton Corbijn and screenwriter Rowen Joffe for crafting this well told thriller.  The American is based on the novel, "A Very Private Gentleman," by Martin Booth, and well-renowned British novelist and it has been converted nicely to film form.
Get out there on this long weekend and catch something....INCEPTION and SCOTT PILGRIM are my favorites of 2010 so far...avoid The Last Exorcism and see this or take in the wonderous joys of Robert Rodiguez's MACHETE!  (SEE THE TRAILER BELOW) I'll catch you up on my thoughts on it next week!!!
Enjoy and take care!!
RR
Posted by: Ryan M. Rezzelle