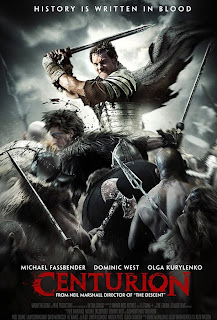 What a great opportunity!  I am a huge Neil Marshall fan and I stumbled across this flick over the weekend.  CENTURION is currently available ON-DEMAND and it will be released in theaters on AUGUST 27th, 2010.
I love getting the chance to see movies before they hit theaters LEGALLY!  I really don't understand the whole pre-release process.  I have a feeling that studios will gauge the size of a planned release based upon the success of a movie in pre-release.  To that end, while I love seeing movies in the big house as opposed to my house, I feel like seeing movies I like ON-DEMAND actually helps the film makers.

NEIL MARSHALL has a very limited filmography.  His feature-length directorial debut was 2002's DOG SOLDIERS, a BRITISH production featuring a Scottish band of soldiers who are engaged in a military exercise, meet with some trouble under the full moon.  Yep, a werewolf flick that is absolutely awesome!

2005 brought Marshall's first mainstream theatrical release, DECENT, although we (Americans) didn't see it until August of 2006.  This horror film was well received critically and deemed by many movie goers as "THE SCARIEST MOVIE OF ALL TIME!" 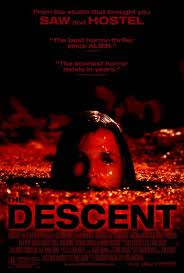 I am sure that the holder of the title The Scariest Movie of All Time is very open to debate, but it is certainly an exercise in claustrophobic film making that is executed with perfection AND with the desired effect...fright...lots and lots of fright.  It was funny when this was released in theaters because it actually had two waves of release, the later issue featuring the original ending deemed TOO FRIGHTENING for American audiences. Really MPAA?  Too frightening? Really?  Pretty funny thought, isn't it?  The budget for THE DESCENT was $5.5 million and it turned $26 million in the States, a Worldwide gross of $57 million, and has done $22 million on DVD to date.  Not bad, huh?
Pretty damn good by even the strictest of standards!  Marshall was soon after green lit for what would be his most ambitious and expensive film to date: DOOMSDAY.
I have touted DOOMSDAY before and I will again here.  It features Rhona Mitra, who was also Kate Beckinsale's replacement in the UNDERWORLD series.  DOOMSDAY is a futuristic action thriller where a team of military personnel, including a bad ass Mitra, work to save humanity against a dangerous threat.  It is a movie with several tonal, tempo, and production design shifts that serve the story very well.  She plays of sorts like a female Mad Max, hell bent on success, so that she may save humanity.  She is to find the leader of one of two barbaric factions at war with one and other.  Kane, played by Malcolm McDowell, holds the key to survival but is he too consumed with the war on his son's faction to be concerned about the rest of humanity?  This is a fun movie that combines elements of some of our favorite post-apocalyptic fare in a beautiful contrast of the variety of calamity one would find in a world with no law and absolutely no order.  If given the chance...check out DOOMSDAY. 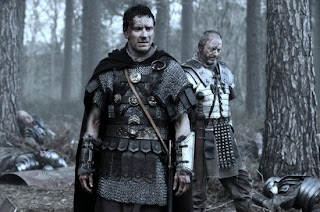 Now DOOMSDAY is likely the reason for the pre-release of Centurion.  Doomsday had a $33 million budget and made only $10 million in the US, $21.5 million Worldwide, and has to date only drawn $8.5 million on DVD.  Due to this lackluster return on his first big budget fare, it is likely that the rise to the top for Mr. Marshall was put on hold.  Keep in mind, I loved DOOMSDAY and gave it a 5 of 5 horn review.  It was much better than it was ever given credit for, but none the less, here we are!
CENTURION tells the tale of the 9th Legion of Roman soldiers at war across the British countryside with a band of guerrilla warriors, known as the Picts.  The Picts are outstanding warriors who used tactics and the landscape to bring to a halt, the invasion of their home.  It is said near the beginning of the film, they fight with no honor, appearing in the night and disappearing just as quickly.  They introduced techniques of battle that were yet unknown to the Romans, and these techniques served them effectively well, creating a deadlock in this region that lasted 20 years.  This film tells the tale of battles that raged to end this deadlock. 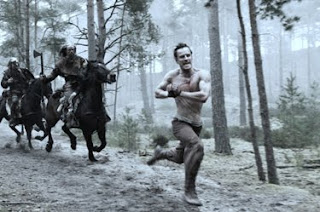 Our story starts with a fleeing prisoner, Quintus Dias, a Centurion in the Roman army.  He is on foot, running through the snow.  We learn from his narration that this is neither the beginning or the end of his story.  We fade to two weeks earlier when he is standing post at his fort...not as an assignment, but as a soldier standing in wonder of what this war will bring.  Dias is played by Michael Fassbender who is quickly making a name for himself in American cinema, most recently in Inglourious Basterds, that little Tarantino flick from last fall, but also in Zack Snyder's 300 and unfortunately, JONAH HEX. 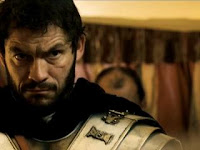 The post at which Dias is stationed as second in command gets ambushed by Pict warriors and he is taken prisoner.  He manages to escape and is only saved as scout of the Roman 9th Legion spots him, calls for reinforcements, and his life is spared by his Roman brethren.  The General in charge of the 9th Legion, and leader of the march headed into Pict territory is Virilus, played by Dominic West, previous McNulty of THE WIRE and less ceremoniously as Jigsaw, in PUNISHER: WAR ZONE. 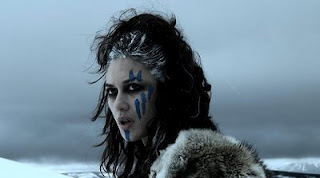 Olga Kurylenko, the former Bond Girl from Quantum of Solace, plays the ruthless woman warrior, Etain.  She is a fearless femme fatale and she has no speaking roles as we will learn later, her tongue was cut out at the hands of her enemy...but who is the enemy?  Etain proves to be a force to be a force to be reckoned with and her battle scenes are reminiscent of Ray Park as Darth Maul in The Phantom Menace.
Gorlacon, leader of the Pict army and King to their people, is played by Ulrich Thomsen.  He is wiry, but tough and he has a kick ass Fu-Manchu goat-tee that won me over quickly.
This movie is basically about two things: fighting and fleeing.  And I am talking long runs across mountain ridges, Lord of the Rings-style, type fleeing.  Heroes on the run as they are pursued by enemies of much greater numbers.  But that comes later and the largest battle, worthy of the best of epic battle scenes, is given to us early on.  Most of the later battle scenes consist of smaller numbers in hand-to-hand combat, which are very bloody scenes. 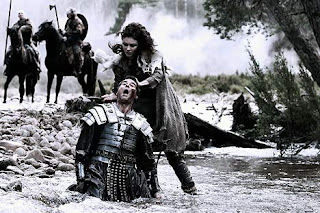 A comment about the blood.  It is pretty apparent that much of the bloodletting was digitally added.  It looks great though, and the battle gore is on par with any fighting flicks of recent days.  Make no mistake, this is a gore-fest to the nth degree.
So we have two things here...a tail of loyalty and bravery that leads to an epic mission, within an epic mission.  We also have well choreographed battle scenes that yield bloodshed on par with The Bride's decimation of the Crazy 88's, ala Kill Bill Vol. 1.  The story is easy to follow, but its shifts in direction come at breakneck speed.  We are given only one scene of character development with the small band of Romans that we follow throughout.  The on-screen action and also the narration of Dias speak volume to the Roman allegiance to God and Country, so character development is an unnecessary luxury.  This is a movie about duty and honer within the framework of fighting a war of questionable motives.
The Picts are portrayed as brutal, yet skilled, but how would you react to the advances of your otherwise would be conqueror.  The are brutal, but that doesn't make them wrong.  Don't worry, though, it becomes very clear as to who we should be cheering for and rooting against. One thing we learn quickly, is that the Pict warriors would sooner die than submit, so we have an antagonist that is the whole of their group, a worthy adversary to say the least. 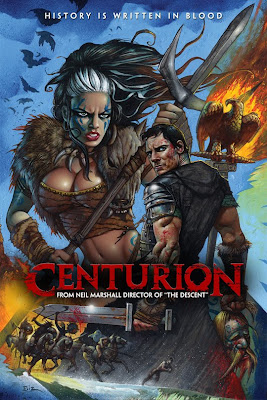 I really enjoyed what Neil Marshall gave us here.  It is fun, well-shot, features great costumes and beautiful sets, and perhaps most importantly, it has some very well-executed action scenes.  One scene in particular as the first major battle commences was quite cool.  I won't spoil it, but sadly, if you have seen the trailer, you know what I am talking about.
This film is quite bloody, but it only adds to the ambiance that comes with an otherwise drab toned film.  Perhaps the slate gray overtone was what made the blood seem oh so much more vivid and don't get me wrong, the color palate of this film was spot on.  It is well shot and well-fought and the end product is a terse 97 minute period action epic.  I think the running time contributed to the quick shifts in story, but it is to the movie's benefit as much longer action epics seem to occasionally become self-indulgent, which fortunately doesn't happen here.
The Reel Rhino rates this at 4 of 5 HORNS.  I don't know how many theaters will end up carrying this, but it would be an enjoyable watch on the big screen.  If not, check it out NOW as it is out there on VOD through a variety of cable companies and content providers.
Perhaps it was the poor performance of DOOMSDAY that led to this early release.  Doomsday is by my account a better film than the credit it has received.  For now, support a good film...check this out on VOD or at the theater when you have the chance.  It is a fun film that is set in another era, in another world to you and I.  Keep it coming Mr. Marshall...come hell or high water, I'll keep watching!
This is kind of a tweener review...The Other Guys left me wanting more for the weekend.  I couldn't leave my weekend movie series in the "just mediocre" zone, so I am very happy to have checked this out.  Next week I will be catching SCOTT PILGRIM vs THE WORLD (check out the trailer below).
Also, keep an eye out for my IMAX vs. ETX technology review that I can tell you now, is a lose lose for the consumer.  No matter the end to that story, we (the consumer) lose as prices continue to climb.  Hey, $9.99 to watch Centurion seems pretty damn affordable when you start thinking about it that way!
Till next time, take care!
RR
Posted by: Ryan M. Rezzelle