A Second Look at SCOTT PILGRIM and His World 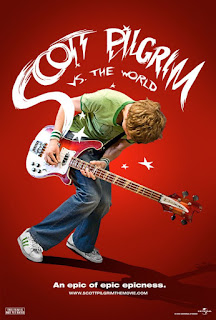 I have made no bones about the fact that Scott Pilgrim vs. The World is one of my favorite flicks of the year to date.  I am envious of Edgar Wright, for I truly believe that he has crafted a pop culture masterpiece.  Sadly, I think his film is reaching far too small of an audience.
I made my second trip to see this "epic of epic epicness" today and I must say, it was worth it.  You can read about my first trip here at Reel Rhino vs. Scott Pilgrim
There are nuances that I missed out on my first go around that I caught this time, but perhaps most importantly, this viewing in digital, which I recommend for anyone checking out the flick.
Without letting this film fade into the distance, and much like I did for my other favorite this year, INCEPTION, I wanted to point out some great supporting roles and talk just one more time about the movie. 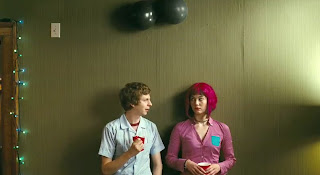 This movie is a relationship comedy adventure and Edgar Wright delivers on all three accounts.  I wouldn't call this a romantic anything, but instead I have chosen to use the term relationship movie.  I recalled from my first viewing that I didn't think the early set-up and attraction between Ramona and Scott was covered sufficiently for me to believe their romance.
(BRIEF MOMENT FOR A SUMMARY: Ramona Flowers is the love interest of Scott Pilgrim, who breaks things off with his high school girlfriend (he is 22) in order to pursue Ramona.  Ramona's ex-boyfriend, Gideon, forms a LEAGUE OF EVIL EXES to combat Scott and keep he and Ramona from dating.  Scott's HS GF is Knives Chau and she is exceedingly sweet and you can't help but feel for her in her heartbroken state.  Whew....) 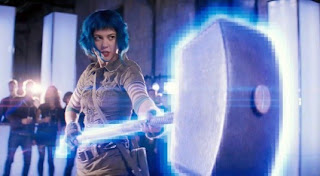 So, back to why I now believe in the Ramona - Scott deal. Basically, Ramona goes quickly from indifference towards Scott to bedding him over the course of one date in one evening.  This seems odd, because this very date, she says, has gone quite badly.  I thought this was the one flaw in the film until I pondered the issue.  Now, I usually save my pondering for more critical issues like world peace, the middle east, and the how to maximize my yearly tax write-offs; but for a movie this good, it seemed worth it. 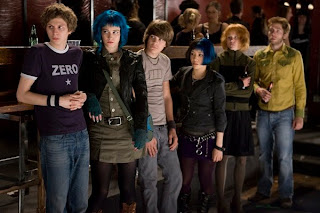 Here's what I came up with: the on-a-whim dating, the flip-flopping sexuality, the revenge seeking evil exes, and all of the joy and pain that accompanies it all -- this movie captures perfectly the essence of being a college-aged/twenty-something and trying to navigate the world of romance.  Certainly with to-the-death battles at hand, it can be argued that these are extreme circumstances hyperbolized for our entertainment and yes, Virginia, they do entertain.
On this logic, I forgive my initial thoughts that the relationship was poorly developed.  It may not be 100% believable, but this is a movie that wholly exists in a make-believe world.  For those that argue that Michael Cera could never land Mary Elizabeth Winstead....you fools know that love is blind....Hey, at least half the world dates upwards while the other half claims: LOVE IS BLIND! 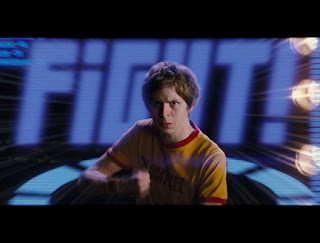 Liking this movie 100% depends on whether or not you like Michael Cera.  He is Scott Pilgrim and the things that he does are so fantastical, that if you do not like him, it will likely annoy rather than entertain you.  His fighting persona is more along the lines of NEO from THE MATRIX than the scrawny guy that he is.  That is not a shot at him but rather an observation.  I am a Michael Cera fan and while I thought he was great as Evan in Superbad among many roles, BUT...if this movie didn't exist, I can't think of a scenario in this world where I would have debated his kung-fu ability or his potential value as a sword-fighter.
Enjoying this movie is about having an OPEN MIND.  This movie is hip to the level of being self-aware and almost congratulatory, but the film deserves it.  Many love the masterpiece that is INGLOURIOUS BASTERDS, but we don't hold Quentin Tarantino in a bad light for self-declaring it a masterpiece.  Remember the scene where Aldo Raine actually says "I think this just might be my masterpiece."  This is Q's self-declaration of perfection and I think that Wright too realizes that he is toying with perfection as a product of EVERYONE who worked on Scott Pilgrim.  This movie is self-congratulatory enough and it is deservedly so.
My favorite FIVE supporting performances in this masterpiece were these: 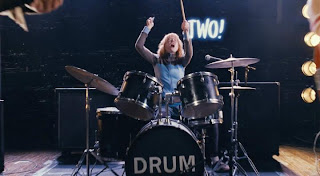 KIM PINE played by ALLISON PILL. I think it is her sarcastic and fiery attitude that makes her so attractive as a character.  She is an ex-girlfriend to Scott from their high-school days, and she has the spitfire attitude to get past it, but also to support Scott, albeit using sardonic comments or witty remarks about NOT giving a care one about him. 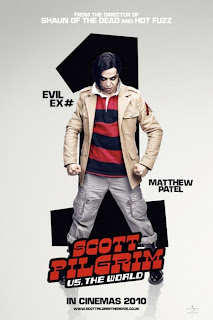 MATTHEW PATEL played by SATYA BHABHA.  The song that accompanies Mr. Pilgrim's bewildered battle against this mystically powered evil-ex of apparent Indian decent is classic.  A great musical number that is as much funny as it is a legitimate tribute to the Bollywood song and dance in their films...Edgar Wright nails this!  Bhabha plays this scene brilliantly and this is really the sequence that catapults the plot forward as up until this point, there has only been foreshadowing of battles to come. 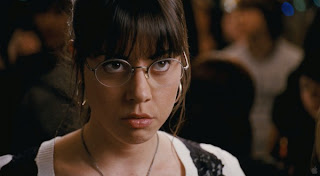 JULIE POWERS played by AUBREY PLAZA.  Julie shows up throughout the film and at one point Scott even asks: "Is there anywhere you don't work?"  She is funny and biting in her delivery and she plays the pissy emo friend like no other (that was a compliment, btw).  She doesn't have a lengthy filmography but she has been effective in her previous roles including PARKS AND RECREATION and MYSTERY TEAM.  I hope that her career will continue skyward because of her ability to deliver absolute deadpan insults that do have hints of care in them that make you THINK you should hate her all the while becoming more ENDEARED.

TODD INGRAM payed by BRANDON ROUTH.  I have decided that other than Ramona's fight scenes, that the TODD v. SCOTT battle is my favorite sequence of this film.  Brandon Routh is a hard actor to read. Routh had the physicality to play SUPERMAN, but many argued that he was too emotionless in the role.  I am a SUPERMAN RETURNS apologist and I really enjoyed Routh's turn as the MAN OF STEEL.  I also enjoyed his run on CHUCK and while I think that he does have a relatively monotone delivery in many of his roles, it is usually because he is playing characters that for various reasons are aloof.  I especially liked Routh in FLING which was also known as LIE TO ME, a dramatic romantic comedy of a movie that I am sure I was drawn to in some part because it was shot in and set in Kansas City.  Throw in the ZACK AND MIRI MAKE A PORNO cameo and I am in full on love with this guy, and no, not the same way that BRANDON ST. RANDY did!  Many seem not to like his style, but color me a fan, as I very much have enjoyed his films, and his turn as TODD INGRAM was classic.  It was fueled in part by the great lead-in song and comic panel editing and the fact that basically the entire cast was present and played off each other perfectly as the tension built up to the fight.  And the ending to this fight with the cameos and high concept comedy tied to the cameos...well it was classic! 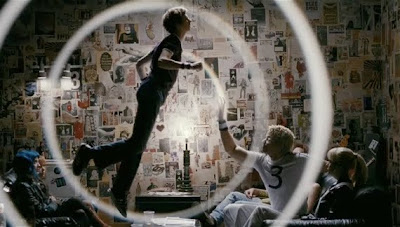 Finally, I give you KNIVES CHAU played to perfection by ELLEN WONG.  WORRY NOT to those of you who were worried you were drooling over this 17 year old...girlfriend to Scott Pilgrim as our film opens....Ms. Wong is actually 25.  As Scott describes his jailbait in the movie...."I am dating a 17 year old Chinese schoolgirl....and its a catholic school....with the uniforms and everything."  This role is catering to the anime/manga stereotypes that are pervasive in our culture.  Her role, though, is written with such care and attention to her heartbreak that you cannot help but empathize.  Who among us has not been heartbroken at some point.  KNIVES delivers her lines with pitch perfect pining that you want to do anything to help this forlorn schoolgirl get back her crush.  And as we see, she turns out to be one with whom not to mess.  Go get 'em, KNIVES!! 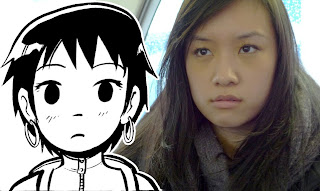 I guess if I had to choose a sixth favorite supporting member of this flick, it would be the music.  I bought the soundtrack as I was enraptured by this grungy sounding punk-pop.  I was pleasantly surprised to see that Beck recorded the studio versions of the Sex Bob Omb portions of the album and that most of the songs exist in their movie version and their studio version.  A great tune is Metric's Black Sheep which was sung in the flick by character Envy Adams (Scott's own Evil-Ex) with bassist Todd Ingram (Routh) and this song marked the start of the great VEGAN caper.  The 8-bit version of THRESHOLD, one of the main tunes running through the film, is a pretty wicked version and it sounds as though it was pulled from some great 1980's version of a NINTENDO classic. 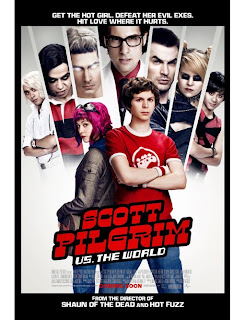 (P.S. ~ Right before I posted this, I decided also that Kieran Culkin's turn as Wallace, Scott's gay roommate, was also awesome.  Then again, there is very little in this film that I do not think is awesome. So I guess that makes seven supporting performances I couldn't live without.)

I loved this movie.  I loved it so much I thought I would pour some more work by my fat little fingers into pounding out REEL RHINO LOVE.

I said it before, and I'll say it again here: 5 OUT OF 5 HORNS from Reel Rhino.
SEE THIS MOVIE...don't regret in a year, when you do see it, that you missed the chance to see it in full digital glory on the big screen.
Till next time...RR
Posted by: Ryan M. Rezzelle