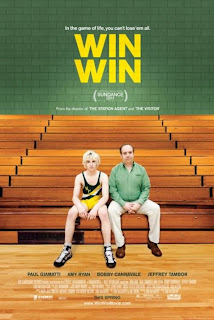 (See the trailer for this near the bottom of the page.)
I saw this film on the day it reached its high theater count, with 388 screens nationwide carrying the picture.  This is an injustice.  This film has made approximately $5.5 million, which given its severe limited release and stark advertising run, is not half bad.

This film demands to be seen and far too few people have since its release on March 18th.  $5.5 million in 35 days.  There are some big budget blockbusters that do that amount in 35 minutes.  It is a shame, because I promise this flick will entertain, at-or-better than most "blockbusters."
WIN WIN suffers from The-King's-Speech-Syndrome.  This is a new term, but not a new concept, in which a film is rated R, but at its core lives a more tame, family-friendly picture than the rating suggests.
Like The King's Speech, the problem is the Eff-Bomb.  You see in a PG-13 film, the filmmaker is granted a single Effer.  In both The King's Speech and Win Win, there are scenes in which the "tasteful" use of the word F***; makes for a great bit of comedy that fits perfectly with the storytelling. 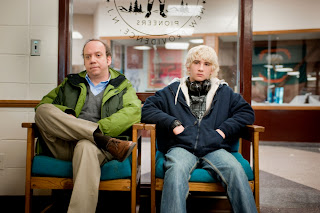 I forgive The King's Speech film company for choosing to water down the F-scenes to make a PG-13 version for re-release in theaters.  That too is a film that demands to be seen.
I don't image the same will happen with Win Win, but the fact remains, this is a movie to behold!  95% on Rotten Tomatoes; Metascore of 75/100; and a 7.9 of 10 on IMDB as of this writing.  Critics and fans alike agree...this is a great film.
I am in that mass who takes this opinion of unconditional praise.  Win Win is a pure 5 of 5 Horn movie for my tastes, and I think it will be for yours as well.
Sadly, most folks are going to have to wait until this film hits video and on-demand before having the opportunity to see it.  With a dwindling per/screen average, this movie is on its way out.  I am only glad to say I was able to see it in the theater.
You still have a chance!  Make you move...shoot the leg!
Yes, that is a wrestling term, because this is (to some extent) a wrestling movie. 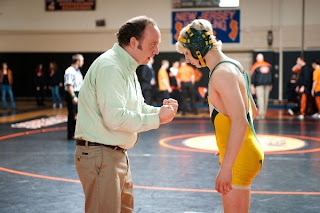 WIN WIN
I saw this movie Friday on a whim at the tail end of a visit from my folks. My dad is a kamikaze when it comes to early departures, and since he and my mother hit the road early, I was out the door as well for the bargain $5 show at AMC.

Win Win was written and directed by Thomas McCarthy. McCarthy is perhaps best known for his acting works as Dr. Bob from the Meet the Parents series, among his many roles. Honestly, as I hit IMDB to see his stats, I hadn’t realized that this Thomas McCarthy, whose additional work was The Station Agent and The Visitor, was so prolific. He wrote and directed both previously mentioned films. This guy has talent! He even has a “story by” credit on Pixar’s UP! 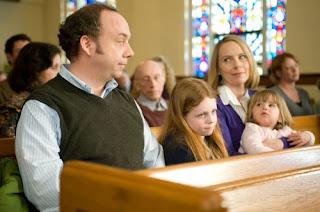 This is a wonderful film and I loved every minute of it. I do give some preference to Paul Giamatti as I do believe he is a treasure of modern cinema. But his slightly subdued everyman role is wholly believable here. His wife is played by Amy Ryan, who for all her beauty, is equally talented at becoming everywoman.  She and Giamatti transform into your neighbors, your friends, and your family.
Win Win is an indie drama built around the spine of a sports film, loaded with comedic wit. I have never been a huge fan of Greco-Roman wrestling.  Of course there was Vision Quest in the 1980's, but otherwise, when it came to wrestling, I was always more of a WWF guy.  As far as the wrestling goes in this film, you will want more.  The hunger that you have for a stronger ending to the wrestling story will be satiated by the resolution of the drama. 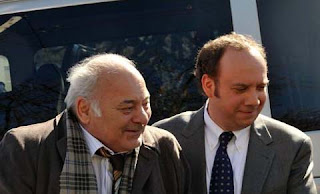 This is a great film.
The story centers around an attorney (Giamatti) who is struggling in his practice.  He has a client who is in the early stages of dementia and is about to become a ward of the state, as his only daughter cannot be found. Giamatti’s Mike Flaherty offers to become Guardian to old man Leo Poplar, but for the wrong reasons. The well-off Poplar has a stipulation that an administration fee of $1500 a month will be collected by the Guardian. 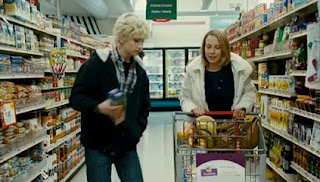 Leo Poplar is played by Burt Young. You know, Paulie from Rocky, Burt Young. I loved him in this film. It is a small role, but Young played it like a master. I was moved by his performance, which was accentuated by his very convincing old man looks.
Flaherty tells Poplar that the judge stipulated that he is required to live in an assisted living home, when in fact it was arranged so that Poplar could have lived in his own home.

To seal his deal, Flaherty runs by Poplar’s house to turn off his water to make sure his pipes don’t freeze. 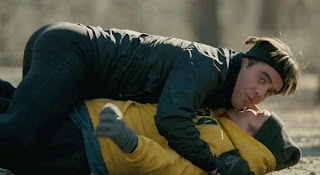 When he gets there, there is a boy sitting on the steps of the house. The boy, Kyle (Alex Shaffer), is looking for his grandfather, Leo. Flaherty obliges him with a visit to see Gramps.  Since Kyle is traveling alone and needs a place to stay, Flaherty takes him in.
Kyle’s mother (Melanie Lynskey) is in drug rehab, and Kyle is a lonely boy. Flaherty moonlights from his law practice as a wrestling coach, a former wrestler himself. Kyle asks Mike if he can practice with the team, and we learn fast that Kyle is a great talent on the mat.

This is the first movie for Alex Shaffer.  The filmmakers wanted a fresh face and they got it.  Shaffer has a dry, deadpan delivery that just works.  Also, he's a former championship high school wrestler.  He probably still would be, except for a broken L-5 vertebrae.  When asked in an interview if he will be able to keep wrestling, he said no, but probably will anyway.  His minimalistic approach works with double success as when he does get excited about something, it has that much more impact. 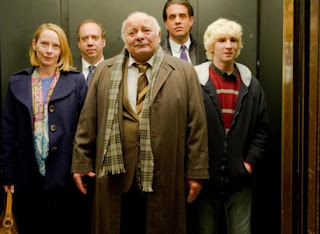 Mike has an entertaining assistant coach in Jeffrey Tambor, who as an accountant shares an office building with Mike's law practice.  Mike's close friend is played by Bobby Cannavale.  Cannavale is a love him or hate him kind of a guy with his Jersey accent and look-at-me macho attitude...I for one, love him.
Kyle's past as a troubled youth seems to melt away when he is tossing other young men around the gym. This is where the sports movie kicks in.
This film is insanely witty and well-paced. The drama picks up towards the end, but for the seemingly weighty content, it never becomes a downer. I found this to be “feel good” from start to finish. 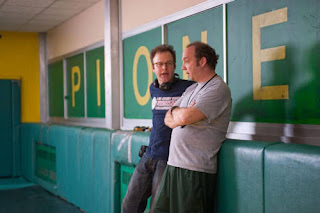 McCarthy is a genius and this film completes the writer-director’s trifecta of excellent films.  Make this your weekend choice if you can. I think Hop will take the weekend, but for my money, this would be my pick.
Win Win: 5 of 5 Glorious Horns
Posted by: Ryan M. Rezzelle