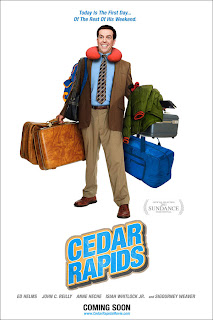 I tried hard ladies and gentlemen.  I tried as hard as I have in a long time.  I tried for the holy triumvirate.  Yep, I tried for a three-fer movie day!
It has been many days since I have been to three movies in a day.  Hell, it's been a long time since I have even seen two in a day.
I had hopes to go for the unspeakable 10 in 24 with the 10 Best Picture Nominees at the AMC Theaters Best Picture Showcase.  As a proud parent and husband, given the amount of hours I am away for work, shirking my familial duties for a straight day and then a day to recover.  Oh, but a boy can dream...maybe one day I will get to the Austin Draft House BUTT NUMB-A-THON...again, a boy can dream...
Here's how my little adventurous run at the three-fer played out(SPOILER ALERT: I don't make it...):
Friday, February 18th, 2011, 11:40am: CEDAR RAPIDS 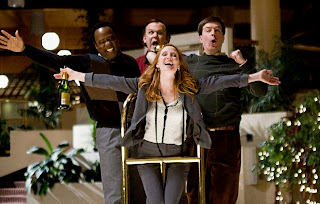 I had been excited for the release of this flick since I watched the trailer from afar, while KIMBALIANO was dishing all the dope on the SUNDANCE haps.  Yes indeedee, this flick was a Sundance premiere.
Many have seen the trailer and say it resembles something of a HANGOVER reprise.  The Hangover was a great film of the moment.  It has a place in the halls of comedy history and it will not soon be forgotten.  It may never be forgotten.  Cedar Rapids is no Hangover...
...but Cedar Rapids is a fantastically fun movie that has a pulse and a life force of its own.  The Hangover is hilarious for its malicious comedic BITE.  Cedar Rapids is a movie that has some bite, but also that involves you with the characters, rather than just laughing at them getting kicked in the balls or tazed in the face (although shiznit was pretty damn funny!).  The viewer relates to these "every"-people and you also happen to care about these characters while enjoying their wacky hijinx which fall into the realm of The Hangover-lite. 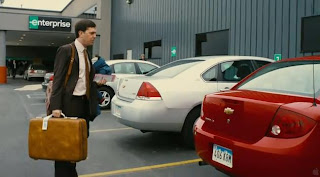 ED HELMS (aka Andy from The Office and Dr. Stu from The Hangover) plays Tim Lippe (aka The Lipster), an insurance salesman from small town Wisconsin, who gets called up to the big leagues when his office's #1 rep is killed in a tragic accident of unusual proportions.  This movie is the classic fish out of water story, as Tim heads to Cedar Rapids, even taking his first ever plane trip, to sweeten the "look at how innocent I am" pot. 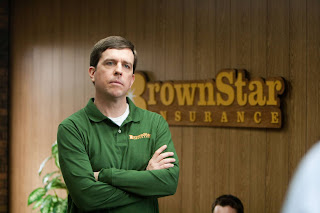 This flick is set in the world of the Midwest insurance industry, more specifically at the yearly AMSI conference in Cedar Rapids.  All of the Midwest insurance agencies compete yearly for the Two-Diamond award, which for the last three years, has gone to Brownstar Insurance, Lippe's home agency Calamity is afoot in Cedar Rapids, the absolute Amsterdam of the States as far as insurance sales folks are concerned.  The best way to describe this movie, is to introduce you to the characters.  Helms plays our lead, our hero, our North Star.  And while we have already talked about him briefly, I will say that I think Ed Helms can act and that he has a bright future ahead of him....as for the others... 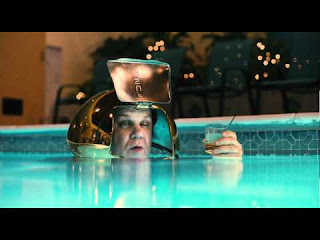 John C. Reilly as Dean Ziegler - Ziggy is the life of the party...he is the only person that Tim was warned to avoid.  He talks dirty and has a blast no matter what he's doing or how other people feel about it.
Anne Heche as Joan Ostrowski-Fox - O-Fox is the sensible one, but she will tell you outright...Cedar Rapids is her Vegas, and what happens in Cedar Rapids, stays in Cedar Rapids.
Isiah Whitlock Jr. as Ronald Wilkes - Wilkey is Tim's assigned roommate and he gets them upgraded to the Junior Suite...check out these digs!...Wilkes is very business minded but also extremely tolerant of Zigs antics.  Wilkes rounds out the trio with Ziegler and O-Fox as the Three Amigos and the question stands...will Tim make the grade and join the gang.  The running gag through the flick is Wilkes love of the HBO series The Wire...as featured prominently in the trailer.  Of course, Whitlock was one of the primaries on The Wire. 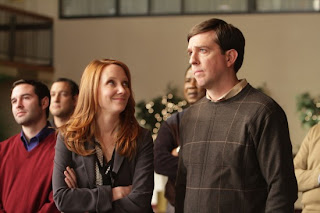 Sigourney Weaver has a supporting role as Tim's girlfriend, or at least what Tim thinks is his girlfriend.  Actually, she is a recent divorcee who is just doing the naughty with an old student.
Stephen Root plays Tim Lippe's boss, Bill Krogstad, and Kurtwood Smith plays Orin Helgesson, the president of the Insurance association hosting the conference in Cedar Rapids.  Both of these actors have given many fine performances in the past.  They are but props in this movie, really serving their role as far as needed, but doing nothing to greatly interest me in them at all.
The gem of this flick is Alia Shawkat, who plays Bree, the hooker with a heart of gold.  Yes, a cliched character if there ever was one, but she breathed new life into the role.  Shawkat is a force of nature who has been fantastic wherever she appears and Cedar Rapids is no different
This movie is not a straight comedy...it has moments of comic bliss while really tugging on the heart strings as you watch Lippe grow from his sheltered self into INSURANCE-MAN...it has a little drama and a lot of fun.


A 4.5 of 5 horn effort for Cedar Rapids, directed by Miguel Arteta, an indie-ful guy with movies in his filmography like Chuck and Buck, Youth in Revolt, and The Good Girl.  Written by Phil Johnston and parked on the Screenplay Blacklist in 2009, this script has a sensibility that divides and combines comedy and drama with a light touch.  I certainly did like the tone and presentation of CEDAR RAPIDS and heartily recommend this flick to you.
Friday, February 18th, 2011, 1:15pm: BARNEY'S VERSION 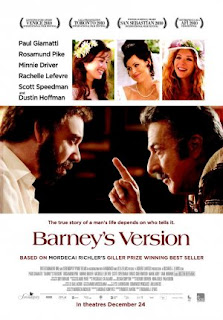 Let me first say that Cedar Rapids let out at about 1:26pm, meaning I was certainly going to miss the previews at the showing of this movie.  I walked out of Cedar Rapids and realized that I was directly across the hall from the theater showing Barney's Version.  Oh boy, what a dilemma.  Do I do the two-fer-free-fer?  Of course not...the Reel Rhino don't roll like that (and by God, I savor those damn ticket stubs!).  I hit the Customer Service desk and grabbed my ticket and boogied down to the theater...just in time!
This is an ensemble piece of sorts, led by the titular Barney, as played masterfully by Paul Giamatti.  I was sitting in this theater, watching his wonderful performance and I couldn't help but think back to his days in the mid-90 when he was primarily a character actor (see also: Howard Stern's Private Parts where he was 'Pig Vomit').
The movie itself is the story of Barney Panofsky.  If Barney was a real person, this movie would play very much like a biopic, as most of what happens throughout is not crazy to consider as the sum of a real person's life.  Since we know it to be fiction, it is a well woven tale of love, life, and loss.

The film is directed by Richard J. Lewis, who has had a long and successful career in television, which could be the primary reason why the scenes with Barney at work, running his production company "Totally Unecessary Productions," was so realistic.  In the film, T/U Productions was responsible for one of the longest running shows on TV..."O'Malley of the North," a show about a Canadian Mounty and all his mis-adventures...yes, this film is set in Montreal.  Barney is extremely successful in life and that Giamatti is so likable in general, it is not hard to fall in love with this character and this movie.

There are asshole moments where you do, in a flash, despise Barney, or at least disagree with some of his choices.  But as a movie that is really just follows the life of this man...you can't help but root for him.  There is enough drama to keep things interesting and the writing is such that you will laugh and perhaps cry.


This is a weighty movie but worry not about Giamatti carrying the brunt of the load, as he has a load of help...
Giamatti is supported by Dustin Hoffman (great work...loved every scene with him!), Minnie Driver, Scott Speedman, Rosamund Pike, and more.  Rosamund Pike becomes his wife, about midway through this film.  Until this movie, and other than her stint in An Education, I have always thought she was a bit wooden...not here!  Pike is fantastic as Barney's wife, and while the payoff is great when we get them together finally, the tragedy of what follows strikes a heavy blow. 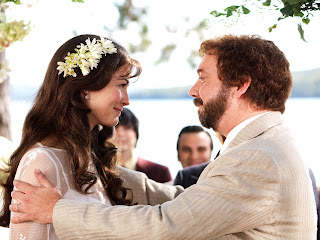 As a side note, while watching I got thinking that no matter how much you like a character, it is all the more heartbreaking to the viewer, when the complete some unforgivable act, but it is so much more devastating, when the victim of their act is an innocent as well.  Just a small aside, but I guess if we didn't have controversy in the lives of our characters, we wouldn't have films as everything would be too boring.
The movie is bookended by a murder mystery in which Barney is the prime suspect.  The film opens with an old Detective (Mark Addy) confronting Barney at Grumpy's Bar (his appropriately named nighttime hangout) and while we don't immediately learn the details, we wonder from the word go, how will this murder fit into the tale.  After we come to meet Barney and this detective, we shoot back in time to the mid-70's, in Rome, where we meet a younger Barney and our story starts to unfold.  We tag along with Barney in linear fashion through his life from this moment forward. 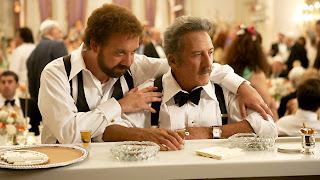 I very much liked this movie and there were moments of great comedy and great tragedy.  The line about the Rabbi's wife...you'll know it when you hear it...sharp, biting, and vulgar, it is both hilarious in its filth to hear spoken and endearing in the love it shows for a father.
4.5 horns of 5 for BARNEY'S VERSION.  It is a bit long at 2 hrs and 13 minutes, but I really didn't feel its length for the enjoyment of the film in general.
Oh, and as for the three-fer....it didn't happen.  Around halfway through the movie I got a call....we were waiting on a search warrant for a crime scene....oh but for work to interrupt an otherwise fantastic day.

As my friend, THE G MAN once said ..."We knew the job was dangerous when we signed on...".
Oh how he was right....
I am Number Four and Unknown reviews coming soon...as soon as I can take a nap, play with my boy, do some husbanding, and then hit the theater again....
Until later, take care!
RR

(PS: The Blogger spellcheck replacement for FILMOGRAPHY is FLAMEPROOF.  Heeheehee. It made me laugh and I wanted to share it.)
Posted by: Ryan M. Rezzelle