As I sit here, watching this all-Bieber inspired episode of GLEE, I am questioning the meaning of life, because Justin Bieber just inspires that kind of thinking...no thank you. 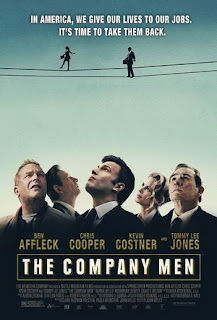 I went and saw THE COMPANY MEN this weekend and when I was chatting up one of the AMC folks, another of the AMC faithful excitedly asked me if I was going to see the Bieber documentary.  I answered a resounding NO, and she went on to regale me of the merits and true talent of Justin Bieber.  I followed this up with the question: "How old are you?", fully expecting her to say 16 or 17...nope, she was 21.  Yikes.  No thank you, I'll say Bieberless for now.
THE COMPANY MEN was another story, though.  Yes, this flick splits the divide between depressing and uplifting.  Yes, to the average moviegoer, feeling sympathy for a man for having to sell his Porsche in order to make his mortgage, it didn't really resonate.  But when you see this man...Ben Affleck, a solid everyman in any role, fighting to keep his family happy, I think it actually works.
Tommy Lee Jones, Chris Cooper, Craig T. Nelson and Ben Affleck are all attempting to navigate the daily grind of surviving the recession our economy has been enduring for years.  Some of them are at the top and some of the bottom and they all seem to be operating in a tax bracket that few of us can relate to (but that's life in public service, I guess).  They all play their roles to perfection and in a turn as the blue collar brother-in-law, Kevin Costner adds some enjoyable scenes to this flick. 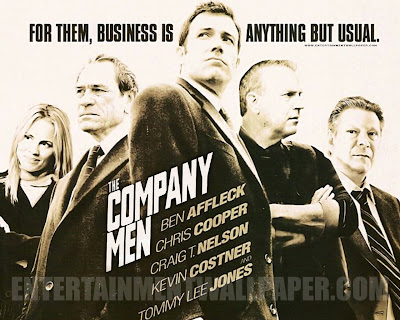 A much more inspiring offering than Up In The Air, which was one of my 2009 favorites, The Company Men offers the hope that Clooney couldn't find in the Air.  Both flicks deal with loss and surviving upheaval in what seem like insurmountable odds.  Up In The Air offers some closure in the form of self-realization, but what good is self-realization when the audience doesn't get to partake in the catharsis?  In Company, we endure with Affleck.  We go off to hang drywall with him, and we ultimately follow him through to his rebirth.  Air was enjoyable for its bleak tone, but there is something to feel when you get to rise with the phoenix. 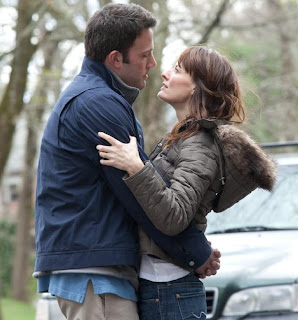 The Company Men is an adult drama that plays well from start to finish.  Rosemarie Dewitt is spot-on perfect in the role of the supportive wife.  In addition to her superb performance here, I find her extremely watchable in everything she is in, including Rachel Getting Married, in the titular role.
The Reel Rhino says, 4 of 5 horns for this part-time bleak, part-time uplifting look at the tough economic times that is our America.
In the past two weeks, I also had the chance to take in SANCTUM and THE MECHANIC.
Both were completely watchable with merits in their presentation, while sadly maintaining a way of being generally forgettable.
The Mechanic was essentially TRANSPORTER 4.  Jason Statham doing what he does best: kicking ass.  I enjoyed Ben Foster and I do suppose he continues to display the kind of skills that will elevate him into the action-hero genre.  But again, it was standard Statham.  Who doesn't like it, but we have seen it before.
SANCTUM looked beautiful and James Cameron knows it.  Sanctum was thoroughly enjoyable, albeit standard, survival story-telling.  The film was shot on Cameron's patented 3-D camera system and while it made for a real pretty picture, I didn't feel any more than standard peril or pity for these stranded spelunkers.  I feel bad saying that as it is based on real events, but while any tragedy deserves true mourning, this film tells the story in only mediocre fashion. 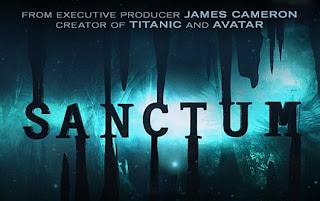 Both The Mechanic and Sanctum get 3.5 of 5 horns from The Reel Rhino.
I hope to make CEDAR RAPIDS, I AM NUMBER FOUR, and UNKNOWN this weekend.  I haven't pulled a three-fer in a long time and with the 80 hour week I put in at the shop last week, I am pulling for an early departure on Friday.  Also on my radar are the OSCAR shorts programs (animated, live action, and documentary) playing right now at the Tivoli here in KC.
We shall see...
Until later, take care!
RR 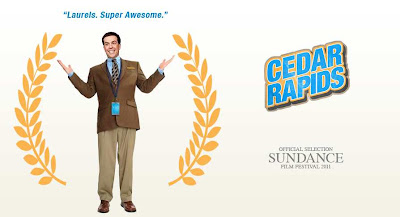